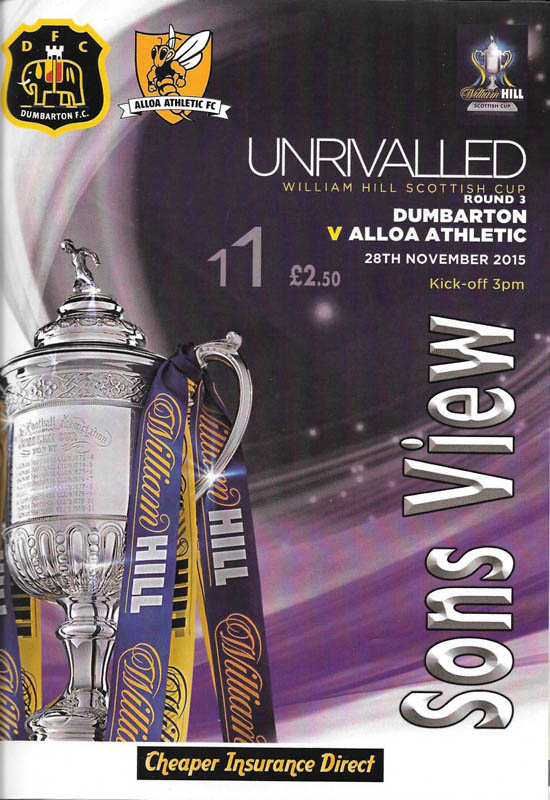 THE Scottish Cup doesn't have to produce a giantkilling act to make it a game to remember.

Not when you win 5-0 and a product of the club's youth development initiative scores after 19 seconds of his first start.

Donald McCallum certainly won't forget it in a hurry. Neither, for that matter, will any of the other goalscorers.

Garry Fleming put himself further clear as top goalscorer, while Jordan Kirkpatrick (twice) and Calum Waters each made a statement after coming off the bench.

By the time referee Stephen Finnie's whistle had stopped echoing, McCallum had Dumbarton ahead. When Fleming made it two after 13 minutes, Sons were right in command.

They weren't always on top in terms of possession. Alloa had their spells in the game, but against a strong home defence, they were light on clear chances.

As the final 15 minutes arrived, it looked like the Wasps would escape with the same 2-0 defeat that they sustained in the Championship three days earlier.

But the substitutes had other ideas, and this turned into the sort of result that should really breed confidence.

And with two league games now imminent against sides battling with them in the lower half of the Championship, it could hardly be better timed for Sons.

Saturday's victory over Alloa took its time in coming. This one certainly couldn't be accused of doing so.

Kick-off was taken, the ball was briefly passed around, Kevin Cawley played a low ball through to McCallum, who wove past the defence and finished. It really was that simple.

Goal number two was not far away either, and it, for different reasons, was a special one.

An excellent team move, from defence to attack, ended with Grant Gallagher sending over a low ball which Fleming couldn't fail to put away.

The first half then progressed fitfully, with Alloa's attacking threat in some evidence, but twice Mark Brown saved well from Michael Duffy.

Cawley was closest to making it 3-0 in the first half with a close range shot which the keeper turned away.

But it was Brown who was on form again early in the second half, keeping out Duffy's effort from close range.

Had that gone in, the game could have changed. As it was, Sons saw it through without looking too likely to add to their lead.

That was until the 78th minute, by which point Kirkpatrick had settled into the action after replacing McCallum.

After Cawley laid the ball off for him inside the area, the forward posted his first goal of the season with a well-placed bending shot.

Just afterwards, Dougie Hill looked to have pulled one back for Alloa but Gallagher cleared his effort off the line.

And with two minutes left, Kirkpatrick's fine run after a midfield interception ended with him squaring for Waters, who snapped up his first goal for Sons.

The demolition job was not complete, though, as with the final whistle imminent, Kirkpatrick's shot was powerful enough to roll under the keeper and into the net.

Despite three games in seven weeks, including two fixtures after days at work, Sons are braced for more. They may have found their shooting boots just in time for some big games.