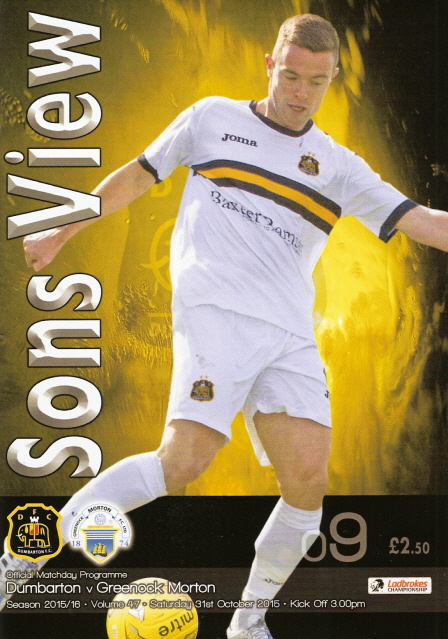 THEY say that once Halloween's out the way, you can get into the festive spirit. But Dumbarton didn't even wait until October 31 was out before giving out a gift which condemned them to another defeat. With five minutes remaining of a scrappy match, a hopeful long ball forward by Morton ended with Denny Johnstone tapping home what proved to be the winner. The striker was given an unguarded net to place the ball into after a mix-up between keeper and defence meant an easy finish from Alex Samuel's low ball. The Greenock side had taken the lead through Joe McKee close to half time, but Darren Barr's equaliser early in the second half looked to have claimed a point. A draw would probably have been the fairest result, but after losing to such a huge communication breakdown, Sons once again were left to analyse where it went wrong. Both sides would have come away from the game feeling they can play better. However, Morton ended up with three points while their hosts had none. And after an eighth league defeat in 10, Sons need to get out of the losing habit quickly.

They did start fairly promisingly, with Eamonn Brophy's shot on the turn saved, before the same player sent a narrow angled drive across goal after having to go it alone from out wide. Minutes later Johnstone set up Stefan McCluskey to charge into the area, but his shot was off target as well. However, Morton had better fortunes four minutes from half time after a corner was only half cleared. The ball fell to McKee who, from 20 yards, blasted home a low drive. Garry Fleming had the chance to send Sons in at half time level, but sliced his shot wide.

But eight minutes after the restart, the level scoreline was restored after Willie Gibson's free kick caused panic in the Morton area. Barr scooped home the loose ball, and drew himself level with Fleming and Gibson as Sons' top league goalscorer this season. There were not many chances for either side to grab a winner, with McKee seeing another low drive saved by Mark Brown, while at the other end, Fleming narrowly missed out on connecting with Donald McCallum's cross. He then did brilliantly to control Gibson's high ball in his direction, but dragged his shot wide. And with five minutes left came the winner – for Morton, and out of nothing. Samuel got to a long ball ahead of the defence and with Brown stranded out of his goal, there was only one outcome when he found Johnstone six yards out. Sons may have conceded three goals fewer than last week, and scored one more, but this defeat hurt every bit as much as the Falkirk reverse.