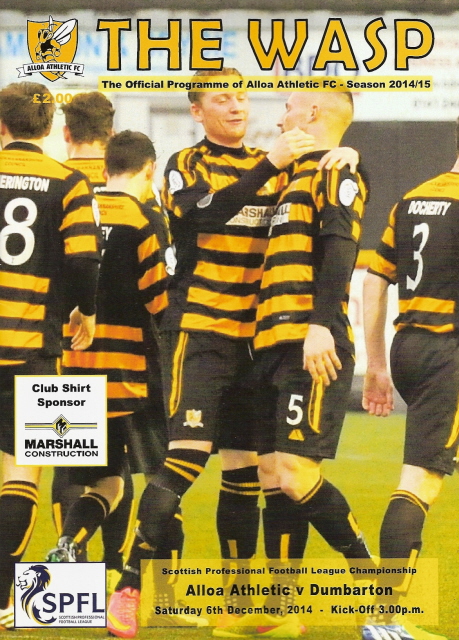 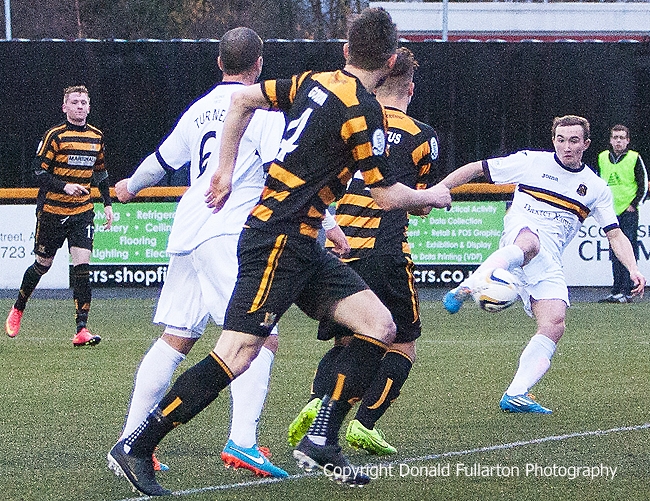 Dumbarton secured a crucial win away against Alloa Athletic this afternoon – but for supporters it was ecstasy within the first ten minutes and quite a bit of anxiety for the remaining 80 minutes, as Sons held on to their lead but could not extend it.

It was an organized and determined display by the visitors, with flashes of inspiration and enough luck to sustain the victory.

Before the match began both sides took part in a mixed photograph for 'Football Remembers', a national event marking the fabled Christmas Truce in the First World War, when soldiers took part in a football by the trenches.

The opening exchanges were fairly even, with both teams looking like they were after three points.

It was the Wasps who nearly went ahead on three minutes, when Sons' Chris Turner was outstripped by Stephen Simmons, who hit the left post with a right-footed shot from outside the box. The ball skimmed across the goalmouth and just out.

Free kicks taken by Scott Agnew and Chris Kane at the other end failed to deliver for Dumbarton. Then Kane produced a piece of football magic.

A cross from Mitch Megginson was headed across goal by Andy Graham. Kane then unleashed a fierce shot from the left side of the six-yard box into the bottom right corner of the Alloa net. 1-0 to Sons.

The game suddenly took on extra life. Megginson did well to anticipate a Kieran MacDonald overlap. The resulting shot was dangerous, but Wasps 'keeper McDowall pulled off a good save to his left.

A powerful David van Zanten strike from the edge of the area was then held by the home 'keeper before Alloa had a penalty appeal waved away by referee Craig Thomson.

Chris Kane had the ball in the net again as Dumbarton piled on the pressure, but was ruled offside as he broke through.

Alloa pushed back. Edward Ferns' right-footed shot from a difficult angle on the left was close, but went wide.

The Wasps then forced three corners in quick succession near the half hour. Dumbarton defended well.

In the first switch of the afternoon, Jordan Kirkpatrick replaced an injured Chris Turner for Sons on 36 minutes.

Docherty, Ferns and Simmons all came perilously close for Alloa before the break, but Dumbarton went off still ahead at half time.

The Wasps came out fighting again in the second half. On 49 minutes Rogers saved the first of two efforts from Spence after an uncharacteristic slip by Sons' Graham.

Chris Kane beat Gordon in the air. However, his header went just wide of the top corner of the net.

Not long after the on-loan striker grazed the post with another determined strike, after doing extremely well to manipulate himself into position and shake off defenders.

Jordan Kirkpatrick hit a speculative effort well over the crossbar before Alloa started to wrestle back possession and press for an equalizer.

Dumbarton still had chances to extend their lead, nonetheless. It took a good save from the Alloa 'keeper to push away a powerful effort from Kirkpatrick.

Then Kane struck over the bar.

On 76 minutes Colin Nish came on in place of Garry Fleming, and was soon in the action.

He did well to assist Scott Agnew, whose left footed shot from outside the box was saved by McDowall in the bottom right corner of the goal.

Again Kane threatened. First with a decent strike saved on the left on 81 minutes. Then four minutes later he broke through and looked certain to make it two for Sons, only to pull the ball slightly wide of the right post.

As the minutes ticked away, Dumbarton gaffer Ian Murray made his final substitution of the afternoon one minute into time-added-on, as Archie Campbell replaced Kane to tumultuous applause from the sizeable away support.

Pretty much the last action of the afternoon came when Nish picked up a booking following a foul shortly before the referee drew proceedings to an end.

On a cold, damp afternoon Dumbarton raised the spirits of their fans with an important if narrow win, rising four points clear of their beaten rivals in seventh place in the SPFL Championship table.