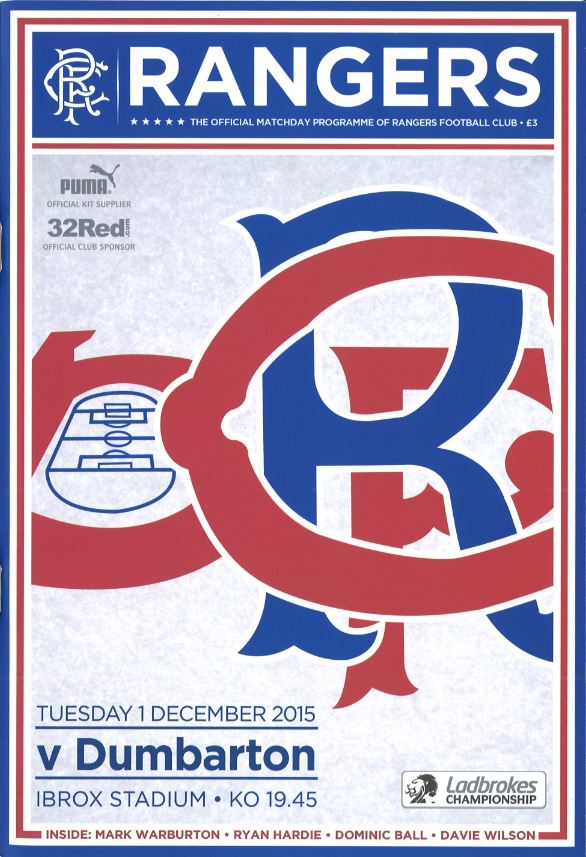 THE second half started with part of the Ibrox roof threatening to come crashing down.

But all that collapsed were Dumbarton's hopes in a game where an admirable first half effort came to nothing.

Half time arrived with everything going to plan. Rangers were being held, on their own well-known intimidating territory. Not only that, they had been restricted to just a few chances to score.

Goals by Jason Holt, Martyn Waghorn and Nathan Oduwa, along with Andy Halliday's penalty, inflicted a defeat which kept Sons ninth in the Championship.

Stephen Saunders was also sent off in conceding the spot kick – which, together with Scott Taggart's injury, leaves Dumbarton without a natural right back for the next outing in the SPFL Championship at Alloa.

Within four minutes Sons had their first shot at goal. Steven Craig's effort on the turn from the edge of the area didn't tax the home keeper too much, but it did serve some notice.

Five minutes later Rangers gave the first demonstration of why they are top of the table as Gedion Zelalem played a through ball to find Lee Wallace in the box. Only a fine save by Mark Brown to tip it round the post prevented an early opener.

It would be the 29th minute before either side threatened again as Sons held firm despite the hosts enjoying most of the possession.

That was when Holt's bending shot was deflected clear by the head of Saunders. Craig then tried again for Sons with a header at the back post from Kevin Cawley's cross, but his effort was over.

Brown then did brilliantly to save Nicky Clark's header at point blank range, but that was it for the first half.

From Sons' point of view, it was so far, so good. They had a bit extra time to enjoy the level scoreline due to an evacuation of a section of the Sandy Jardine Stand as a piece of roofing had come loose.

But the shifted Rangers fans had barely made themselves comfortable in the Broomloan Stand when their team took the lead.

Having emerged early for the second half following some stern words from gaffer Mark Warburton, the Gers worked the ball into the Dumbarton area.

James Tavernier's cross found the head of Holt and, having scored against Sons for Hearts last season, the midfielder opened the scoring for the Ibrox club.

Now Sons had to get forward if they were to get a result. Unfortunately, by this point, fatigue was beginning to set in.

And while Waghorn's shot from 55 minutes bent narrowly over, he had better luck four minutes later.

After a Sons free kick was cleared, a passing move by Rangers ended with the striker bending home a shot.

Tavernier was close to making it 3-0 only minutes later but his close range effort crashed back off the bar.

However, just about everybody watching knew the game was up. It was time for Sons to limit the damage and keep an eye on Saturday's key game in Clackmannanshire.

Brown again had to be on form to deny Jordan Thompson after a quickly taken corner found the substitute.

Instead it was another replacement who added to the home side's scoresheet with 10 minutes to go. Oduwa, only on the pitch for four minutes, was left with a simple tap-in after another passing move.

And with six minutes remaining, Saunders clipped Lee Wallace in the area and was shown a straight red card for a professional foul. He had been booked earlier in any case.

Halliday put away the penalty, and having played out the final few minutes, Sons were left to spend the next four days preparing for a crunch visit to the Indodrill Stadium.