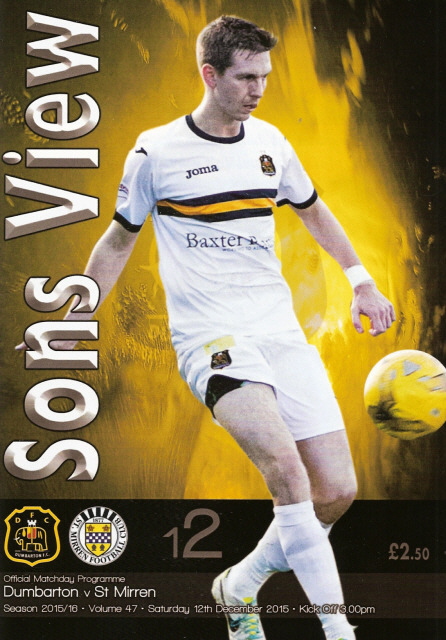 THERE were obvious reasons why this game was going to be in the spotlight.

In the end, boy did it deserve to be. Every one of the 90 minutes was engrossing, ferociously contested and difficult to call.

Not until full time could it confidently be said that Garry Fleming's goal would be the only one of the game. But it was.

With five minutes of the second half gone, the striker turned and fired home a vicious strike for his second goal of the week – both from a Grant Gallagher assist.

Sons weren't just on form upfront. In the space of a week, keeper Mark Brown has kept three clean sheets. This one was the result of some top class saves, and defensive work by the back four.

It was a sobering return to Dumbarton for Ian Murray and Scott Agnew, who this weekend last year were manager and double goalscorer respectively when Sons beat Raith Rovers 2-1.

Twelve months on from that day, Murray left the stadium not only beaten, but having resigned from his post at St Mirren.

However, despite his presence Sons were focused, diligent and battle-hardened enough to put themselves five points clear of the team they beat.

They found the net within five minutes as Sean Kelly headed Kevin Cawley's cross past his own goalkeeper.

But the referee ruled that Gallagher's challenge on the defender was too forceful. On another day the goal might have stood, today it didn't.

Brown's first call into action was to save from Agnew's low shot, but still Sons dominated early on, with Darren Barr's header turned over.

Then on 18 minutes it looked as if the Buddies would get on top as Calum Gallagher found a way through to goal.

However, Brown was alert to the danger and turned the low shot wide. Soon afterwards he kept out Stuart Carswell twice in quick succession as the visitors turned the screw.

It was Dumbarton, though, who finished the half more strongly. Grant Gallagher's 20-yard shot was saved while Fleming was not far from connecting with Mark Docherty's cross.

In the end, it was Gallagher who provided him with the most telling assist of the day.

The midfielder sent over a low ball from the right, just as he did against Alloa on Tuesday. This time Fleming had his back to goal, and a defender at close quarters, but still managed to turn and fire home.

The lead could have lasted just four minutes but Brown then made arguably his most impressive save of the day.

Lawrence Shankland's long distance shot was heading under the crossbar, but the keeper got enough on it to deflect it over.

Fleming was then denied a second goal after breaking through only to have his shot blocked, and the rebound then missed the target.

Chances became harder for either side to create, but it was dramatic viewing alright. No fan of either side was leaving this early.

With eight minutes left St Mirren were awarded a free kick 20 yards out. The sight of Agnew standing over it was a fearsome one for Sons, but his effort went narrowly over.

Soon afterwards Sons found the net again, Donald McCallum putting it there after Jamie Lindsay's shot was parried. However, the offside flag prevented him from celebrating a second goal in as many games.

The minutes ticked away. Then, for the first time since January 2014, Sons could celebrate three consecutive victories.

Whatever happens at Livingston on Saturday, Dumbarton will celebrate Christmas seventh in the Ladbrokes SPFL Championship at the halfway point in the season. And the right combination of results will put them eight points clear of the bottom three.

How merry a Christmas would that be?