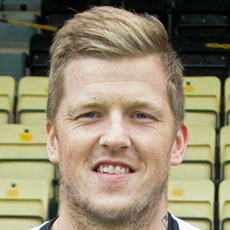 Born in Dumfries, Willie started his senior career with hometown club Queen of the South. Willie joined top flight outfit Kilmarnock from the Palmerston Park side in early 2007. He made his debut, on 3 March 2007, coming on as a late substitute in a 2–0 win over St. Mirren.

He signed for Dunfermline Athletic on 23 June 2009. Making his debut for the club, in the Scottish League Cup, providing an assist for David Graham in a 5–0 win over Dumbarton

On 24 August 2011, Willie returned north of the border to join Perth side St. Johnstone in a loan deal until the end of January 2012. After his loan spell ended, Willie left Crawley Town by mutual consent.

On 31 January 2012 STV reported on their website that Gibson had signed for Falkirk. This was not officially confirmed until 2 February 2012 when the club revealed Gibson had signed until the end of the season. He made his debut against Greenock Morton at Cappielow on 11 February 2012, coming on as a substitute. He scored his first goal against his former club Queens in the 36th minute on 25 February 2012. At the end of the season Gibson's contract was not renewed and he left the club.

On 14 June 2012, Gibson returned to Palmerston Park on a one-year contract. After the move, Allan Johnston commented that Gibson could help Queen of the South gain promotion straight back up to the First Division.

Gibson left Queens by mutual consent in April 2013 after only 12 starts in all competitions.

On 28 August 2014, Willie signed for Scottish League One club Stranraer. He scored on his debut with a free-kick against former club Dunfermline Athletic.

Willie signed for Dumbarton in June 2015, teaming up with his former manager at Stranraer, Stevie Aitken. He scored a free-kick winner on his home, league debut against Hibernian and netted again from a free kick the following week in another 2–1 victory, this time over St Mirren. After six months with Dumbarton, Gibson was released from his contract with the Sons, re-signing for former club Stranraer.