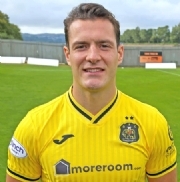 A product of the Aberdeen youth system, Kalvin joined St Mirren and made his senior debut in a Scottish Cup tie against Spartans.

Despite a loan spell with Queen's Park, he was released by the Paisley side and joined Brechin City, where he stayed for two seasons.

In the 2019 close season, Morton handed Kalvin a return to full-time football, and he spent two seasons with them before being released from Cappielow. He then signed for Dumbarton in June 2021.