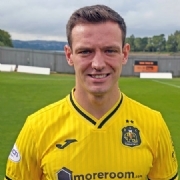 Centre half Edin Lynch signed for the Sons after being released by Alloa Athletic in June 2021.

The highly-rated 20-year-old moved to the Wasps in September 2020 after leaving Kilmarnock, and turned out for them seven times last season.

He has also been in the youth ranks at East Kilbride. Capable of playing anywhere across the defence, he was a player manager Stevie Farrell was keen to bring to Dumbarton.