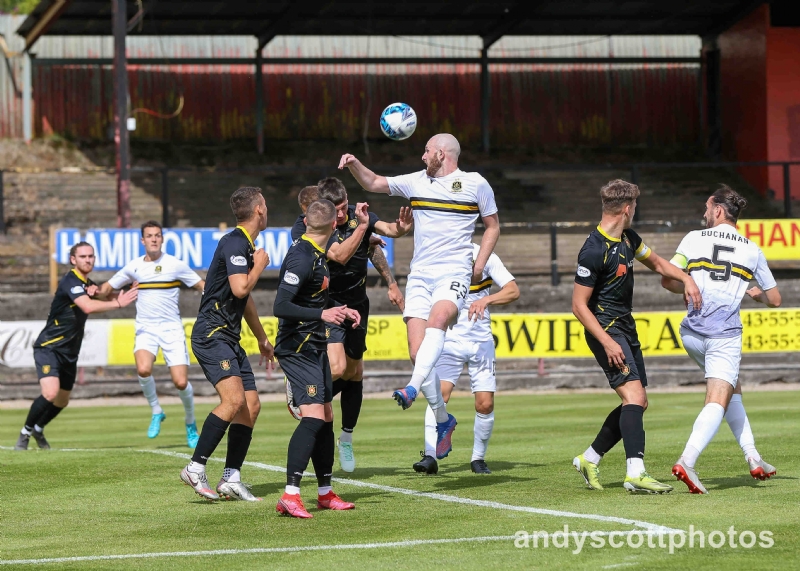 THE warnings had been sounded before the game.

There are not many talking heads across Scottish football who fancy Albion Rovers to make waves in cinch League Two this season.

But many matchdays this season have seen them beaten but not disgraced. Any victory Dumbarton took from them would be as a result of hard work.

And even with an extra man for three quarters of the game, it was hard work alright.

It was also a touch of fortune that they were not more than 1-0 down, Lewis Kidd having opened the scoring, before the game turned in their favour midway through the first half.

Within two minutes at that point, Sons gained the man advantage and equalised through Stuart Carswell's penalty.

It was not until the 88th minute of the game that they finally claimed the points, Ryan Wallace's cross bending in at the far post.

Things did not all go their way, at all, during the afternoon. But history will record that they scored twice and the Wee Rovers scored once.

With a strong wind blowing away from central Coatbridge, Dumbarton were the team defending against it in the first half.

And Albion Rovers did their best to make the best use of it. At this early stage of the campaign, Brett Long seems to be having his own personal save of the season competition, this week's contender being a fine close range stop from Scott Roberts.

Soon afterwards, Jamie Leslie was found in space in the area but his close range effort hit the bar, possibly with the slightest of touches from the Sons keeper.

But a goal was coming for the home side. It just wasn't expected to be from an attacking throw-in for Dumbarton.

Once Rovers had cleared it on 17 minutes they broke forward in numbers and when Charlie Reilly squared across goal for Lewis Kidd, the result was inevitable.

Sons now had to show something and within a few minutes, the game swung in their favour. A poor challenge by Fleming on Finlay Gray resulted in him seeing an early red card.

After Ryan Blair had hit the post with the resulting free kick, Reilly's challenge on Ally Love in the area gave Dumbarton the chance to equalise from the spot.

Stuart Carswell stepped up, and made no mistake.

With the extra man, Sons looked to get into a position of control, and Gray, Love and Joe McKee all went close to establishing a lead.

But Rovers battled on, and although they could not force any further chances, they did not fold either.

The longer the second half went on, the more it felt like the game had used up its share of action.

There was plenty of effort, but few clear chances in front of either goal as frustration began to show on Dumbarton despite the numerical advantage.

Late half chances fell the way of Callum Wilson, whose narrow angled shot was saved, and Gregor Buchanan, whose header dropped wide of the target.

But with two minutes left, Wallace sent a ball into the box. It may have grazed a hair on Love's head, but it was Sons' number 32 claiming the goal as it drifted into the net at the keeper's far post.

Frustrating though it was at times, job done.


Notice: Trying to access array offset on value of type null in /home/customer/www/sonsarchive.co.uk/public_html/matchdetails.php on line 3362