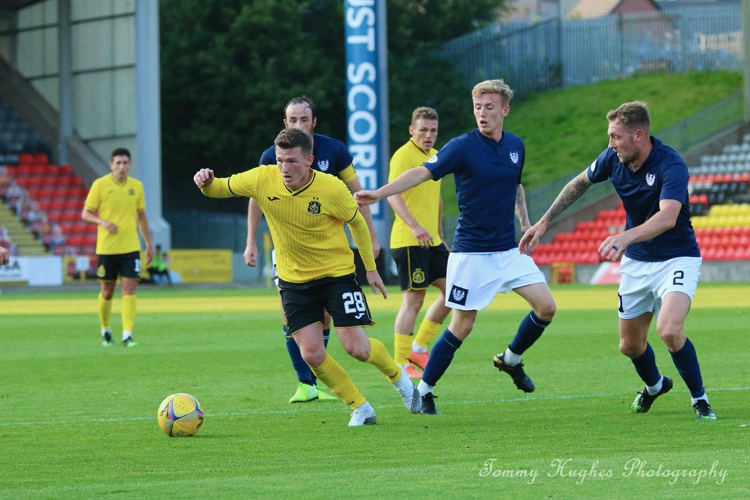 TWO defeats in three days, with seven goals conceded and only one scored, will always be a record Dumbarton would rather avoid.

But there are times when it is all about restoring dignity after a tough first game of that double header. Against Partick Thistle, Sons certainly did that.

This was always going to be a test of their response to Saturday's hefty defeat at Dunfermline. In the cold light of day - about the only way the word 'cold' could be used - history records that Partick scored two while they scored none.

But Dumbarton were brave, busy and battle-hardened, despite their interest in the Premier Sports Cup being over before a ball was kicked.

A goalless half time score was the least they deserved after a first half where they more than held their own and could even have gone in front.

However, they were denied that by Brian Graham's opening goal with the last meaningful touch of the half.

And when the same player made it 2-0 eight minutes after the restart, it truthfully was about damage limitation. Sons fought on, and rode their luck at times, but saw their Championship opponents off for the rest of the night.

With 11 days until the next game, away to Clyde in the opening fixture, it is about continuing to improve, healing any new wounds, and being ready for the trip to Broadwood.

It took only a minute for the first warning shot to be fired. This was a goal on Saturday, but this time Sam Ramsbottom saved Kyle Turner's driven effort well.

But Sons settled almost immediately after that, with further assaults on Ramsbottom's goal kept to a minimum by a determined defence.

Half chances followed at the other end approaching the midway point of the first half. Ryan McGeever headed over from a corner taken by Joe McKee, who then tried himself from distance but fired wide.

Then, just after the half hour mark a corner broke to Gregor Buchanan in the area. His shot was on target, but Ricky Foster cleared off the line.

Another corner then caused trouble, this time for Ramsbottom. Kevin Holt got on the end of Thistle's set piece, but Ramsbottom saved well with Mohamed Niang scooping the rebound over.

But after a questionable amount of injury time, Thistle inflicted a major blow. Ross MacIver had space to work in on the right and crossed for Graham to head home at the back post.

Buoyed by inflicting that blow, the Jags, who made three of four half time changes across the board, started the second half strongly and Zak Rudden fired narrowly wide with an acrobatic effort.

Instead it was left to Graham to post their second goal of the evening when he sidestepped a defender from Connor Murray's assist and scored.

Dumbarton did respond, with the home keeper forced to back pedal to turn a deflected cross by McKee over and the resulting corner yielding nothing.

The yellow jerseys continued to get forward but remained vulnerable to the home side's attack. Only a point blank save by Ramsbottom denied Rudden after a corner broke the striker's way.

Murray also had a shot as the game entered its final stages, but Ramsbottom was equal to it.

There was the chance of a consolation after a free kick was awarded for a passback, but Eoghan Stokes' effort was deflected away for a fruitless corner.

Dumbarton left Maryhill beaten, but a lot more optimism could be afforded than post-Dunfermline. It hasn't been a League Cup campaign for the scrapbook, but let's see what League One brings.