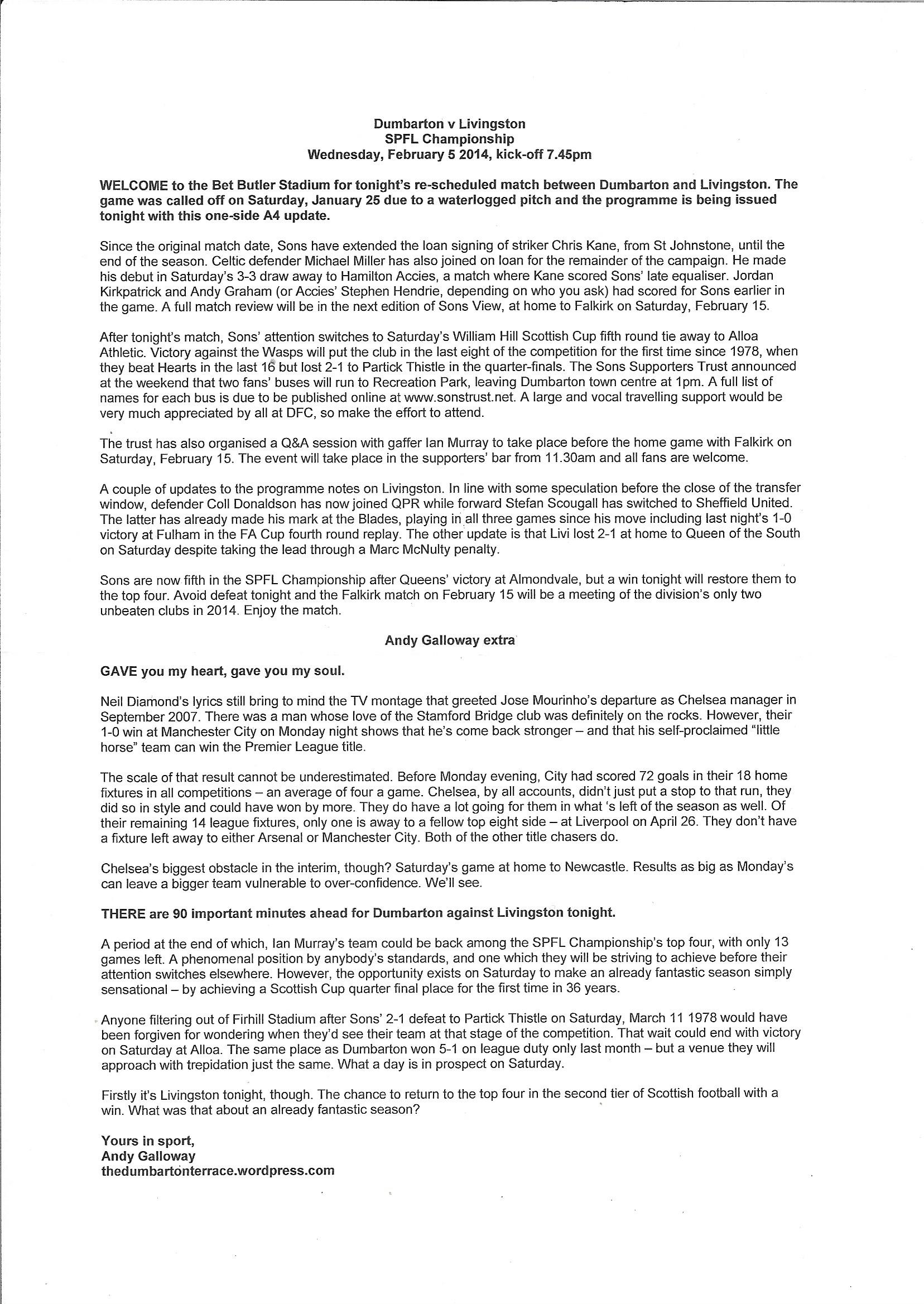 IN an incident packed encounter which will probably qualify as the strangest game this season, ten man Dumbarton grabbed an important home point against Livingston at the Bet Butler Stadium.

The first half was a relatively subdued affair, but after the break it was non-stop drama, including a red card, a third official recruited from the stands when referee Stevie O Reilly had to go off injured, four goals, a stoppage-time equaliser, and yet another courageous fight back from an understrength Sons team.

Though the hope had obviously been for a home win, in the end it was a solid point for Dumbarton which extends their undefeated run to five games at an important stage in the Championship race.

Gaffer Ian Murrays comments afterwards largely focused on the refereeing issue. He said: "I have been saying for weeks and months that they should have a fourth official on the sidelines because it helps managers, it helps the linesmen and it helps the referee... I think the quicker [the authorities] look at this the better."

Both sides took a little time to settle in to a heavy pitch on a damp evening as the game got underway.

There were only glimmers of opportunities for both teams until Dumbarton endured their first blow in the match on just seven minutes. Midfield anchor Chris Turner took an early knock and had to be replaced by Mitch Megginson, requiring a reshuffle to a side already reorganised because of injuries and a suspension.

In the first 20 minutes Livingston slowly started to gain the upper hand, with more time on the ball and some decent-looking forward movement. However, they lacked a decisive break in the final third.

Sons goalkeeper Stephen Grindlay had to make two instinctive, short-range stops as the visitors piled forward. But perhaps the best chance of the opening 45 minutes went to Jordan Kirkpatrick.

Garry Fleming put the ball across the goalmouth. It was missed by everyone and fell to Kirkpatrick at the back post. His strike was firm but spun into the side netting.

A Scott Agnew free kick from 22 yards out raised further hopes for Dumbarton. However, his effort blazed way over the bar and into the fence behind the goal.

Kirkpatrick showed magnificent skill again with a roulette around two Livingston defenders. Unfortunately, however, he ran the ball just a few feet too far and was unable to control it to make a suitably threatening cutback.

There was a huge let-off for Sons when Andy Barrowman burst through at the end of a good move from Livingston, missing the target from inside the six yard box when it looked easier to score.

The visitors had far too much possession as the half drew to a close, with neither side being able to secure a breakthrough.

Not long after the restart things started to go wrong for Dumbarton once more. Garry Fleming, Who had been booked in the first half, picked up a second yellow and was dismissed from the park for a clumsy looking challenge. Sons were down to ten men with almost half of the match remaining.

Livingston continued to dominate possession. Both sides were getting chances, but fewer of them were on target for Dumbarton.

A shot by Scott Agnew from 30 yards dipped agonisingly over the bar.

Then came what for most involved was the main talking point of the game. Referee OReilly suddenly pulled up with what turned out to be a calf injury and had to withdraw from the game.

A tannoy announcement was immediately made in the absence of a fourth official: "if there is a qualified referee in the stand, can you please report to the tunnel."

Following discussions between officials and staff, up stepped Livingston supporter and amateur referee Colin Brown to take the yellow flag on the stand side, allowing the game to continue. He had to endure some friendly banter from Dumbarton supporters, but acquitted himself well in the assistant's role.

When the game resumed, however, things immediately went from bad to worse for Sons.

Livingston broke forward at pace. The ball was swept across the near post to the onrushing Keaghan Jacobs, who cut in, leaving Grindlay with no chance and putting the visitors 1-0 in front.

Dumbarton boss Murray responded with an immediate double substitution on 67 minutes. Off came Scott Agnew and Bryan Prunty, to be replaced by Colin Nish and Mark Gilhaney.

Shortly afterwards sons were, remarkably, level. Nish charged forward onto a loose ball, just getting his outstretched leg to it to lob the keeper with a superb dipping volley from nearly 25 yards. It gave the home supporters plenty to cheer about.

Seven minutes later Livingston were in front again, however. Once more it was Barrowman who had the opportunity to score. This time he did not miss. A cross from the right came to him at close range, enabling him to make it 2-1 for the visitors.

The prospects of getting anything out of the game were not looking good for Dumbarton. On the other hand, ten minutes from the end of normal time, there was still nearly 15 minutes worth of time-added-on to come.

In fact, Mitch Megginson nearly levelled for Dumbarton when he fired the ball across the goal, only to see it narrowly knocked out for a corner.

Despite being behind, tired, and down to 10 men, Sons continued to pile on the pressure.

A Paul McGinn cross was headed over the bar by Livingston's Simon Mensing, with Chris Kane lurking dangerously near the far post.

At the other end, Stephan Grindlay blocked another right-footed effort from Barrowman in the centre of the box.

Then five minutes into added time Kane struck again for Dumbarton, just as it looked as if hope of a point had drained away.

Colin Nish flicked on an incoming ball on, enabling Kane to unleash a well-timed strike under the body of Livingston keeper Kevin Walker. It was another excellent finish to equalise at 2-2.

In the remaining minutes Dumbarton did a good job of closing the game down and securing a vital point.

Mark Gilhaney almost created an opportunity for a winner before the final whistle when he won the ball in the final third and swung it into the area. However there were no Sons players in a position to take advantage.

The draw means that Dumbarton are now on level points with fourth-placed Queen of the South, while Livingston move above Alloa into seventh position in the SPFL Championship.

The Sonstrust Man of the Match award deservedly went to stalwart defender and captain Andy Graham.