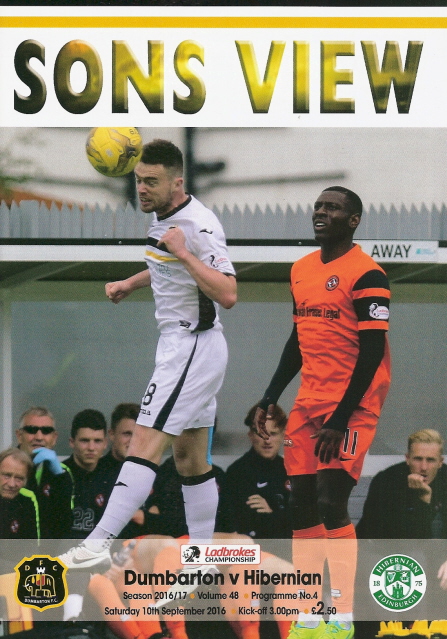 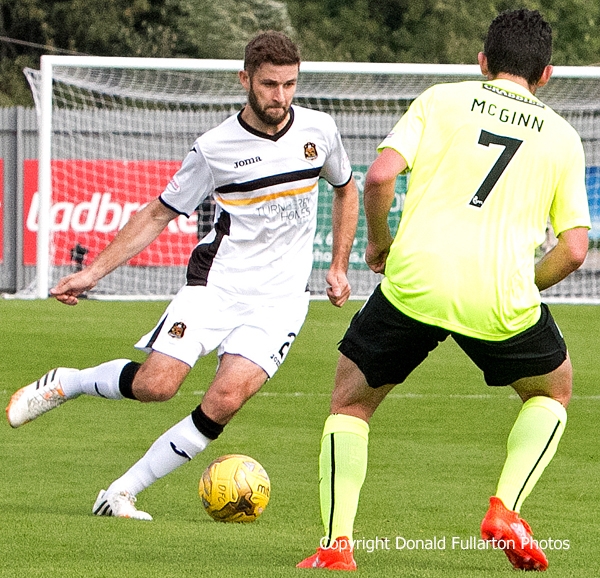 A first half penalty was the difference between the two teams at the Cheaper Insurance Stadium , as Dumbarton fought bravely against Ladbrokes SPFL Championship favourites Hibernian.

Sons' gaffer Stevie Aitken said that the players were disappointed not to have got something from the game, but he expressed satisfaction at the hard work and determination his part timers against top quality opposition.

“We competed well, and our season will be defined by games against the teams around us rather than this,” he told the media after the match.

The game was even for the first half hour, with both sides having chances and Dumbarton's well-organised defence doing well to contain Hibs' talented front line.

Grant Holt and Jason Cummings, in particular, made a series of darting runs to try to find a way past Sons' back line.

The visitors' best early chances were from two free kicks on eight and 16 minutes, the second well stopped by keeper Alan Martin, who had also dummied Holt a few minutes after the start.

Dumbarton's Daniel Harvie was booked for a foul on the quarter hour, though he seemed to have got the ball first with his robust challenge.

The first serious chances came to the counter-attacking Sons on 18 minutes. A corner from Ryan Stevenson was deflected to David Smith. But his shot was also knocked wide.

Greg Buchanan then had a header cleared off the line as Sons looked threatening on the breakaway, despite Hibs maintaining most possession and working the ball well from midfield to front.

On 26 minutes Lewis Stevenson, Hibernian's longest serving player, bundled Dumbarton's Ryan Stevenson, and ex-Hearts stalwart off the ball as he collected the ball on a speedy attack.

Then on 31 minutes referee Greg Aitken changed the course of the game when he gave what Sons boss Aitken later described as a “harsh” spot-kick for a push by Gregor Buchanan on Grant Holt.

Jason Cummings stepped up with a confident conversion past Alan Martin to put the visitors into the lead, feinting slightly before side footing the ball to the keeper's right.

Right after the restart Cummings grabbed the initiative and charged down Martin one-on-one. But his lob went well over the crossbar as Hibs manager Neil Lennon raged at another missed opportunity from the bench.

Dumbarton were reeling from the penalty blow initially, but quickly recovered their composure as Hibs pressed forward in search of further advantage.

Martin pulled off yet another important save to deny Alan Shinnie before half time.

After the break Dumbarton started confidently, pushing forward in search of an equaliser against a Hibs side that was lacking finishing power to match their frequent domination of the ball.

The talented Holt continued to torment Sons' back line throughout the second half, showing the quality that has enabled him to play at the highest level in the English Premier League.

The Edinburgh side made a double substitution on 66 minutes, bringing on McGeough for Bartley and Graham for Cummings.

On 67 minutes Shinnie had a chance to add a second for Hibs, but he drove the ball over the bar.

On 73 minutes Dumbarton made their first change, with Garry Fleming coming on for Ryan Stevenson, who had moved into an attacking role from a switch midfielder for the second 45 minutes.

Neither side looked like adding to the score in a tight second half, but Sons could almost have stolen an equaliser right at the end, when Darren Barr headed just past the near post.

Martin again made a significant save for Sons just after the substitution, this time denying Graham.

With a quarter of an hour left on the clock Dumbarton assistant manager Stephen Farrell was sent to the stands by referee Greg Aitken, apparently for dissent over a free kick.

A double change was made for Sons on 84 minutes, with Smith and Gallagher giving way to Mark Docherty and Donald McCallum

There was frustration for the home side when a Sons penalty claim was turned down as the men from the Rock tried to nip at Hibs' heels towards the end of a hard fought match.

Defender Forster came on for front man Shinnie for Hibs on 88 minutes, showing respect for the continued threat that Sons showed.

Right at the end of full-time Darren Barr almost gave Dumbarton an equalizer when he rose above the Hibs defence from an in-swinger and headed just wide of the post.

In the end Hibs hung on to their lead and to their position as league leaders, while Dumbarton slip to sixth place on four points from five games after a brave showing.

The Sonstrust Man of the Match was named as Craig Pettigrew.

Also of note this afternoon was Garry Fleming's appearance being his 150th outing in a Sons shirt.