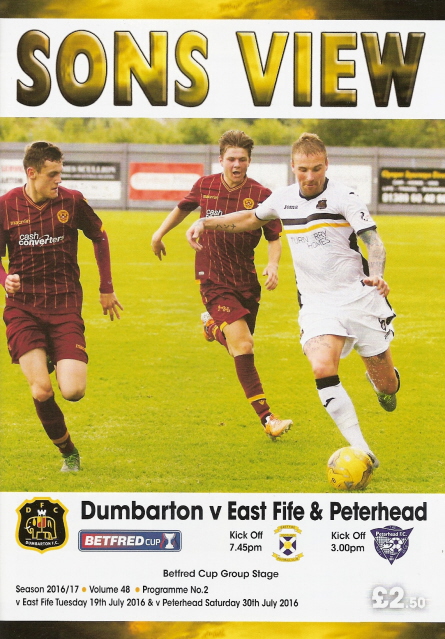 NOBODY expected it to be easy. But this was hard to envisage.

This was Dumbarton's second consecutive Betfred Cup tie as favourites. In their first, they came away with a point.

But first half goals for East Fife by Kevin Smith and Paul McManus condemned them to a defeat in their first competitive home outing.

And with squad numbers already stretched, Grant Gallagher was dismissed 10 minutes into the second half for violent conduct.

Sons were lacklustre from the early stages of the game to the dying embers, and by manager Stevie Aitken's own admission, "not good enough" to warrant any sort of result.

They were run ragged by a busy and creative East Fife side, newly promoted to League One as champions of the lower division.

The game did make a fairly even start, with Mark Brown punching a diagonal ball clear for a corner before McManus could reach it.

In response, Sons threatened with long distance shots from Andy Stirling and Craig Pettigrew, both of which went over.

But in 18 minutes, Scott Mercer sent over a cross from the right which Smith, a Sons player for the later half of 2013, headed home from six yards.

Not a fatal blow for the home side by any means - there were still 72 minutes left. However, the longer those went on, the more the Fifers looked likely to extend their lead.

Kyle Wilkie was set up in a promising position on the edge of the area only for his shot to go straight at Brown, but on 38 minutes the deficit was doubled.

Had Mark Lamont made clean contact with an attempted volley a minute from half time, the scoreline could have made even worse reading. As it was, Brown saved.

The hope was that a response was coming from Sons after regrouping at the interval, but another blow came on 55 minutes.

Gallagher swung a boot at Smith in frustration and was shown a straight red card, making the task of getting back into the game even harder.

In quick succession, Lamont and McManus had further chances, but neither was able to extend the Fifers' lead.

The introduction of Donald McCallum as a substitute offered more attacking threat, and on 74 minutes he did well to create an opening for himself.

But after beating two defenders, he could not get his shot away and when Robert Thomson also missed out on the loose ball, the chance was gone.

Josh Todd, making his starting debut, was also unlucky after cutting into the area from the right, but his left foot shot was saved low at the keeper's near post.

There was one final opportunity for Thomson in injury time, but his volley was beaten away by the keeper.

The horse, though, had long bolted. Whatever else Sons had by the end of the evening, they could have no doubt that better has to be produced in the games to come.