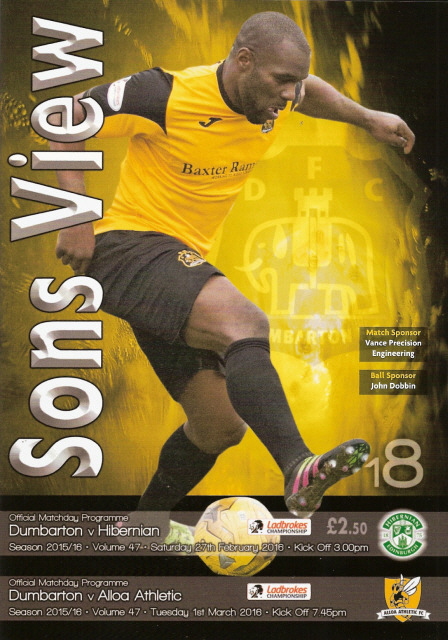 IT was always going to be a night for graft rather than craft. Brains ahead of brawn.

But Christian Nade produced all four of those.

Dumbarton's victory over Alloa was very much a team effort. With a win vital against a team in the last chance saloon, all 11 men needed to knuckle down.

They did that, but the night belonged to Frenchman Nade, who after four Championship games for the club is already their joint top league goalscorer.

That joint title was ensured by a stunning hat-trick, secured within 38 minutes despite Mitch Megginson equalising for the Wasps.

And even though Jon Routledge was sent off on 64 minutes, Sons held on through a great deal of hard work.

There are still plenty exertions ahead before the job of securing Championship survival is complete, but Dumbarton are in as good a position as they could have hoped to be at the start of play.

If they beat Falkirk on Saturday they will be seven points clear of Livingston having played as many games. If they better St Mirren's result at home to Queen of the South they will overtake the Paisley side.

However, on the night, they showed a clinical response to Saturday's disappointment at Almondvale.

They made the most positive start after 10 minutes. Jamie Lindsay's corner lacked pace, but after the Alloa defence miskicked, Nade had a simple finish.

He had the chance of a second four minutes later from another Lindsay assist, but his shot was deflected away.

Megginson was then put through only for his shot to roll narrowly wide, but on 31 minutes he found better luck on his former home ground.

After the Wasps intercepted a slack clearance, Michael Duffy squared for him to tap home and, for the third time in four games, Sons conceded to an ex-player.

But the next time Alloa touched the ball, it was to kick off again after going 2-1 down.

Steven Saunders crossed from the right and Nade's ferocious header looked as though it had hit the post, but crossed the line off the woodwork.

Having created that goal, Saunders was close to scoring a third, but his 20-yard shot went just over.

However, three minutes into the second half it was 3-1, and the crowning glory of a night of sheer joy for Nade.

Routledge's initial shot ricocheted from an Alloa defender, but the striker volleyed home the loose ball in emphatic style.

The Wasps may need a miracle to avoid the drop, but still looked to make a game of it, and Burton O'Brien's lob on 57 minutes beat Jamie Ewings, but not the crossbar.

Then seven minutes later Routledge's wild lunge on Connor McManus earned him a sending off – the only card of any colour on the night.

That led to Sons needing to dig in even more, and they did so to fine effect. Alloa did see more of the ball, but chances were scarce.

Isaac Layne did have one deep into injury time, but headed a cross from the right over.

While one man took all the goalscoring glory, every player in a Sons shirt could feel satisfied at a result which took another step towards a fifth season in the Championship.