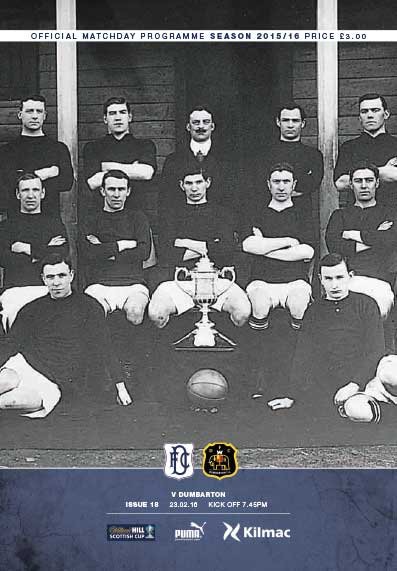 FOR those who like their symmetry, Dumbarton's Road to Hampden could hardly have worked out any better.

It started with a 5-0 scoreline on a cold night. It ended exactly the same way. But not as Sons would have hoped.

They managed to shut out Dundee once, on their own territory. As soon as the Dens Park side took the lead on 17 minutes – with some inevitability, through Paul McGinn – ambitions of another clean sheet ended.

When Kane Hemmings made it 2-0 it was an uphill struggle and, with Greg Stewart's third, the hill was just about at 90 degrees.

Kevin Holt added to the scoreline before a second for Stewart, ensuring that Sons' Scottish Cup campaign ended with the reverse of the result it began with, against Alloa.

In some ways this wasn't a 5-0 game. There was a fair measure of attacking intent from the visitors before the evening kick-off, after a long working day for many players, took its toll.

A second quarter final in three seasons is now just a pipe dream, and attention switches to the fight for league survival.

Sons started looking set to frustrate the Dark Blues again, as the opening stages, while largely played in their half, saw little to test keeper Mark Brown.

Indeed, they had the best chance of the first 15 minutes when Darren Barr's deflected shot finished just wide of the post. Keeper Scott Bain couldn't grasp the resulting corner, but neither could Sons connect with the loose ball.

And on 17 minutes, an overlapping run by McGinn ended with him drilling home at a narrow angle.

Within a minute Scott Taggart, McGinn's immediate successor at right back for Sons, sent a promising ball into the area. Jordan Kirkpatrick met it, but his shot was wide.

Then on 29 minutes Gary Harkins, who had just had an attempted lob saved, sent a low ball into the area.

It looked as if Brown would get to it, but Hemmings had other ideas and stuck the ball away.

Stewart could have widened the gap four minutes later only for Brown to beat away his shot, with Sons scrambling clear.

But he did so eight minutes into the second half, applying a low finish after Dundee stole possession in midfield and played him in.

Stewart, a clear man of the match on the night, then beat two defenders on the edge of the area only to shoot wide, before a swerving effort by Tom Walsh went narrowly past for the visitors.

With 10 minutes left it was 4-0 when Brown could only parry Craig Wighton's shot and Holt snapped up the rebound.

And after Walsh had another shot, this time blocked by a defender at close range, Dundee completed the rout in injury time.