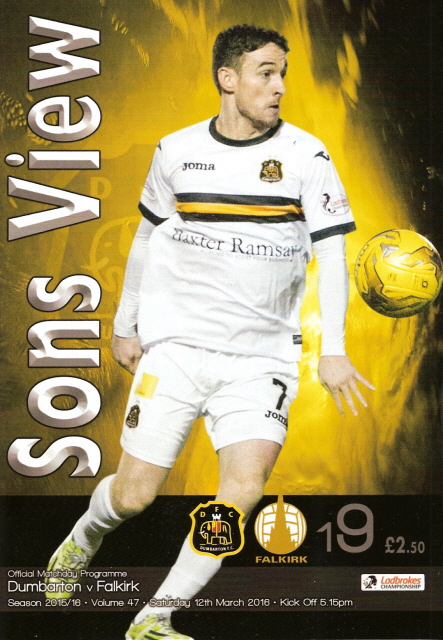 WHOEVER chose this fixture for live coverage on BBC Alba must have known something the rest of us didn't.

Even if it did take until the 65th minute before it became pure box office.

That was when Dumbarton went a goal down, and a man down, after the dismissal of Mark Docherty for a handling offence in the area. John Baird converted the penalty.

Sons had already had a goal disallowed by that point. There was then another.

But they say that breaks even themselves out over a season. To some extent, they were evened up over 90 minutes in one last injury time throw of the dice.

After keeper Danny Rogers went into the back of Christian Nade in the area, Garry Fleming, not for the first time this season, secured a point with a late penalty.

That kick ensured that Sons had the absolute minimum they deserved out of the game. Even with 10 men, the hunger and spirit was never turned off.

The point ensured that the gap to Livingston is now five points, with each team having eight games remaining. There is a lot of football still to play, but Sons are in control of their destiny.

The last time this fixture took place at the Cheaper Insurance Direct Stadium, Falkirk won at a canter. The start they made to this game threatened a similar outcome, but they couldn't finish their moves off.

Alston has scored in all three of the sides' previous meetings this season, but missed from close range this time around.

Sons' first chance of the game, on 21 minutes, brought about the first disallowed goal. After Rogers kept out Jordan Kirkpatrick at close range, the ball broke to Nade.

But although the Frenchman tapped home, he was denied by an offside flag, said to have been raised against him rather than Kirkpatrick.

There wasn't much in the rest of the first half, as Rogers got to a long ball just ahead of Nade while David McCracken headed over for Falkirk.

The second half was also slow to get going, but on 61 minutes Kirkpatrick's corner dropped for Steven Saunders in the area. The defender couldn't quite adjust his body to turn the ball home and Falkirk eventually got it clear.

After the ball struck Docherty's elbow at close range, it was interpreted as a deliberate handball, preventing a goalscoring opportunity. Sons were down to 10 men for the second time in four days, and soon after they were behind as Baird beat Ewings from the spot.

It's at times like this that teams need spirit. Sons had it in spades.

Within five minutes Rogers blocked from Nade at close range. The striker then squared for Kevin Cawley from the loose ball, but his effort was deflected clear.

From the resulting corner, Cawley tried again from much further out, but Rogers was equal to it.

Then with eight minutes left Gregor Buchanan thought he had headed Sons level, only for another offside flag to be raised.

Something had to happen in Sons' favour. And after one added minute, it did.

After Nade connected with a high ball, Rogers clattered into him and the spot was pointed to again.

Nerves of steel were needed on and off the pitch. Anybody who couldn't watch were told by the huge cheers that Fleming had buried the penalty.

The point could still have slipped through Sons' fingers as Myles Hippolyte fired centimetres wide from the edge of the area for Falkirk.

In the end the points were shared and fans at the game, and those watching at home, had much to talk about.