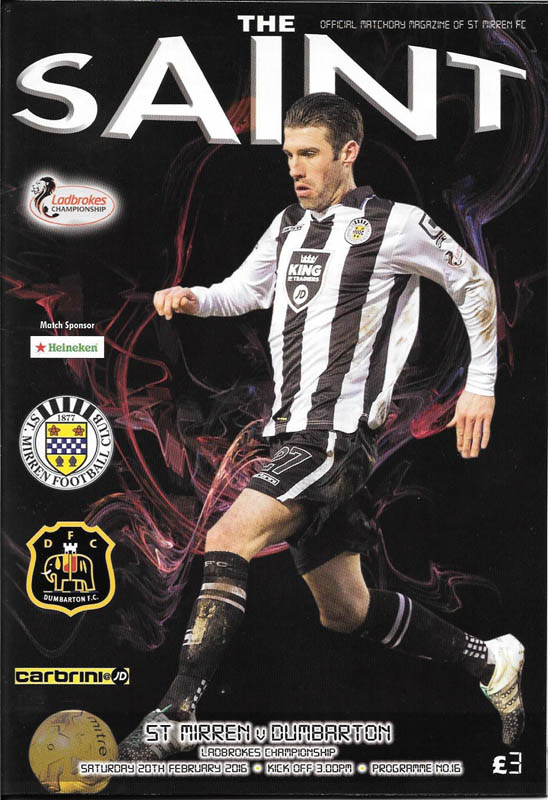 THEY say that the beauty of football is its unpredictability.

If that's the case, who knew that two journeys with Dumbarton across the Erskine Bridge, within a week, would be so similar?

Sons lost to St Mirren as a result of Lawrence Shankland's 63rd minute goal. There was barely anything between the sides, but the visitors all too rarely looked like finding the net themselves.

That second sentence may sound familiar - because it's exactly the same description as last week's 2-0 defeat to Morton. Two evenly-matched outfits, one of whom put chances away, the other didn't.

Dumbarton did go close at Paisley. Frazer Wright had a header cleared off the line while there was the odd other close call.

But it was not enough in an important match.

In a scrappy first half, all the action came between the 17th and 28th minutes, starting when Saints' Kyle McAllister hit the side netting with a narrow angled shot.

Sons' first opening fell to Jordan Kirkpatrick, whose shot from the edge of the area was on target, but saved.

Shankland had a shot blocked at close range by the unknowing Mark Brown, who was restored in goal. From the resulting corner, Scott Agnew put the ball straight into the net at the far post, but a free kick for a foul on the keeper saved Sons.

Then came Wright's effort which came close to breaking the duck.

His header from a corner on the right looked set to make it 1-0, but Rocco Quinn blocked on the line.

That was after 28 minutes, and it was the 62nd before either set of fans had anything to excite them again. Even then, Quinn's shot from the edge of the area was dealt with easily enough by Brown.

But 60 seconds later, after a bad break of the ball, Sons were behind. Shankland was first to find the way the ball spun and, after a couple of strides, slammed the ball out of Brown's reach.

Within another minute Clarkson almost made it 2-0 but blasted over after connecting with a cross.

Brown then kept out Agnew's deflected effort before there were signs of life upfront for Sons. Tom Walsh did well to create space for himself in the area after 74 minutes, but his shot bent wide of the far post.

The game then went into its shell again and St Mirren saw it out.