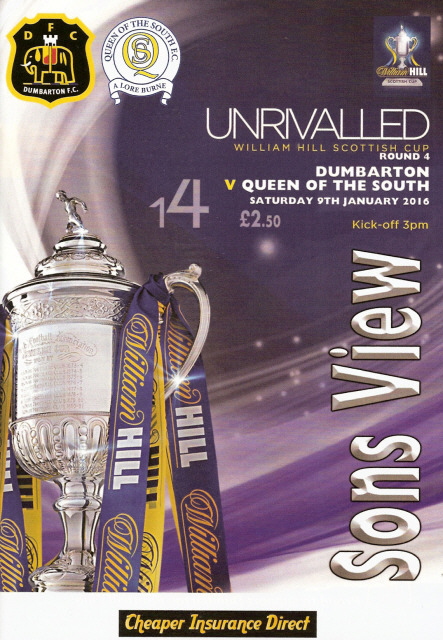 THREE of Scotland's Premiership clubs, including two of the top four, are out.

Aberdeen, St Johnstone and Hamilton Accies will have no Scottish Cup fifth round tie to look forward to on Saturday, February 6.

Courtesy of their first home win over Queen of the South for 24 years, Sons will be one of the final 16 teams left in this season's competition.

Garry Fleming got the goals that saw them through — one each side of Derek Lyle's equaliser for the Dumfries club.

The contest was engrossing and, right up until Mark Brown's crucial injury time save to deny Mark Millar, it was impossible to hand the spoils to either side.

And if you enjoyed it, then good news — the teams will reconvene at the Cheaper Insurance Direct Stadium, this time on league business, next Saturday.

It's a match that both teams will be up for — Queens on the basis of revenge for a fixture where they felt hard done by in the build-up to Fleming's opener. Dumbarton because, after a couple of tough fixtures, the grit required to get results has been rediscovered.

But on 17 minutes Gallagher put Fleming through to open the scoring. With Queens looking for a foul on Iain Russell, the referee paid no attention to the appeals. Neither did the Sons players, with Gallagher sending Fleming clear to drill home an angled finish.

Sons continued on top, with Kevin Cawley heading Calum Waters' cross past, before Queens produced their closest opening of the half.

Gary Oliver got within six yards of goal, but Mark Docherty, however much he knew about it, did enough to deflect the shot wide.

However, within six minutes of starting the second half with the wind advantage, the visitors levelled.

A corner dropped in a threatening position in the area and Lyle finished from close range.

But it only took another six minutes for the lead to be restored. Having done the hard work, Cawley rolled the ball through for Fleming, who stroked it home.

Russell fired wide for Queens only minutes later, while another Waters cross resulted in Gregor Buchanan firing over.

As the game entered its final few minutes, its ending was still uncertain. Even more so when Lyle met Millar's free kick and his effort hit the post.

Substitute Scott Taggart then showed great improvisation to meet Fleming's cross, but his header was turned away.

Then, with three added minutes played, Millar ran through at an angle, similar to Fleming's opening goal.

But Brown was up to it and the first Saturday in February WILL be a day of match action for Sons.