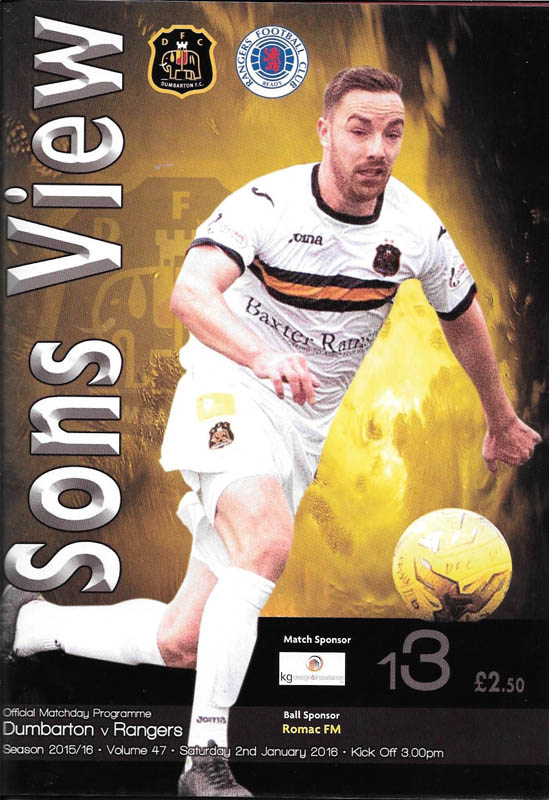 THERE'S really not much you can add to the scoreline.

In the programme ahead of this match, Sons View editor Graeme Robertson wrote that several of Dumbarton's club records had already been broken this season.

Sons' worst-ever defeat at what is now the Cheaper Insurance Direct Stadium was inflicted with this loss.

Kenny Miller's hat-trick for Rangers ended the game as a contest but proved to be only half the story as the Ibrox club added further goals.

Martyn Waghorn, Andy Halliday and James Tavernier were the men who also got on the scoresheet. Keeper Mark Brown made some crucial saves, and the woodwork was assaulted as well.

Although Sons rode their luck at times, the first half progressed well for the most part.

Brown made two saves from Jason Holt while Waghorn found the net, but was denied by an offside flag.

There was a chance for Dumbarton, but after the visiting keeper failed to catch Scott Taggart's cross, Donald McCallum couldn't get enough on his header and the opportunity drifted away.

Another two openings came Waghorn's way, but the first went over while the headed second bounced through to Brown. So far, so good from the point of view of shutting Rangers out.

However, it all unravelled three minutes from the interval when the ball was intercepted and sent in Miller's direction. By whatever means, he forced the ball home at close range.

Sons actually started the second half quite positively, with a couple of chances forced. Jon Routledge got to Kevin Cawley's cross ahead of the goalkeeper only for his header to go the wrong side of the post.

Then, after a Waghorn effort went across goal and past, Darren Barr's clever flicked effort from Grant Gallagher's free kickwas also narrowly wide.

After that, things went downhill at a rate of knots, starting with the enforced departure of Barr following a knock.

Within minutes a Tavernier header hit the bar, with Miller unable to put the rebound away.

However, on the hour mark he had his second after he was left unmarked to power home a header.

And four minutes later the match ball belonged to the former Scotland striker after Sons found themselves in a promising position to go for goal.

They didn't take the opportunity, Rangers broke upfield, and Miller's low finish ended any doubts over the result.

With 20 minutes left, Waghorn made it four after converting another cross from the right.

The fifth goal came on 81 minutes after a Halliday free kick took a huge deflection and wrong-footed Brown to find the net.

If there was one thing left to hope for from this match, it was that a new record defeat at Sons' current home wouldn't be inflicted. But even that was crushed with a minute left when Tavernier thrashed home a 30-yard shot.