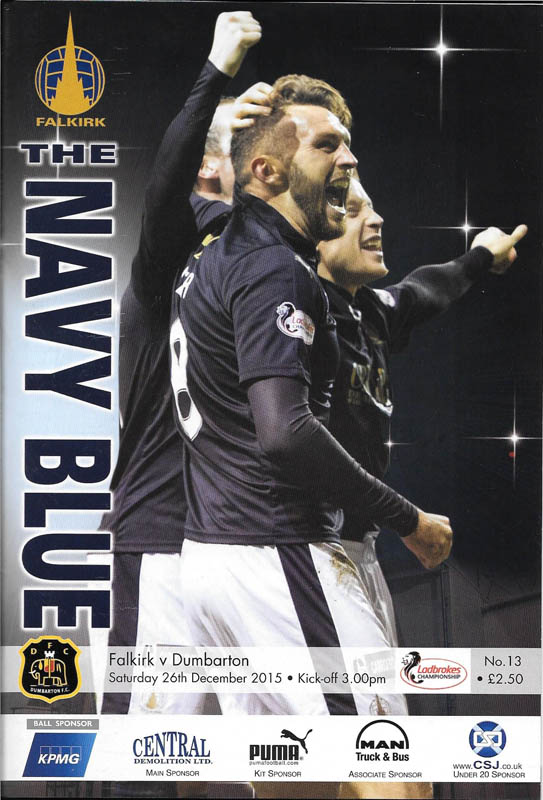 THIS was Dumbarton's third 1-0 league defeat of the season. They've all been away to teams in blue.

At Raith Rovers and Queen of the South, there was some sign of recovery to claim a point, however late in the game.

But in this Boxing Day clash, Sons could have played against Falkirk for the remainder of 2015 and chances are former colleague Danny Rogers could have maintained his clean sheet.

The difference may only have been a single Blair Alston goal for the Bairns eight minutes from half time, but the hosts could have won by more.

Rogers' only save wasn't even really a chance for the visitors. It was a Jamie Lindsay cross, with the game still goalless, which the keeper clutched just before it could dip under the crossbar.

Sons have just taken seven points out of nine from three fixtures which will have a greater say in their season than this one will. And unless Livingston beat Falkirk on Tuesday 29th Dec, Stevie Aitken's team will finish the calendar year in seventh place.

But the attacking threat needed to shock the promotion-chasing clubs wasn't there in this game. And with more such opposition ahead in the coming weeks, they will hope for that to change.

In difficult conditions, the game took time to get going, and after David McCracken headed wide for Falkirk, Sons threatened.

Kevin Cawley's low ball from the goal line almost found Lindsay but a defender got there just in time to clear. The resulting corner saw Lindsay send in the cross that bent towards goal only for Rogers to save.

Then John Baird, scorer of a hat-trick when the sides last met, could have bagged a double in quick succession here.

However, Mark Brown was equal to both efforts, along with a low shot by Will Vaulks, who scored Falkirk's winner against Rangers last week.

Then, eight minutes from half time, Falkirk were awarded a free kick near the corner of the area. With Sons still organising the defence, Alston crashed home a 20-yard shot.

With half time drawing close, the ball fell to Jordan Kirkpatrick 12 yards out, but his volleyed shot was wide.

Within the opening five minutes of the second half, two further telling contributions by Wright prevented Falkirk from extending their lead and surely putting the game to bed.

He again blocked from Baird at close range, while soon afterwards the striker was sent clear only for Wright to challenge as he lined up a shot.

The second half saw both teams struggle for any rhythm. Kirkpatrick did have an opportunity for Sons but his shot from distance missed the target.

With time running out, Brown again kept Baird out, this time with a fine close range save, before also denying Peter Grant from the loose ball.

By now it was apparent it wasn't going to happen for Baird.

But even in 'Chris Kane time', established at the Falkirk Stadium last season, it didn't happen for Dumbarton either.