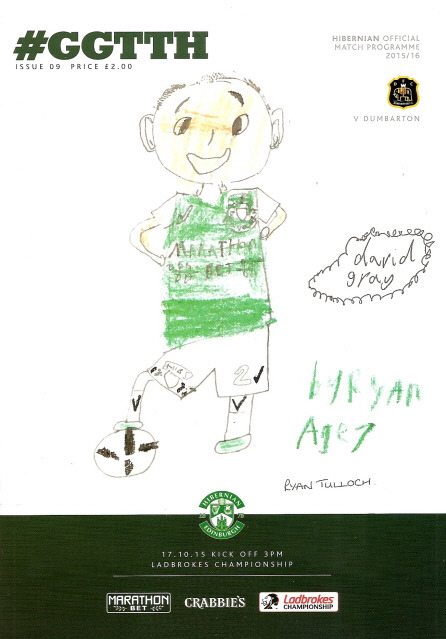 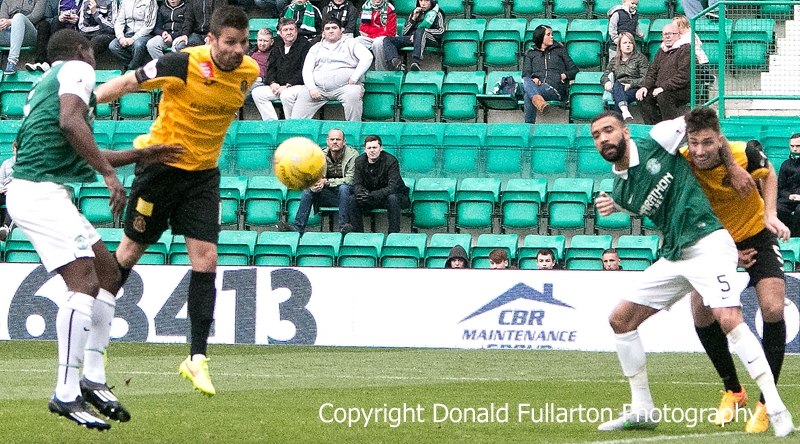 Hibernian's revenge on the Dumbarton side who beat them on day one of the Ladbrokes SPFL Championship season. In the end, the Edinburgh side got it, and over the piece they deserved to. But once again Sons proved how capable they are of mixing it with the leading sides in the league with a battling performance that merited more than a 4-2 defeat. Any notion of Dominique Malonga's opening goal being the start of a procession for Hibs was ended within a minute as Grant Gallagher equalised for Sons. The home side did pull clear before half time with Liam Fontaine's headed goal and Jason Cummings' penalty. Neither was free of controversy. James Keatings made it 4-1, but the gap was harsh on the efforts of a determined Sons side. It was reduced by Steven Craig's header, his first goal for the club, with 17 minutes remaining. Dumbarton are the only side to score past Hibs more than once in an ordinary league match since March. They've now done it twice. In the end, their efforts brought them no reward. However, they once again came away from a match against a promotion-chasing side with credit for how they acquitted themselves.

Within two minutes they'd established themselves. A neat passing move ended with Jordan Kirkpatrick controlling the ball on the edge of the area only to shoot just over. It took 20 minutes for Hibs to force a serious opening – unfortunately they made the most of it. A passing move ended with Malonga crashing home a ferocious shot from the corner of the area. Some may have thought it would send Dumbarton into their shell for the rest of the afternoon. Within a minute they were proven wrong. Kirkpatrick's ball into the area caused trouble for a Hibs defender, whose attempted clearance was snapped up by Gallagher from 12 yards. But it was only five minutes before the hosts restored their lead. A soft free kick inside the Sons half was crossed into the area and Fontaine jumped to head home. Hibs were on top after that, and following Liam Henderson's shot which went over from a good position, they were denied by a fine piece of defending. With keeper Mark Brown well out of his goal, Cummings' cross was deflected towards goal only for Stephen Saunders to acrobatically clear off the line. However, three minutes after that Cummings made it 3-1, scoring the penalty himself after he was adjudged to have been fouled by Frazer Wright.

There was more domination from Hibs in the second half, with Henderson and Malonga missing the target in quick succession. Keatings, on the other hand, didn't. Another passing move by the home side on 59 minutes ended with him applying a low angled finish and to all intents and purposes, that was game over. Despite being under pressure for long spells, Sons weren't out of it, and registered a deserved second consolation through two substitutes who had not long entered the action. Mark Docherty's free kick found the head of Craig and, within three minutes of coming on, the striker had his team back in some sort of contention. He then headed the ball down for fellow sub Steven Ross, whose finish was wide. Had that gone in, the final 15 minutes would have been interesting. As it was, Hibs were closer to making it five than Sons were to notching a third in the closing stages, as only the legs of Brown denied Malonga his second. It just wasn't to be for Dumbarton in this game, but it wasn't one which will define their fortunes at the end of the season. Two such fixtures are coming up in a home double header, and Sons will hope that elements of this performance came back along the M8 with them.