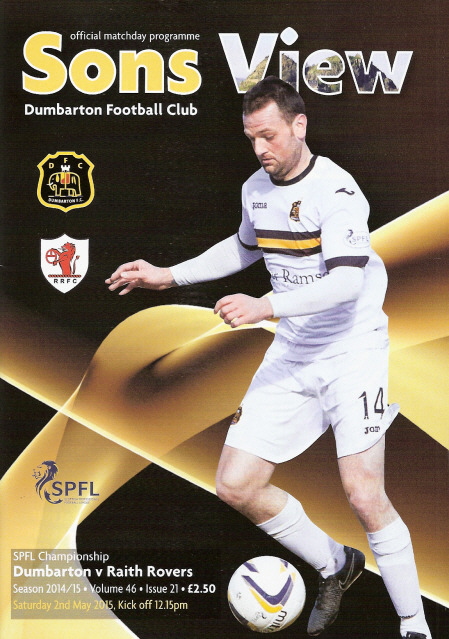 DUMBARTON and Raith Rovers shared four goals in an entertaining end of season encounter at the Dumbarton Football Stadium.

The Sons lineup showed three changes from the side which lost narrowly to Queen of the South in Dumfries the previous week.

Skipper Andy Graham returned from suspension at the expense of Mark Wilson, whilst Mitch Megginson and Darren Petrie were replaced by Mark Gilhaney and fit-again top goal scorer Garry Fleming.

The opening minutes were a subdued affair. Scott Linton's long throw was nodded down by Andy Graham to Archie Campbell but his cross from inside the area was blocked before it reached Jordan Kirkpatrick.

At the other end Jason Thomson's cross found Mark Stewart in space inside the area but his tame effort barely troubled Danny Rogers.

A neat exchange between Mark Gilhaney and Scott Taggart almost freed the former Morton fullback but Paul Watson intercepted before Taggart could get his shot away.

Sons took the lead with the first serious chance of the game. Garry Fleming picked up possession on the right wing, the big striker cut inside and fired a wonderful low effort that flew beyond McGurn in Rovers goal but cannoned back off the post.

As the visiting defenders stood still Jordan Kirkpatrick reacted quickest to fire the ball home from inside the six yard box for his first goal since September.

The low key opening was quickly forgotten as the game began to crackle into life.

Straight from kick off Raith's Lewis Vaughan and Andy Graham came together inside the area, the Rovers attacker was incensed as he felt he had been fouled but referee Mat Northcroft was unmoved.

Mark Stewart then threatened again for the visitors and opened up space with a clever turn in the penalty area, but on loan Celtic centre back Stuart Findlay was on hand to clear before Stewart could get his shot away at the expense of a corner.

Findlay was involved again at the other end as David McGurn punched a Scott Agnew free-kick away that looked destined for the head of the young defender.

Raith were looking the more threatening side however, and from Ryan Conroy's delivery Ross Callachan blasted an effort towards goal which was bravely headed over by Chris Turner.

Danny Rogers then had to be alert as he found himself one on one with Vaughan inside the area. The on loan Aberdeen youngster pulled off a wonderful save with his legs before Scott Linton cleared the rebound from the line.

As the half drew to a close Raith continued to press, and they thought they had equalised after 40 minutes. A long range effort from Callachan was saved awkwardly by Rogers and Vaughan tucked home the rebound.

His celebrations were cut short by the flag of the stand side assistant, much to the relief of the home support.

In the final action of the first 45 minutes, goalscorer Kirkpatrick showed great pace and strength to halt the dangerous Vaughan as he darted towards the penalty area.

The second half began with Sons shooting into a strong wind, and the visitors were continuing to trouble the home defence. Ryan Conroy saw his speculative 35 yard effort whistle just over Rogers bar whilst Vaughan was again halted by Rogers.

It came as no surprise when the Fifers equalised eight minutes after the interval. A wonderful ball from the impressive Vaughan put Mark Stewart clean through on goal, and the experienced frontman made no mistake with a low hard right footed finish beyond Rogers.

A strong run by Garry Fleming was halted unceremoniously by Craig Barr, who picked up a booking for the offence. From the resulting free kick Stuart Findlay could not direct his header goalwards.

A moment of magic from Vaughan then gave the visitors the lead. Danny Rogers weak kick out was taken down by the lively 19-year-old who took a touch and fired dipping effort beyond Rogers from all of 40 yards. The goal was impressive enough to produce applause from the home end.

After a good first half performance the visitors had taken control, and Sons faced an uphill battle into the wind in order to gain anything from the game.

Grant Anderson fouled Mark Gilhaney on the edge of the area, but nobody could get a touch on Agnew's excellent, pacey delivery.

Archie Campbell then dug out an excellent cross from the left, but again there were no takers in white shirts.

Chris Turner was replaced by Mitch Megginson in the 69th minute after seemingly picking up a knock. This saw a switch in positions with Kirkpatrick slotting into central midfield and Megginson taking his place on the wing.

A powerful Garry Fleming run looked to have been ended illegally but referee, Northcroft disagreed and Raith broke with pace. Mark Stewart produced an inch perfect cross for Vaughan but his header from less than five yards somehow dropped just wide.

Last week's goalscorer Donald McCallum was brought on at the expense of Kirkpatrick as Sons continued the search for the equaliser.

They would not have to wait long. Impressive youth team graduate McCallum brilliantly outmuscled Barr and headed for the penalty area. His clipped delivery towards the back post was headed back by Rovers defender Rory McKeown and Scott Agnew was on hand to rifle a fine right-footed volley beyond McGurn from inside the penalty area.

It was nothing more than the home side deserved having being the dominant side since going behind. It also meant that four of Agnew's five goals this season had came against the Starks Park club.

Industrious work by Archie Campbell won a corner for the home side, however Stuart Findlay's header from Man of the Match Agnew's delivery lacked power.

McCallum had a strong shout for a penalty as he was taken down off the ball with Campbell breaking free down the right, but Northcroft waved away the appeals.

The hard working Mark Gilhaney was replaced by another youngster, Ryan Clark, in the dying as the game drew to a close.

Clark had an immediate impact as his surging run was brought to an end by a cynical Martin Scott challenge which earned the experienced Raith midfielder a yellow card. But nothing came from the resulting free kick.

Raith almost nicked the three points at the end as the impressive Callachan's effort from range somehow dipped just wide.

The final whistle was greeted with applause from the crowd, who showed their appreciation for the squad's efforts over the season, as well as an entertaining performance in the end of season encounter.

The next action at the Dumbarton Football Stadium takes place next Sunday (10th May) when Stephen Grindlay's testimonial match takes place with a 2pm kick off.