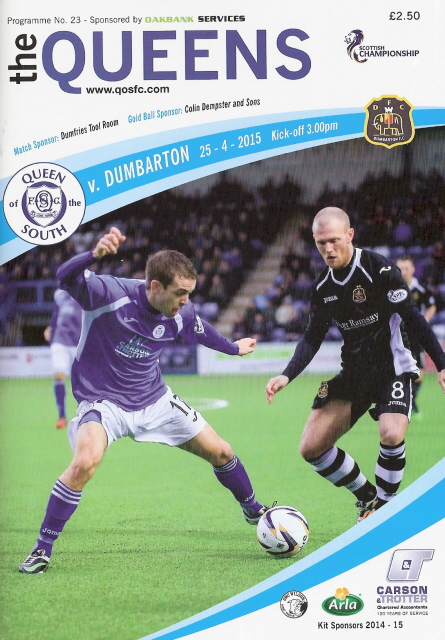 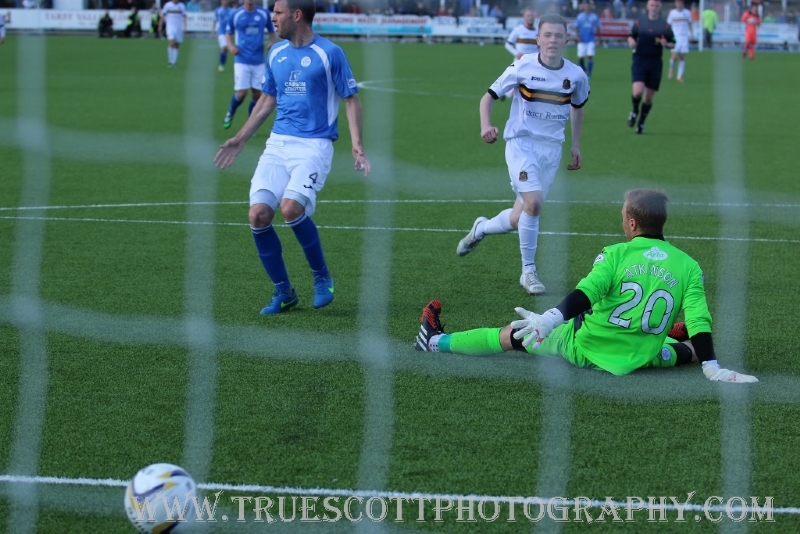 DUMBARTON went down to another defeated by Queen of the South in their final away fixture of the season at Palmerston.

Sons put in a reasonable display on a sunny day, especially towards the end of the game. However, it was not enough to get anything from the match.

Gaffer Ian Murray commented afterwards: “Obviously we're disappointed, but I thought we did really well in the last 25 or 30 minutes, so we'll take the positives.

“I thought we might get the equaliser in the last 5 or 10 minutes, but we left it too late.”

There was plenty of effort from both sides in the first half, but few clear chances for either team.

Early on Chris Turner played a fine through-ball for Archie Campbell, who put it across goal for Mitch Megginson. The young Rock man couldn't quite connect.

A tussle between Turner and Queens' ex-Son Iain Russell led to what seemed like a quite harsh booking for the robust Dumbarton central defender.

Russell, who sustained a knock from his fall, was then substituted, with Michael Paton coming on in his stead.

Sons 'keeper Danny Rogers then made a remarkable close range stop from a Derek Lyle header early on.

At the other end, Mitch Megginson came close a couple of times, first from a long Scott Linton throw, then when he had an effort pushed aside by Doonhamers' goalie Jim Atkinson.

Not long before the break, Mark Wilson's cross to Darren Petrie had a little too much power on it, and another half-chance went begging.

Queen of the South had more possession, but were also finding it difficult to make an impact in the final third.

As the second half began Sons went on the attack and Chris Turner volleyed the ball over the bar.

However, it was Queens who got the first breakthrough when a cross from the right was flicked on and turned in by Kevin Holt at the back post to make it 1-0 to the home side on 55 minutes.

The Doonhamers turned up the pressure, determined to make their play-off position safe.

Wilson's back pass to Rogers proved too weak and was picked up by Gavin Reilly in a dangerous position.

Thankfully the Sons goalie got in a fine block, before the rebound was cleared off the line by Linton.

The industrious Stuart Findlay might have pulled one back for Sons. But his header from a central position eight yards out did not flummox the home 'keeper, who made an excellent save look effortless.

Stephen McKenna then made it 2-0 for the Doonhamers on 72 minutes with a great strike across the face of the box that left Rogers with no chance.

In a double substitution for Sons, youngsters Ryan Clark and Donald McCallum came on to replace Megginson and Petrie.

Queen of the South, needing a point to ensure making the promotion play offs, kept the pressure on as the game moved into the final phase.

However it was Dumbarton, bursting into especially life in the last fifteen minutes, who struck next.

Donald McCallum got on to the end of a through-pass from a one-two with Mark Gilhaney and finished calmly and well to make it 2-1 on 80 minutes.

The momentum was now with Dumbarton, whose visiting supporters sensed a late come back in the air.

The ball opened up for Archie Campbell in the penalty area, but he elected to shoot rather than square it and the opportunity was missed.

Next, a cross from Gilhaney took a deflection and hit the side netting.

In time added on McCallum looked for a second goal for himself and Dumbarton, turning and shooting adroitly in the area, only to see the ball go agonisingly wide.

The result does nothing to alter Sons' now fixed seventh place in the SPFL Championship, but means that Queen of the South guarantee a deserved promotion pay-off place after a hard season.