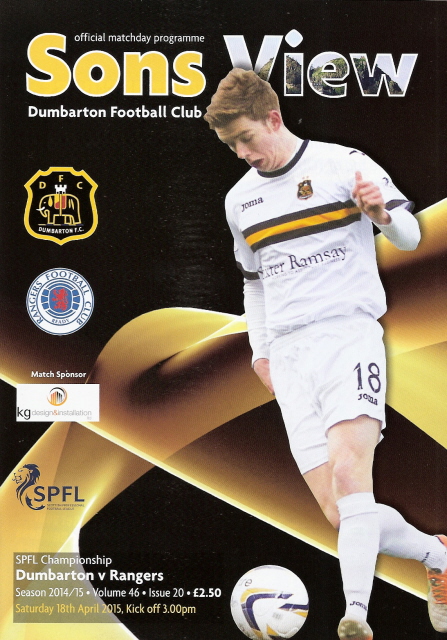 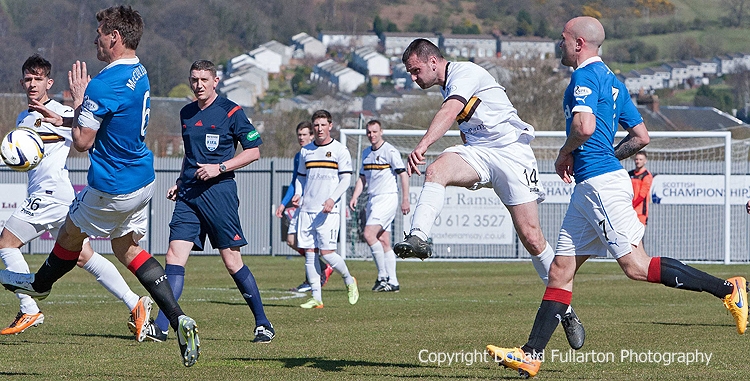 RANGERS completed their full complement of four league wins over Dumbarton, easing to a 3-1 victory on a sunny afternoon at the Rock.

After both sides had probed each other's defences with some initial moves from the middle of the park it proved an ideal start for Sons.

Three minutes into the game Mark Wilson picked up the ball on the near post and gave Rangers 'keeper Cammy Bell no chance as he volleyed high into the net to make it 1-0.

It took a heroic block from Graham to block Andrew Murdoch's shot.

Then Danny Rogers made a brilliant stop to tip over Lee McCulloch's acrobatic effort.

As Rangers pressed back a long-range strike from Nicky Law was comfortably held by Rogers.

A fine through pass from Haris Vuckic was seized upon by Ryan Hardie, who bundled it home for his side's equaliser, despite the noble defensive efforts of Stuart Findlay.

The visitors were buoyed. McGregor's effort was pushed over the bar by Rogers.

A dangerous ball across the area from the same player was narrowly missed by everyone in the Sons penalty area.

At the other end Dylan Easton got past his man with an adroit stepover. However he dragged his shot wide when a pass to Archie Campbell might have provided a better option.

As the match swung back and forth, Scott Agnew's corner was glanced narrowly wide of the post by Nicky Clark.

Two more corners followed for Dumbarton, but with no threat resulting.

Vuckic broke through just before the break, but his low, angled shot was well stopped by Rogers with his legs.

Three minutes into the second half Hardie made it 2-1 to the visitors, throwing al leg in the air to turn in Lee Wallace's cross past the stranded, outstretched Rogers.

Vuckic then produced a stunning third goal, cutting in from the right before cracking a mighty strike into Rogers' top-right corner.

The match subsided significantly after that, with Rangers claiming most of the possession and Dumbarton confined to a few counterattacks.

There was a great chance for Stuart Findlay as he met Easton's free kick, forcing the 'Gers goalie into a good stop.

After further Rangers pressure another big chance fell Dumbarton's way. Campbell grabbed the chance, but drilled the ball over from a tight angle.

On 71 minutes Sons gaffer Ian Murray made his first substitution, bringing on Mitch Megginson for Easton.

On 80 minutes Mark Gilhaney made way for Scott Linton.

A fine challenge by Andy Graham denied Nick Clark a goal scoring opportunity on the edge of Sons' area.

To his astonishment and that of most in the stadium, referee Craig Thomson produced a yellow card for the big central defender, having just put Megginson in the book for a late challenge on Vuckic.

Neither side had any further clear chances, as Rangers comfortably saw out the closing minutes to secure their victory.

The Sonstrust Man of the Match was busy 'keeper Danny Rogers, who had produced incredible saves from McCulloch, Law and Vuckic, among others.

Next up for Sons is a final away trip of the season, to Dumfries, where they face Queen of the South on Saturday 25th April.