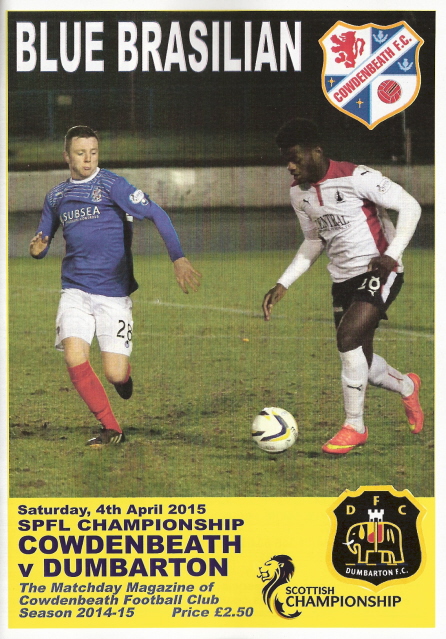 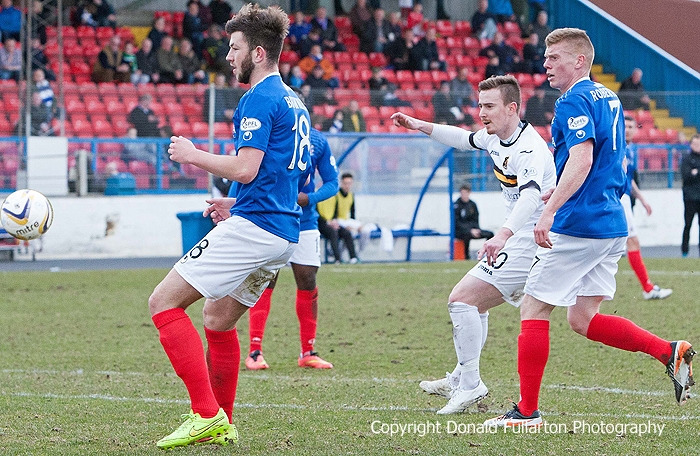 DUMBARTON failed to build on recent positive results this afternoon, slipping to a 3-0 defeat to Cowdenbeath at Central Park.

Goals either side of half time from Lewis Toshney and Sean Higgins, combined with a late Colin Nish header, made it a thoroughly miserable day for Ian Murray's men.

With Stuart Findlay missing because of a virus, and Chris Turner suspended, Dylan Easton and Chris Duggan came into the team, meaning that Garry Fleming dropped back into a more defensive midfield role in a 3-5-2 formation.

Sons kicked off shooting into the goal in front of the vociferous away support and it was they who did the early attacking.

Chris Duggan and Scott Agnew combined well to set up Mitch Megginson, but Cowden keeper Robbie Thompson was out quickly to punch the ball clear.

A minute later the away side had another good opportunity.

Agnew and Dylan Easton worked their way into the Cowden penalty area, with the on loan St Johnstone attacker's chipped cross being turned away by Nat Wedderburn before it could reach Duggan at the expense of a corner.

The home side began to grow into the game more and more after a slow start.

A long throw from Thomas O'Brien found Lewis Toshney on the edge of the box, but his goalbound volley was expertly tipped over the bar by Sons keeper Danny Rogers.

From the resulting corner Darren Brownlie headed just over the bar after being offered too much space in Dumbarton's penalty area.

The home side tested Rogers again soon after. Strong play from Sean Higgins and Wedderburn opened a gap for Kudus Oyenuga but his shot was weak and straight at the Republic of Ireland Under-21 internationalist.

At this stage the pitch was cutting up badly, and this was preventing both sides from playing any attractive football.

Dylan Easton found himself on the end of a slightly overzealous Toshney tackle, but was able to continue after treatment.

From the resulting free kick Scott Agnew could not trouble Robbie Thomson.

Jon Robertson delivered an impressive ball from the right wing, which dropped perfectly for Sean Higgins.

The experienced striker's effort lacked power, however, and trickled into the gloves of Sons no.1 Rogers.

Sons were next to threaten. Mitch Megginson performed an extravagant heel flick which took him past his marker. He played the ball to Archie Campbell, who hit the byline before cutting a ball back which was intercepted by Thomson at the feet of Chris Duggan.

Cowdenbeath's Colin Marshall became the first player in referee Barry Cook's book after a scything foul on Easton on the halfway line, as Sons looked to break.

Duggan tried his luck from range, but his powerful effort whistled just over Thomson's bar.

A minute later the Blue Brazil had the lead.

Slack play in midfield allowed Marshall to pick the ball up and drive forward. The well-travelled midfielder found Oyenuga on the edge of the box who was allowed time and space to have a shot at goal.

Rogers saved, but parried the ball out. Lewis Toshney was quickest to react to give the home side the lead, prodding the ball in from close range.

Dumbarton central defender Andy Graham found himself in the book just before half time — for a shirt tug on the lively Oyenuga in the last action of a frustrating and poor-to-watch first half.

The second half began just as the first had finished, with the home side on top.

Just two minutes after the break Cowden doubled their lead, and the goal was a carbon copy of their opener.

The ever-dangerous Oyenuga was given time and space to have a shot from inside the area, again Rogers parried the effort but unfortunately for him the ball dropped kindly for a blue shirt inside the penalty area — this time it was Sean Higgins — who had the easy task of knocking the ball into the net from close range.

Ian Murray responded by bringing off Chris Duggan and replacing him with Darren Petrie. The move saw Petrie slot into centre midfield and allowed Fleming to push into a more familiar forward role.

The switch almost worked immediately. Fleming battled hard to win the ball back and his ball found Megginson in space. The young striker cut inside but could not keep his effort down.

The lively Oyenuga was then booked for dissent after needlessly throwing the ball away after a Dumbarton throw-in had been awarded on the halfway line.

Sons skipper Graham then gave the dejected visiting fans something to smile about, as he performed an exquisite 'roulette' around ex-Son Colin Nish.

The introduction of long-term injury victim Jordan Kirkpatrick for the tiring Easton was another positive on a disappointing day for the travelling supporters.

Nish and Oyenuga both had good chances to further the home team's lead, with the latter seeing a well-crafted move result in a one-on-one which was smartly saved by the legs of Danny Rogers.

Sean Higgins was booked for clattering into Darren Petrie, while Scott Taggart picked up Sons second booking for an attempted foul on Oyenuga.

The same player had another great opportunity to seal the points as he was played through by O'Brien. However, he rather snatched at the opportunity, which went high and wide of Rogers goal.

Then on 78 minutes the inevitable happened.

Marshall was given time to cross the ball from the right hand side of the pitch. His cross was inch perfect for Colin Nish who nodded home his first goal for his new club against the team he had been playing for — and scored for — the last time the teams met at Central Park.

His diplomatically muted celebration did little to improve the mood in the old stand at the stadium, where the sizeable away following was housed.

It came as a relief when Oyenuga — who had been at the heart of every good Cowdenbeath move — came off to be replaced by on-loan Hearts youngster Robbie Buchanan.

Buchanan looked every bit as creative as the man he had replaced. Only the assistant's flag prevented him from adding a fourth goal with a high finish from inside the penalty area.

The same player then went round Rogers, but took an extra touch which forced him wide. His eventual cross evaded everyone in the box, before trickling out for a throw-in.

The final action of the game once again saw Cowdenbeath threaten. Colin Nish tried an audacious lob over Rogers from the edge of the box but saw it drop wide of the goal.

The final whistle was a relief for the visiting fans, who will hope for a considerably better showing at home on 8th April against playoff hopefuls Hibernian.