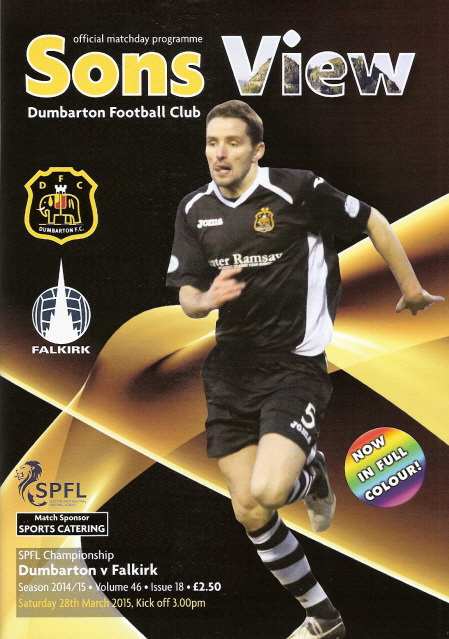 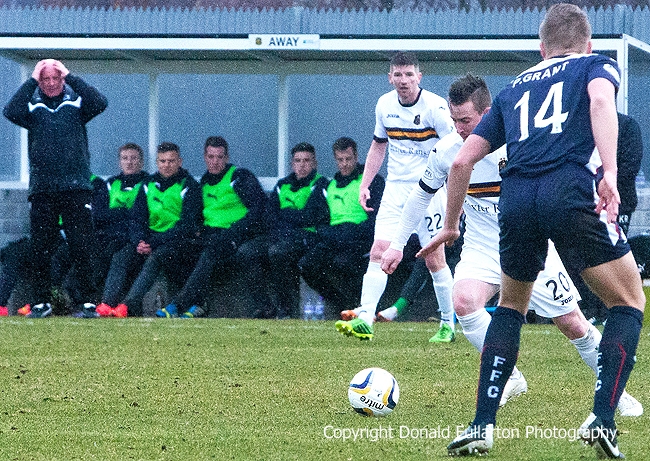 A FANTASTICALLY struck goal from Sons' Archie Campbell was the difference between Dumbarton and Falkirk in a tough, physical clash at the Rock.

The win provides three more vital points on the path to SPFL Championship safety for the Sons, who showed skill, energy and determination to thwart promotion-chasing Falkirk in a busy second half.

There was little in the game before the break, with both sides struggling against a swirling wind on a dark and rainy afternoon.

Falkirk had their chances in the latter stages of the match, but their finishing was poor and the man of the match, Dumbarton keeper Danny Rogers (chosen as the Sonstrust Man of the Match), big central defender Andy Graham and the back line performed well under pressure.

Sons looked threatening on the counter-attack, and Campbell judged his long, sweeping shot into the far corner with great skill ten minutes from the end.

Expressing satisfaction with a job well done afterwards, boss Ian Murray observed: “The guys showed great discipline to handle the game plan we asked of them and also to handle Falkirk and restrict them to minimal chances.”

He added: “We've given ourselves a decent amount of points in the last five games so I think it'll be difficult for us to get dragged into the relegation play-offs.

“There's daylight between ourselves and the rest but it's been hard graft from the guys.”

The first half was mostly conducted as a battle by both teams against the inhospitable elements – with the swirling wind and rain making the ball difficult to control to any purposeful effect.

The Bairns had the slight advantage of wind direction, but Sons still looked a little better overall, enjoying slightly more of possession.

The discontinuity of the match in the first half hour certainly inhibited Falkirk's natural passing game.

There were several chances, nevertheless. Will Vaulks' shot from range was pushed wide by the in-control Danny Rogers in the Dumbarton goal.

Later, John Baird's neat flick-on, which should have opened the scoring, proved off target.

Mark Wilson came close for Dumbarton, following a good lay-off by Mitch Megginson. In the end he struck into the side netting.

At the other end, with the half coming to a close, Rogers did well again to save another long-distance effort from Blair Alston.

Craig Sibbald's shot almost caught Sons' commanding Number One off guard, but the delivery was not controlled and went just wide of the post.

The wind subsided during the break, and early in the second period it became clear that both sides were determined to look for a result.

However, Falkirk were profligate in front of goal, while Dumbarton were again struggling to turn possession into concrete chances.

Heroic defending was required from Sons to keep out the ball during an early goalmouth scramble.

A fine interchange between Mark Gilhaney and Scott Taggart on the right hand side looked like providing a breakthrough for Sons, but the assistant ruled that the ball had gone out.

The match was much livelier now, with the pendulum swinging from end to end.

More quality keeping from Danny Rogers resulted in him pushing a dangerous strike from John Baird over the bar.

A quite brilliant save from the same forward followed shortly afterwards.

Garry Fleming had a chance to threaten the Bairns with a free kick 25 yards out from a central position. However his weak effort barely threatened.

Another shot from Baird deflected off Taggart and was gratefully collected by Rogers.

Then on 81 minutes, just as the match looked as if it was about to taper off into an inevitable nil-nil draw, Dumbarton struck.

Come the moment, striker Archie Campbell stepped up to and rifled a blazing shot into the top corner of the net from 20 yards out.

However, the advantage could easily have been stolen back by Falkirk moments later.

It took a point blank save from Rogers to dent Baird once more. It was not going to be the visitors' afternoon.

Dumbarton looked controlled and determined at the back in the closing minutes, avoiding the peril of getting caught too deep.

In one last desperate attempt, the luckless Baird curled a final shot wide of the far post after beating Taggart.