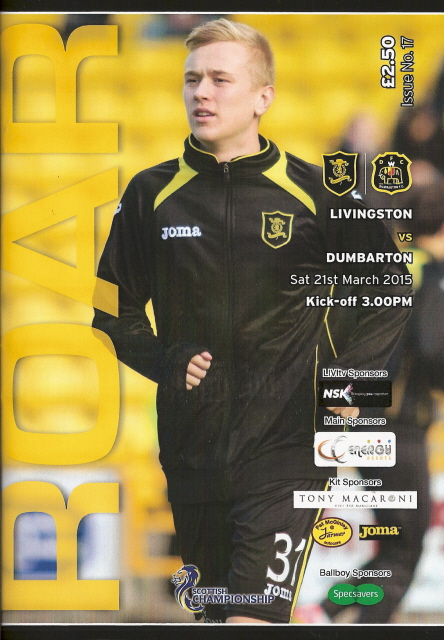 DUMBARTON came back late in the day to claim a crucial, narrow win against foot-of-the-table Livingston at the Energy Assets Arena.

Livi went ahead in a scrappy first half through a free kick glanced on by Sives, leaving Sons on the back foot.

After the break the visitors struggled hard to get back into the game. Their endeavours were rewarded right at the end.

First Scott Agnew twisted in a superb free kick to pull the score back to 1-1. Then, to the delight of the away support, Garry Fleming hammered in a winner right at the end after a corner and a goalmouth scramble.

After a last-gasp victory that will leave Livingston feeling very sore, Sons boss Ian commented: “One thing that we have instilled in the last couple of years is our energy and work rate.

“At times when we are not at our best, like in this match, we hang in games and can nick points.

“The quality of our goals was exceptional. The players deserve credit because we went through a sticky patch not too long ago and people start questioning [them].

“But the guys do what we ask of them and they give us everything they have,” he declared.

Things looked sticky for Dumbarton from the outset, and they never really seemed to get into their stride in the first 45 minutes.

Then only three minutes into the match Ibra Sekaija went through on goal and looked certain to score.

Fortunately for Sons, he skewed his shot wide, averting what would have been a disastrous start.

The visitors woke up a little after this, but were still struggling to string decisive or threatening moves together, and letting Livi push back too easily.

Garry Fleming had a decent chance for Sons when he got on the end of Mark Gilhaney's cross. However his effort was also off target.

Mitch Megginson also shot wide when he might have been better to lay the ball off to Gilhaney.

The punishment for Sons' failings was not long in coming.

On 14 minutes Craig Sives found himself unmarked and in acres of space, heading home Keaghan Jacobs' free kick from outside the area to make it 1-0.

Dumbarton tried to hit back immediately.

Gilhaney's hard-driven effort pushed away by Darren Jamieson in the Livi goal, before his defence scrambled the ball clear.

A fierce challenge on Darren Petrie, one of several dished out by the visitors, caused a knock which necessitated Sons gaffer Murray bringing on Dylan Easton in his stead.

Big Andy Graham headed over after a free kick on the edge of the area for Dumbarton.

At the other end, Rogers brilliantly stopped a close range shot as Sons reeled back again.

At this stage, Sons did not look like creating enough to come back. Could they turn the game around in the second half. For much of the remainder of the match, it did not look as if they would.

Livingston piled on the pressure, energized by their half time lead. They looked by far the more likely of the two sides to score again in an essentially scrappy match.

Recognising that a change was needed, striker Chris Duggan came of the bench in place of defender Scott Taggart.

Still Livi pressed. Ibra Sekajja tried a clever lob over Rogers, but the ball ended up on the top of the net.

The final substitution for Dumbarton saw Archie Campbell come on for Megginson.

Then came a decisive moment, not just in this match but possibly in Sons' season.

Scott Agnew was brought down 20 yards out, just as he was about to unleash a strike.

From the resulting free kick her curled the ball sweetly and accurately into the net, equalizing the game at 1-1 and bringing an ecstatic response from the travelling support.

Suddenly Sons were in search of a winner. It came minutes later, right at the end of play.

A corner was half-cleared by the Livingston defence. In steamed Garry Fleming to unleash a piledriver of a shot to make it 2-1 to the visitors.

Livingston were in shock. They had looked for 80 minutes as if they were going to redraw the relegation battle, only to have victory stolen from them at the close.

It was a superbly determined performance from Dumbarton, who managed to win in spite of not playing especially well.

The result goes a long way to securing Sons' safety in the SPFL Championship.

For Livingston, it amounts to a sixth defeat in the last eight matches and leaves them firmly rooted to the foot of the table.