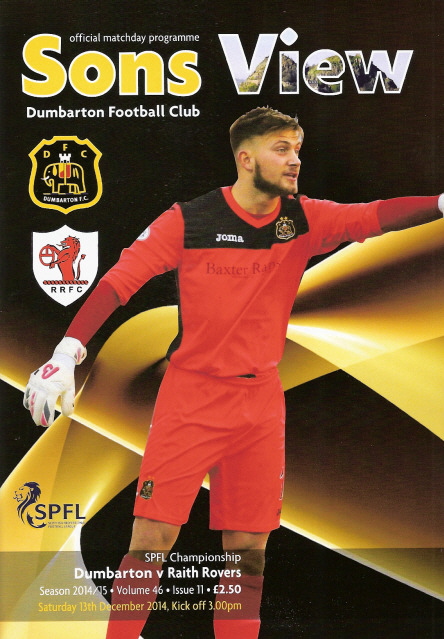 DUMBARTON claimed another vital three points at home to Raith Rovers this afternoon, with a Scott Agnew penalty near the end securing the gritty 2-1 victory.

The home side went ahead in the first half, but looked in peril when Rovers pulled one back after the break.

Commented gaffer Ian Murray afterwards: “Even though we went ahead through a great strike from Aggie, Raith played really well and continued to look dangerous. Despite that, I always thought we had another goal in us. While it may not have come the way we expected, it was a vital and very pleasing win.”

The victory came at a cost, however, with both Jordan Kirkpatrick and Mark Gilhaney going off injured early on – the former stretched away in obvious pain.

Raith looked to establish a decent passing game from the outset and created an early chance. However Christian Nade volleyed over the crossbar.

Mitch Megginson then had an opportunity for Dumbarton, firing wide from range.

On the far side of the pitch, by the away dug out, Jordan Kirkpatrick pulled up clutching first his thigh and then his lower leg, with no one near him.

After treatment at the side of the pitch he was carried off on a stretcher, to generous applause from both away and home supporters.

On came big striker Colin Nish. Garry Fleming was moved into the middle of the park, with Nish and Chris Kane up front.

Raith's McKay cut in from the right and fired a shot away, but Sons' keeper Danny Rogers saved comfortably.

Then Callachan half-volleyed the ball wide from the edge of the area as the visitors started to look dangerous.

At the other end, Chris Kane came close for Dumbarton, but his header went on to the top of the net.

Stewart cracked the ball just wide from close range for the away side. Both teams were creating chances.

It was Sons' svelt playmaker Scott Agnew who broke the deadlock, with a superb rising shot into the top corner of the net from over 25 yards on 20 minutes.

Raith Rovers immediately tried to hit back, but Garry Fleming was alert to the threat with a finely timed last-ditch tackle.

Just before the half hour industrious Mark Gilhaney sustained a knock and was replaced from the bench by Stephen McDougall.

Sons looked secure at this point. A glancing header from Kane went narrowly wide of the post.

However, Raith began to pin Dumbarton back in their own half in urgent search of an equalizer before half time.

Danny Rogers was nearly caught out by a Conroy free kick, but he managed to tip the ball over the bar.

During the break the West Dunbartonshire Epilepsy Support Group got supporters to hold up purple information cards as part of a community awareness-raising initiative.

Lack of communication between the Raith keeper and his left back nearly gifted Sons a goal shortly after the restart.

The visitors pushed back. Space for Ryan Conroy inside the penalty area allowed him to get a strike in, forcing Sons' Rogers into a decent save with his legs.

Then there was a great chance for Dumbarton. Chris Kane broke through one-on-one with Raith 'keeper McGurn after great work from Colin Nish. But the visitors' goalie was up to the task and nudged the ball away.

The visitors then came back into the match and equalised on 62 minutes, as Mark Stewart raced away, assisted by Conroy, and prodded the ball past Dumbarton 'keeper Rogers.

Raith had their heads up at this point and could have grabbed the lead. Sons had to use all their concentration to keep them at bay.

A couple of great crosses from Sonstrust Man of the Match Scott Agnew created chances for Dumbarton to go back in front, but neither Graham or Nish could convert them.

Next Agnew fired a free kick just over the bar and McGurn had to pull out a top-draw flying save to turn away a fabulous strike from Garry Fleming, who must have imagined his effort flashing into the net even as the Raith 'keeper got his fingertips to it at a sharp angle.

On 86 minutes manager Ina Murray made his last change of the afternoon, with Archie Campbell replacing Mitch Megginson.

It was Campbell who provided the deciding moment in a hard fought game. Fouled in the area, referee Bobby Madden, who had just given a couple of controversial decisions against Sons, pointed to the spot.

Up stepped Scott Agnew to place the ball high, wide and fast past 'keeper McGurn to make it 2-1 to Sons, who saw out the remaining few minutes to claim another vital victory.

Dumbarton are at home again in the SPFL Championship next Saturday, when the visitors are on-form Falkirk.