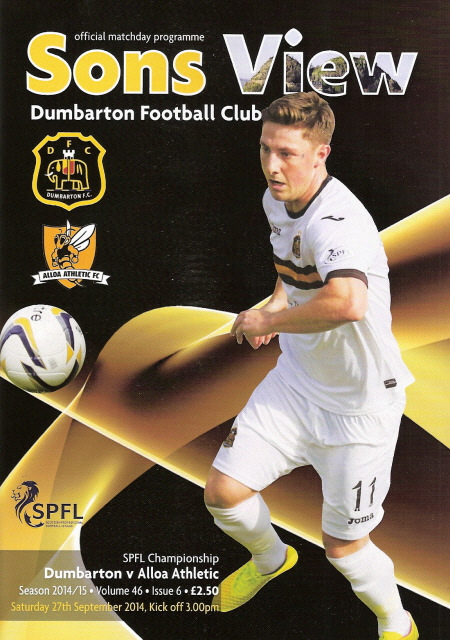 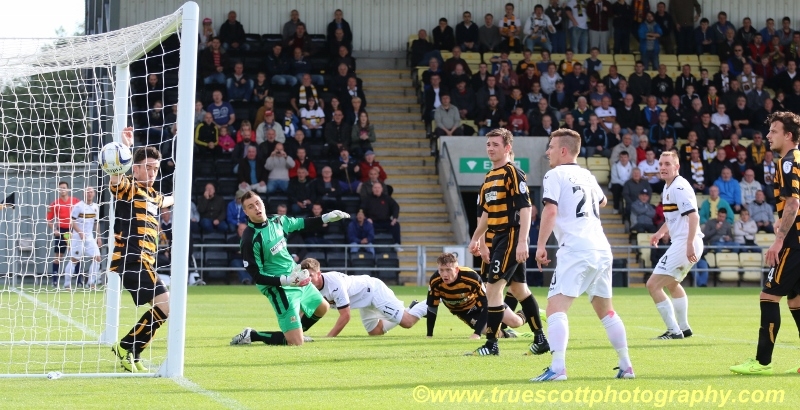 Dumbarton made it four games unbeaten in a row with this vital victory over Alloa Athletic at the Bet Butler Stadium.

A first goal for the Sons from summer signing Archie Campbell got the hosts on their way before Jordan Kirkpatrick and Colin Nish added second half goals. Stephen Simmons pulled one back in added time for Alloa.

Dumbarton had the first sight of goal, with Jordan Kirkpatrick volleying wide after a long throw from Scott Linton.

The visitors then had the ball in the net, with Greig Spence converting after Ryan McCord headed a cross back across goal. However, the stand side assistant judged that the ball had already gone out of play.

Sons could have had a penalty shortly after, with a cross from Linton looking as if it had been blocked by a high arm from a defender. But referee Steven McLean waved play on.

Mitch Megginson had an attempt for the hosts as he burst down the middle of the pitch before shooting wide from twenty yards.

Liam Buchanan replaced the injured Spence for the Wasps, and Buchanan nearly had an immediate impact as he had a powerful effort well saved by Danny Rogers at the near post.

Kirkpatrick nearly handed Alloa a goal soon after, with a back header for Sons' Rogers not reaching its target and instead landing at the feet of a visiting attacker.

Rogers did well to come out of his goal and put the Alloa man off before collecting the ball.

Garry Fleming then had an effort for Sons, but his effort from range was easily saved by Gibson.

Alloa gave away possession in midfield cheaply, with Mark Gilhaney picking up the ball and driving towards goal. Unselfishly, the winger cut the ball back and there was Archie Campbell to guide it into an empty net.

There was nearly time for a second for Sons before the break, but Gilhaney's pass for Megginson was just too far ahead of his teammate.

The second half started with Dumbarton having a goal disallowed.

Campbell got in behind the visitors defence and lobbed the ball over the 'keeper and into the net, only to be denied by the assistant's flag.

Shortly after, however, Dumbarton did make it two.

A corner from Scott Agnew was won by Kirkpatrick, and his glancing header floated into the far corner of the net.

Kieran MacDonald then replaced Megginson for the home side.

Rogers was called into action with a shot from ten yards going straight at him.

Fleming was determined to get on the score sheet, and he showed great strength to shrug off his man in midfield and had a shot from the edge of the area gathered at the second attempt by the keeper.

Alloa had a great chance to get back in the game with Buchanan trying to dink the ball over Rogers, however the keeper got a vital hand to the ball to push it wide.

Colin Nish replaced Fleming for the hosts, and seven minutes later was on the scoresheet.

A superb run from Kirkpatrick saw him run from his own half, skipping past three challenges before finding himself with just the keeper to beat.

The Sons man tried to lift the ball over Gibson, however it was blocked. There was Nish, however, to roll the ball into an empty net and put the game out of Alloa's reach.

Boss Ian Murray used his last change to bring on Stephen McDougall for Gilhaney, with the latter receiving the Sonstrust Man of the Match.

Alloa nearly got one back into the game in bizarre fashion with a cross nearly catching out Rogers and going in the far corner. However it hit the inside of the post and rolled away.

Nish then had a chance for a second. He tried to guide the ball over Gibson, succeeded, but it went over the bar as well.

Unfortunately for Sons, Alloa did pull a goal back in added time. A superb volley from Stephen Simmons flew past Rogers and into the corner.

Dumbarton move into fifth place in the SPFL Championship, and face Cowdenbeath at the Rock next week.