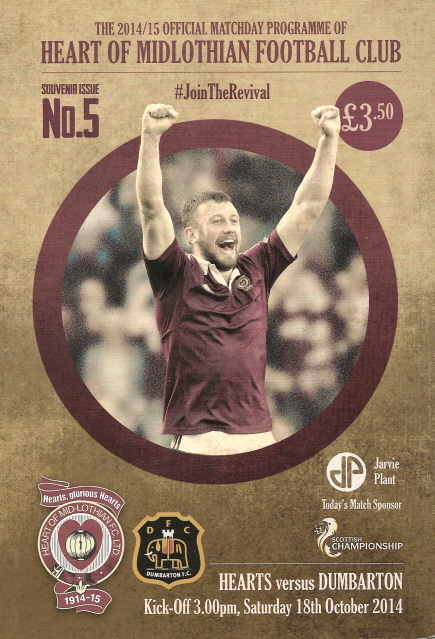 DUMBARTON fought hard at Tynecastle, but still ended up going down by four goals to a resurgent Heart of Midlothian side, who remain unbeaten at the top of the SPFL Championship.

After a subdued showing in the first half, Sons came out with much more intent after the break.

But despite getting on the score sheet after being 3-0 down, a full comeback was always unlikely, and two of Hearts' five goals came as a result of defensive hesitancy.

Boss Ian Murray commented afterwards: "We were the last team to take something from [Hearts] in the league, but they showed a killer instinct in this game.”

"They are nine points ahead and no-one can argue with the league table. I'm disappointed a wee bit, but there is no point in dwelling on [it]. We were unbeaten in six up until 4.45pm on Saturday, so one scoreline is not going to mean things are not working.”

Proceedings began with a display from all players in support of the Show Racism the Red Card initiative.

Sons absorbed a huge amount of pressure in the first forty-five minutes. Skipper Andy Graham marshalled the defence solidly overall, and put in several fine tackles himself. But there were also significant weaknesses.

It was nearly an awful start for Dumbarton with Callum Paterson's cross having to be put behind by David van Zanten just before Osman Sow could get to it. The resulting corner was cleared.

Van Zanten then almost gifted Hearts a goal with a weak back-pass. Thankfully Scott Taggart was on hand to make a vital and accomplished tackle to deny Sow a certain goal-scoring opportunity.

The early warnings were well taken, and Sons' defence started to look more concentrated, though Paterson was still being allowed a good deal of room on the right wing.

Dumbarton barely got out of their own half in the opening exchanges. Sow and Sam Nicholson had further attempts on goal that went wide for Hearts.

Then Sons' Colin Nish picked up an unnecessary booking for sarcastically applauding the referee when he was awarded a foul.

Sons started to push back. Nish found two chances. His first strike was blocked. Then Hearts goalie Neil Alexander made a fine, acrobatic save from his header, having had nothing to do in the match up to that point.

On 39 minutes the home side went 2-0 ahead when Scott Linton tripped Billy King, and Prince Bauben converted from the spot kick, despite Rogers nearly parrying it away.

The Dumbarton goalie then did well to keep out an effort from point blank range before the half-time whistle drew a difficult opening period to an end.

There were no changes for Dumbarton at half time, but Jason Holt replaced Sow for the hosts.

Sons had a couple of forays forward early in the second half, pushing more players forward and getting in a couple of tricky looking crosses and corners.

There was a decent chance for the visitors when Mark Gilhaney and Mitch Megginson combined. However, neither was able to get a shot away.

Then Hearts hit the bar and then went 3-0 up as defenders backed off substitute Holt on 56 minutes with his first goal of the season for the Tynecastle club.

Jordan Kirkpatrick came close for Dumbarton with a fine curling shot towards the top corner, before Scott Agnew fired a free kick over the bar.

In the first switch of the afternoon for Sons, Agnew then came off and was replaced by young Keiran MacDonald.

Hearts were looking for a fourth goal, and came close from Billy King.

On 73 minutes Dumbarton struck back.

A corner from Kirkpatrick was headed across goal by Nish and well finished by Garry Fleming (pictured), to roars from the vocal away support.

Shortly afterwards, gaffer Ian Murray made another substitution, taking off Colin Nish, who had enjoyed a good game, and replacing him with Archie Campbell, who was moved to a central position.

Five minutes later Steven MacDougall was on the park in place of Jordan Kirkpatrick.

However, it was the visitors who struck next, putting the match well beyond Sons' reach.

Hearts' Callum Paterson was allowed too much space as he steamed in to head them back into a three-goal lead at 4-1 on 83 minutes. King supplied the corner.

On 87 minutes another counter attack saw the Edinburgh side make it 5-1 through a long strike from Billy King.

Dumbarton players felt that they should have been awarded a free kick for handball in the build up to the Tynecastle side's final gal of the afternoon, but it was to no avail.

The home fans taunted both the Sons manager and away supporters with a scoreline which echoed both their more recent Cup final victory over Hibs and the result when Dumbarton and Hearts last met in the league at Tynecastle many years ago.