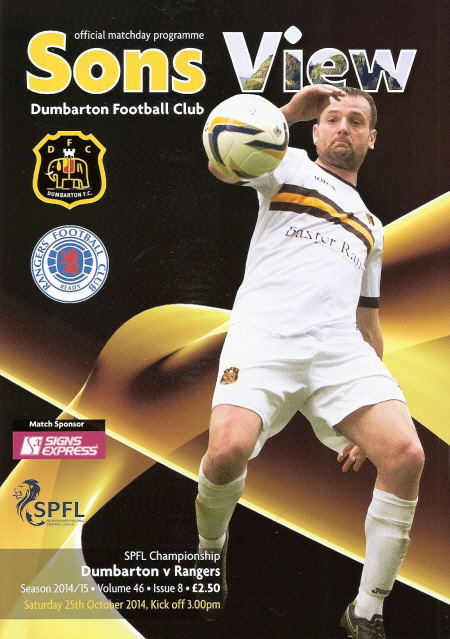 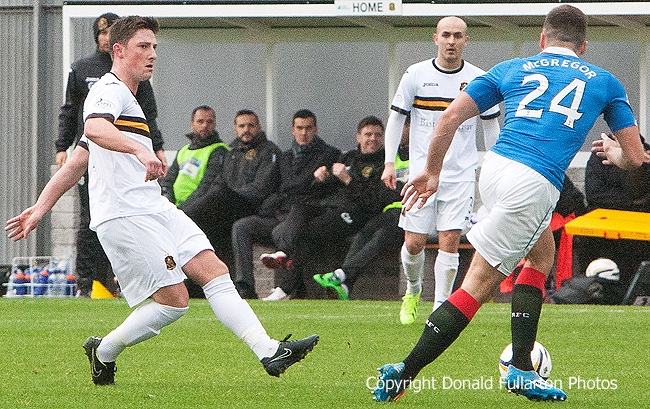 DUMBARTON fought hard against Rangers in their first competitive encounter at the Rock, but ended up going down by three goals and a comfortable win for the visitors.

While the Glasgow side had significantly more of the possession, both teams showed attacking determination and invention in an intense opening 45 minutes.

However, it was really only after the break that Sons began to string some moves together – being undone by a lack of cutting edge in the final third and two fine finishes from Rangers.

A couple of early long throws from Scott Linton for Dumbarton were defended effectively by the Ibrox men, before Lee Wallace got a shot in for them. It went well over the bar.

Rangers soon started to push the ball around and make the pace. A mix-up at the back for Sons was almost punished by Nicky Law.

The first chance for the home team came when Garry Fleming shot wide from the edge of the area.

A corner for Dumbarton was cleared. Moments later a cross from Mitch Megginson swung across the area but cleared everyone.

Sons could have been ahead when Mark Gilhaney capitalized on a defensive slip, ran to the goal line and turned the ball back for Colin Nish.

Unfortunately it was just behind the oncoming striker, and a golden opportunity was gone.

'Keeper Rogers was the hero for Dumbarton when he turned away a penalty from Lee McCulloch after David van Zanten had been harshly adjudged to have committed a foul in the area on 24 minutes.

But on 26 minutes, a lapse of concentration and a good Steven Smith assist allowed Kenny Miller to drive home the ball to put Rangers 1-0 in front.

Just after the half hour the injured Jordan Kirkpatrick came off to be replaced by Kieran MacDonald for Dumbarton.

Most of the pressure was still coming from Rangers, but a curling shot from eventual Sonstrust man of the Match Mark Gilhaney saved by Steve Simonsen.

Then a long throw from Linton was headed on by Nish, with his flick ending up on the roof of the net.

For Rangers, Kris Boyd, who had looked threatening on occasions, headed wide when he probably could have been expected to do better.

Before half-time, David van Zanten was given a yellow card for dissent by referee Andrew Dallas, after being penalized for a 50/50 tackle on Smith.

Sons enjoyed a good spell of pressure early in the second half, coming close through a deflected Colin Nish header and a decent strike from Mitch Megginson, which was nonetheless easily saved.

At the other end Rogers did extremely well to block and grasp a low shot when one-on-one from Kenny Miller, after the Blues forward had burst through the home defence.

Just beforehand Kris Boyd had also been denied by the in-form goalie, who used his feet to stop the ball.

On 61 minutes Lee Wallace made it 2-0 to the visitors with a fast move followed by a low, slanted drive into the far corner of the net from the right.

Archie Campbell was brought on for van Zanten by Sons gaffer Ian Murray on 67 minutes.

He soon proved his worth, zoning in on the Rangers goal before being denied by a very solid tackle.

A well-executed header from Kris Boyd extended the lead to a comfortable three goals for Rangers on 73 minutes, ending any hopes of a late Dumbarton revival.

There was another man off injured for Dumbarton on 79 minutes. Chris Turner, easing himself back after a period out, was the substitute for Mitch Megginson.

It took a further good save from Danny Rogers to push a Lewis MacLeod shot aside and deny Rangers a fourth goal.

In the end the visitors could have had one or two more goals but for some lackadaisical finishing. Equally, at east one of Sons' chances could have been finished.

There was no denying that the superior side one, but Dumbarton manager Ian Murray was still full of praise for the effort and determination showed by his team.

The two sides face each other at the Rock again next Saturday, in the third round of the William Hill Scottish Cup.