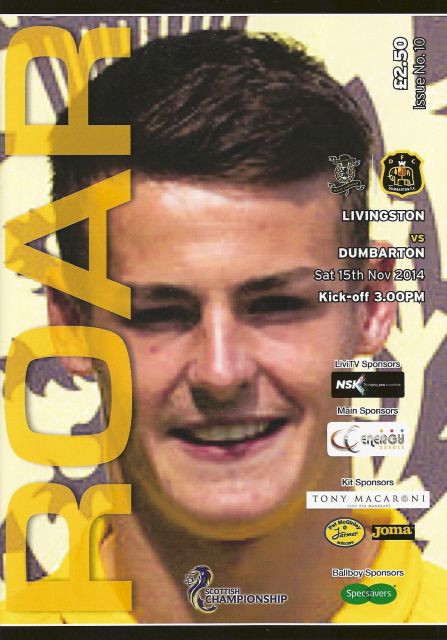 DUMBARTON achieved an incredible turnaround at Livingston, claiming a vital, hard fought win after looking as though things were going to unravel again.

In a disappointing first half, most of the possession and pressure came from Livingston and Sons ended up with no shots on goal.

The second period was a different story, and Sons finally brought their difficult spell to an end with a morale-boosting victory wrought out of possible defeat.

Commented manager Ian Murray afterwards: “They'll feel hard done by, but I thought with the aggression we showed in the second-half we just about shaded it. To get the three points is a massive boost for us.”

The home side dominated early possession, as Dumbarton struggled to find their feet.

When Stephen McDougall tried to set up a Sons counter attack he was pulled down by Kyle Jacobs, who nonetheless escaped a booking.

Much of the battle for supremacy was in the middle of the park, with neither side looking sharp enough to threaten decisively in the final third.

First sight of goal in the match saw Livi's Myles Hippolyte curl his effort in on Sons' keeper Jamie Ewings, who saved comfortably.

Colin Nish and Mitch Megginson linked up well on the left hand side, but the latter saw his attempt at a cross solidly blocked.

For Livingston, Daniel Mullen drove a menacing half volley over the bar from the edge of the area.

He it was who shortly afterwards produced the breakthrough when the home side went one up on 29 minutes.

A Dumbarton attack broke down, Andy Graham slipped, and Livi cut through. Mullen pounced, striking the ball into the bottom right hand corner.

Mark Gilhaney and Garry Fleming picked up bookings for tough challenges as Sons fought back.

However, the visitors were perhaps fortunate to just be one behind at the break, as a header from Callum Fordyce hit the bar, bounced along the line and was finally cleared.

It was a poor first half showing from Dumbarton, with no corners won, no shots on goal, almost nothing created and misplaced passes.

Sons were much more lively and determined at the beginning of the second half, but Livingston still looked threatening up front when they broke away.

Nish almost equalized within the first few minutes of the second forty-five, but his shot was stopped.

A shift in formation seemed to be benefiting Dumbarton, with Fleming pushing upfield.

Mullen almost had Livi two in front when he chipped past Ewings. The assistant's flag for offside denied him, however.

Scott Agnew whipped in a dangerous free kick. All it needed was a touch, but unfortunately Graham and then Fleming could not connect.

A fine block from Ewings kept out a Livi header from close range.

Megginson then did well to win the ball in midfield. He clipped a cross in, only to see it lurch just beyond reach.

At the other end, Mullen came close with a header. Nevertheless, the real momentum remained with Sons.

The fightback finally paid off on 62 minutes when Garry Fleming stormed in after a corner to slam the ball into the roof of the net to make it 1-1.

Then on 70 minutes Dumbarton went in front to the vocal delight of the travelling support.

Impressive work from Mark Gilhaney on the wing got the ball to Mitch Megginson. He trapped it, turned and fired a fast low shot home to the right.

Gaffer Ian Murray, sensing the need to consolidate, decided that it was time to make further changes.

Livingston threw everything at their opponents, but Dumbarton remained stalwart at the back.

In one final change Megginson was replaced by Kieran MacDonald and the visitors hung on into time added on to secure a morale boosting win.

The victory ends a difficult spell for Dumbarton, and provides renewed energy for their Championship campaign.