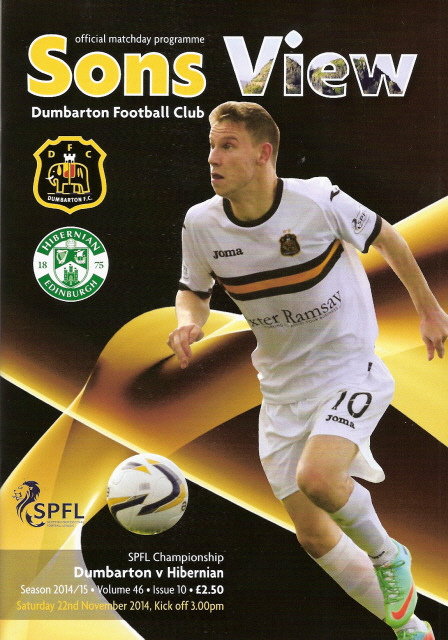 DUMBARTON and Hibs battled out a nine goal thriller at the Bet Butler Stadium, with the Edinburgh side running out 6-3 winners.

Goals from Scott Allan, Dominique Malonga and Paul Hanlon put the visitors in a commanding position at half time, before a spirited comeback from Sons saw them reduce the deficit to one thanks to goals from Chris Kane and Andy Graham.

Malonga added a fourth to increase the lead back to two, but Garry Fleming replied for Dumbarton.

A late goal from Sam Stanton made it 5-3 before Malonga completed his hat-trick in the closing stages.

Ian Murray, who was appointed Dumbarton manager two years to the day, made two changes to his side. In came Mark McLaughlin and Danny Rogers, replacing Stephen McDougall and Jamie Ewings with Sons lining up in a 3-5-2 formation.

The hosts had the first opportunity of the match. Mitch Megginson burst down the right hand side and pulled the ball back, only to see the ball cleared. It wasn't cleared far enough, however, as the ball fell to Mark Gilhaney. He shot for goal, but the attempt was blocked and Hibs managed to clear this time.

Scott Allan then had a free kick which Danny Rogers easily saved before Liam Fontaine nearly opened the scoring on two occasions.

First, his header from an Allan corner was headed off the line by Scott Agnew before Rogers had to tip over a header from the same man.

Then, in the space of six minutes, the visitors looked to put the game out of sight.

On 23 minutes, Allan managed to get clear of the Sons defence. He shot across Rogers and found the bottom corner of the net.

It was 2-0 just minutes later, as Malonga latched on to a flick on from Liam Craig and poked the ball around the onrushing Rogers with Andy Graham not able to clear the ball off the line.

The damage was completed on the half hour mark. Allan managed to turn two Sons bodies before putting the ball across goal and at the back post Paul Hanlon couldn't miss.

Malonga nearly made it even worse before half time, but his shot was deflected just wide.

Gilhaney then had a shot at goal for Dumbarton, with his driven shot going narrowly missing the target.

At half time, Murray made two substitutes and changed to a 4-4-2. On came Chris Kane and Kieran MacDonald in place of Mark McLaughlin and Scott Taggart.

Kane, returning after a long spell out, picked up from where he left off and scored within five minutes to give the hosts hope.

A free kick from Scott Agnew was headed across goal by Colin Nish and there was Kane to volley into the corner.

And, on the hour mark, Sons were firmly back in the game.

A superb cross from Gilhaney was met by Andy Graham as he powered his header into the top corner.

Yet, just when Dumbarton's tails were up, Hibs brought the comeback to a halt.

Malonga fired the ball into the top corner from 25 yards, giving Rogers no chance.

However, Sons didn't let this affect them and responded once more.

Garry Fleming, with his back to goal, turned his man and curled the ball into the bottom corner with his left foot and the hosts believed once more.

Lee Mair then had an opportunity, but sliced the ball wide from inside the area after a free kick from Agnew.

In the final ten minutes, Sam Stanton and Malonga made the points safe.

Hibs punished Dumbarton for having too many men up the park, with Stanton the man on the scoresheet after finishing past Rogers.

Stanton turned provider three minutes later, as he set up Malonga to touch the ball past Rogers and round off a remarkable game.

Sons remain seventh in the SPFL Championship, and have a free weekend this weekend with Alloa Athletic forming the opposition in two weeks time.