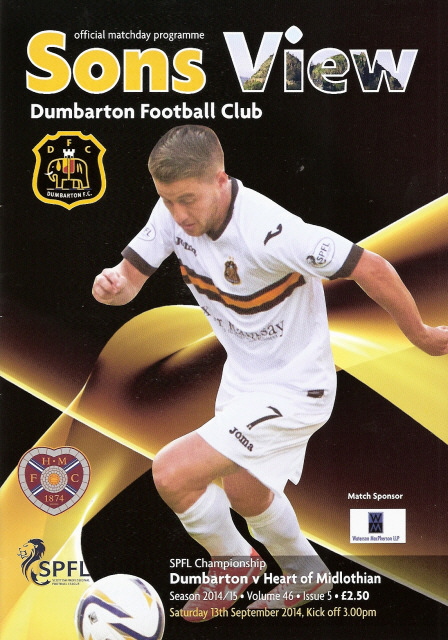 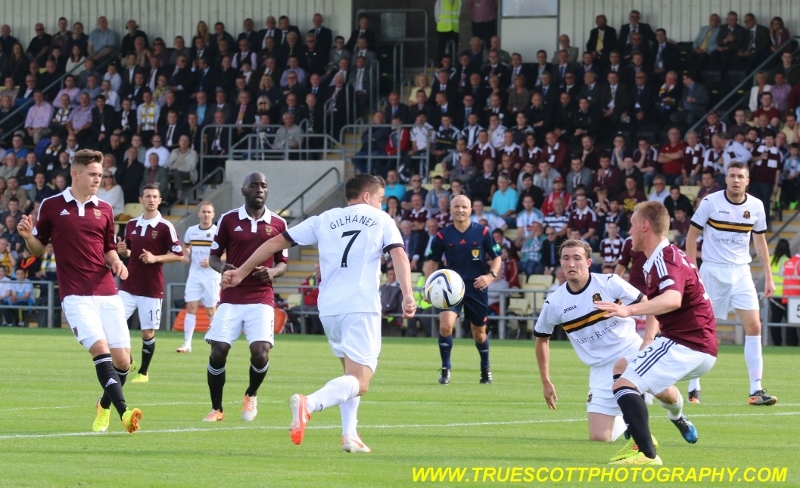 DUMBARTON put in a strong disciplined performance to claim an important point of Championship leaders Heart of Midlothian at the Rock today.

Though the visitors had much of the possession, Sons did a great deal more than 'park the bus', mounting a serious challenge at times. They could almost have snatched the match right near the end.

Boss Ian Murray hailed his team after the 0-0 draw, which saw the Edinburgh giants drop their first points of the season against part-time Sons.

Chris Turner had failed a late fitness test and missed the game. Jordan Kirkpatrick was restored to starting eleven for Dumbarton.

The two sides spent the first ten minutes weighing each other up.

There was a clash between Sons 'keeper Danny Rogers and Hearts front man Osman Sow as they clattered into each other while contesting a long ball coming out of the Jambos' central defence.

Early on it was clear that both teams were going to be tenacious in seeking to control the game, with the referee allowing some robust challenges.

On 12 minutes Adam Eckersley replaced Kevin McHattie for Hearts after he sustained an injury.

Shortly afterwards Dumbarton had their first chance of the game. A Linton cross was cleared by the visitors' defence before it was put wide by David van Zanten.

Then a Colin Nish header from the centre of the box missed to the left of the goal.

Hearts pressed back up field, but then in return a Chris Kane shot from the edge of the area for Sons whizzed past their far post.

The opening exchanges were fairly equal, with Sons looking, if anything, slightly more threatening.

A fabulous header from Kane from an even better Linton cross called Hearts goalie Alexander into action as he dived to his left to parry the ball away.

However, the Edinburgh side then enjoyed a sustained spell of pressure, forcing Dumbarton back from their early high line.

Danny Rogers made an important double save. First Jason Holt fired in, but the Sons 'keeper parried. Then he denied the onrushing Sow from a few yards out.

Skipper Andy Graham, eventually declared the Sonstrust Man of the Match, was having a great game, marshalling his defence to ward off the Maroon threat.

Towards the end of the half he rose in a threatening position to try to nod Dumbarton in front, but could not properly connect with an inswinging Scott Agnew free kick.

At half time the honours remained even in a goalless but absorbing first 45 minutes.

After the break Dumbarton pushed forward. A foul on the busy Mark Gilhaney gave Sons a good opportunity from outside the Hearts area.

However, Agnew's free kick proved ferocious and ultimately too powerful for anyone to be able to get on the end of it.

Kane did well from a corner before Graham headed over, with the best initial chances going to the home side.

The Hearts countering was strong, as the Edinburgh team tried to grab the initiative and put their opponents under some serious pressure.

James Keating, who had a couple of half chances in the first half, fired wide as his team came surging forward.

On 56 minutes Dumbarton brought on on Kieran MacDonald to replace van Zanten, who had been booked and was on his last warning.

Danny Rogers, putting in a good performance for Sons, stopped a Sam Nicholson shot to his right, after two misses from James Keatings.

Sons were well on the back foot by now, with Nish giving way to Garry Fleming on 68 minutes as the Dumbarton bench sought to steady the ship.

An Agnew free kick for Sons was squandered before Holt and McGhee missed for Hearts.

The home side were surviving now thanks to good organization and solid defending.

At the other end it was frustration time as Danny Wilson clearly knocked the ball out for the Maroons, but the referee awarded a goal kick instead of a corner for Sons.

Then Kane half-chance was just off target. Then the Hearts pressure continued again, as the high flyers from the capital desperately sought an advantage.

Right at the death it could have gone either way.

Then Sam Nicholson hit the post for Heart of Midlothian from the right side of the six-yard box.

Finally the game ended in a draw that probably did justice to both teams, though Hearts will definitely think they should have grabbed more than a point after piling on the pressure.

I'm pleased with the result – very satisfied,” Sons gaffer Ian Murray declared afterwards. “The desire of the players was there for all to see.”