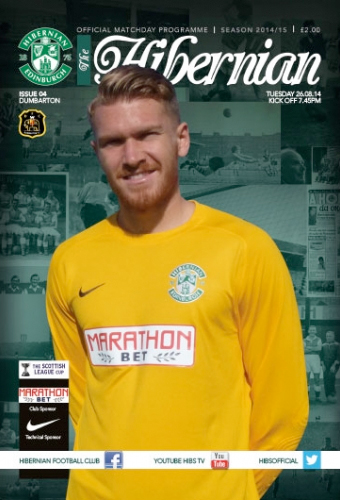 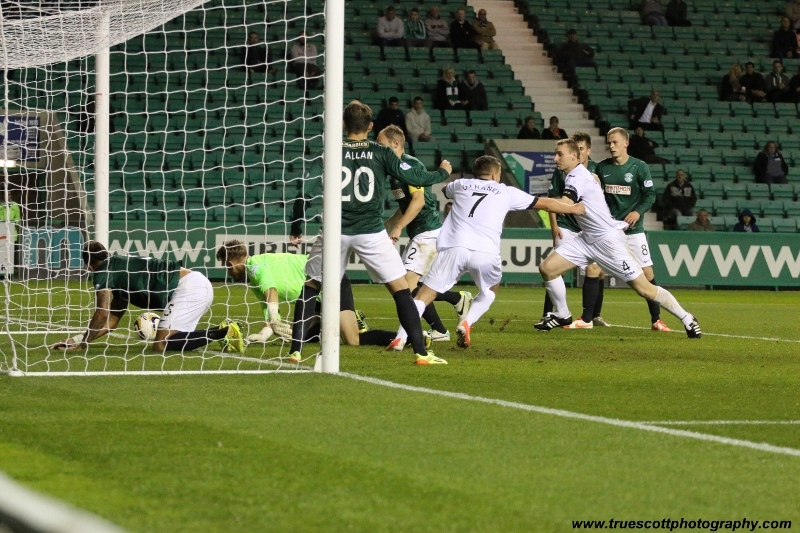 DUMBARTON looked on the brink of a famous Scottish League Cup victory against Hibernian at the Easter Road stadium, but a 2-0 second half lead evaporated in a late surge from the Edinburgh side.

Speaking to the press after the game, Sons gaffer Ian Murray praised his players for their effort and performance, “which we need to take into our league form”.

From the outset, the visitors looked better organized and more disciplined than they had against Rangers.

An early long thrown from Scott Linton in the Hibs half showed promise, but came to nothing.

Dumbarton 'keeper Danny Rogers was brought into the action early when he had to punch away a tricky cross.

Then the dangerous looking Farid El Alguai pushed away a challenge from Scott Taggart before cutting back to Danny Handling.

However the move involved one touch too many and Sons cleared their lines.

While both teams were stroking the ball around well, it was Hibs who were on the offensive, enjoying a raft of chances and a number of corners in the first 20 minutes.

First Handling, then Liam Fontaine, headed over the crossbar. Rogers stopped a drive from El Alguai.

Clearances from Linton and Andy Graham were needed to keep the home side at bay.

For Dumbarton there was little movement up front, although Mark Gilhaney tried to get in behind his opponents a few times.

The Edinburghers' central defence was also in solid form, frustrating their opponents when they did venture out of midfield.

The nearest Sons had to a chance during the opening 45 minutes was when Colin Nish headed in a David van Zanten cross. But Hibs' English goalie Mark Oxley saved comfortably.

At half time the visitors were perhaps fortunate that the score was still 0-0.

After the break Dumbarton came out with fresh determination and aggression, playing with more width and starting to cause Hibs problems at the back.

An early effort went into the side netting as Sons applied their first concerted pressure of the game.

The reward came on 51 minutes. Mitch Megginson reacted quickly to a Scott Agnew corner glanced on by Colin Nish, making it 1-0 with a half volley.

Eight minutes later Sons were in dreamland. A goalmouth scrap after another corner lead to a crucial second for the visitors. Once again Agnew and Nish were involved in the set up.

This time Mark Gilhaney had the last touch for Dumbarton into the bottom left-hand corner of the net, with the ball just crossing the line and cannoning off a defender on the way.

In between these tow blows, Hibs' Alex Harris had let fly at range as the Easter Road side tried to claw themselves back from the shock reversal. His shot was scythed well over the bar.

The second goal really seemed to wake the home team up, however. There was a new urgency in their play.

Sons, by contrast, faltered in their attacking intentions, and now found themselves pinned back in their own half, defending an unlikely 2-0 lead with 20 minutes remaining on the clock.

The tension mounted. Danny Rogers pushed over another long-range effort before making a great save from the resulting corner.

On 72 minutes Ian Murray made his first switch, bringing on Jordan Kirkpatrick for Colin Nish.

Five minutes later, after Rogers received some treatment for a knock sustained during a brave punch away, Hibs were back in the game.

Farid El Alagui firmly headed in a cross from the right, leaving the Sons 'keeper stretching in vain. It was back to 2-1.

Garry Fleming, who had played a fine game for the visitors, was replaced by Archie Campbell.

Shortly afterwards the same player made it 2-2 with another powerful header from the centre of the area after he was left virtually unmarked.

Dumbarton's cup dream had unraveled in the space of a few minutes, and now Hibernian looked the more likely team to grab the clincher.

As the match headed into time-added-on the home side seized the winner with a breathtaking strike into the top corner from substitute Sam Stanton.

It was a cruel blow for brave Dumbarton, greeted with ecstatic applause from the Hibs faithful.

There was now no way back for Sons, whose hope had been snatched away in less than quarter of an hour at the end of a competitive, entertaining match.

Bryan Prunty was switched out for David van Zanten on 92 minutes, but had no time to make an impact.

Overall, Hibs had enjoyed 22 shots on goal, with eight on target, ten corners and some 53% of the possession.

But despite the last gasp defeat, Dumbarton will take considerable pride in a boosted performance: one that they now need to replicate in their league campaign, starting with a vital home game against Livingston.