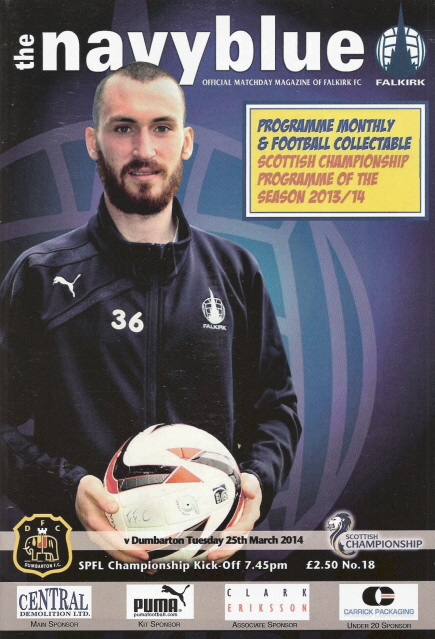 DUMBARTON suffered a disappointing defeat away at Falkirk tonight, after a generally lacklustre performance.

Sons slipped to sixth position in the SPFL Championship as a result of the loss, with two tough away games against Livingston and Greenock Morton coming up.

Assistant manager Jack Ross took charge from the touchline for this match, because gaffer Ian Murray was with his wife for the birth of their second child – the event that turned out to be the real celebration on an otherwise evening, football-wise. The boss was able to be there for some of the first half onwards.

Agnew and Gilhaney got the game underway for Dumbarton, but it was the Bairns who started making the running early on.

The home side were swift in attack, using the wings well to cut in behind Sons' determined back line. They also bested their opponents in the middle of the park and looked solid and resilient at the back – a tough proposition to crack open.

Inside two minutes Craig Sibbald got a shot in on Sons' goal, blocked by Ewings.

Mark Beck nearly found a dangerous cross for Falkirk on four minutes, but narrowly missed out. The warning signs were there.

On seven minutes Will Vaulks rose in the centre of the box to test the Dumbarton goalie again. He was up to the task.

Sons tried to push back but kept getting pinned down in their own area. Defending well, they were still allowing Falkirk far too much possession.

The home side looked confident and fluid. Blair Alston and Rory Loy had further efforts on goal from outside the area around the 20-minute mark, with both shots rising high over the crossbar.

Loy's great curling strike from 20 yards went into the roof of the net.

On 24 minutes the dam finally broke. Mark Millar was the provider for David McCracken to come in with a simple header past Ewings to give the Bairns a 1-0 lead which few would argue they did not deserve.

For the rest of the half the game ebbed and flowed, but Falkirk seemed on top and Dumbarton never really threatened to break back.

The nearest Sons had to a chance was when the ball nearly broke for Garry Fleming in the box, but Bairns 'keeper Michael McGovern collected just before he could get there.

Five minutes before half time Jordan Kirkpatrick replaced Scott Linton for Dumbarton, with the latter sustaining an injury that does not bode well for the season run in.

There was no further scoring or incident before the two teams retired for half time.

Things did not improve for Sons after the break, despite a couple of bright early moves – particularly when a shot from Agnew looked as if it might sneak in at the near post.

However, McGovern in his light blue kit got his body behind the ball and dragged it back before it could cross the line and give Sons fresh hope.

Then Hugh Murray was booked for dissent in an incident which would have costly reprise for him at the end of the evening.

At the other end of the park, the ever-threatening Rory Loy nearly flicked the ball on for Mark Beck at the back post but, but it ran just too far ahead of him.

On the hour Colin Nish came on for the recovering Chris Turner and immediately displayed a touch of class with a flick-on.

Sons moved to what looked like a 3-5-2 formation, trying to wrestle control in the centre, but without much luck.

Sadly this was not to be the kind of evening when Dumbarton came from behind to clutch victory (or even a draw) out of the jaws of defeat.

On 63 minutes Ewings was called into action again to thwart Blair Alston for Falkirk, beating his powerful shot away.

A series of corners for Sons showed enterprise and determination, with no reward on the end of them.

Ewings just managed to tip a shot from Millar over his crossbar.

The killer blow from the Bairns came on 73 minutes. Beck assisted Loy, who drew and beat his man before driving home on the left past the Sons goalie from a tough angle.

There were a couple of bookings and little else happening in the last quarter of an hour of the game, as Falkirk held on to the game and substituted a couple of their players.

The disappointment of the evening was compounded by Hugh Murray being sent off on 88 minutes for receiving a second yellow card.