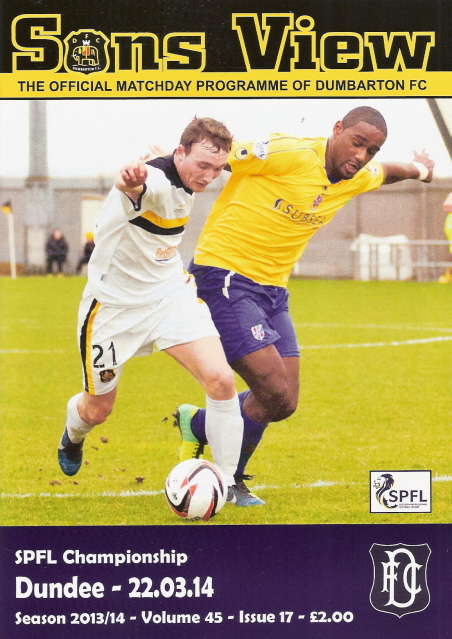 DESPITE dominating most of the first half and enjoying a number of chances, Dumbarton had this game snatched from their grasp, losing to a late defensive mix-up at home to Dundee and then missing a penalty.

Sons forced their top-of-the-table opponents back into their own half for much of the first 45 minutes, but just could not find the net.

Following half time Dundee started to regain the initiative, looking increasingly dangerous in the final third.

Speaking after the game, Sons manager Ian Murray commended his players for an excellent display before the break, and expressed "huge disappointment" at taking nothing from the game after so much effort.

It was a revamped line up that kicked off against high-flying Dundee on an afternoon that veered between bright and sunny one moment and cold and damp the next.

Scott Agnew and Mark Gilhaney dropped to the bench in the Sons line up, while Mark McLaughlin and Scott Linton returned to the starting lineup, while Scott Smith was left out.

The early signs of spark were from Dumbarton. Linton's shot from distance was parried by Kyle Letheren. Chris Kane followed in but the Dark Blues 'keeper was able to clear.

Kane sustained a knock from a robust challenge, but was concerned to carry on.

Mitch Megginson was next to have a go for Sons. His fine effort flying towards the top corner was just tipped away.

Next Kane saw his glancing header go just off target from Linton's cross as Dumbarton began to apply real pressure in the opening stages.

At the other end, Declan Gallagher headed the ball over from a corner for the Dees.

Then when Dundee 'keeper Kyle Letheren fumbled the ball into his own goal, Dumbarton players, staff and fans alike were convinced they had taken the lead.

However referee Brian Colvin had already blown his whistle for a push at the back.

It took a little time for Dumbarton to regain their equilibrium and begin to press forward again after that large disappointment.

As the first half petered out towards the half way mark, Kevin McBride received treatment for a minor knock. He hobbled off and was replaced a few minutes later by Gavin Rae for the visitors.

Turner and Davidson both took a sore knock charging in on a full blooded but fair 50/50 ball. It looked as if Davidson had come off worse, but both made back on for the restart.

The half closed with three significant chances. First, good pressure from Kane nearly resulted in goal as Letheren's kick struck him and went wide.

Then the dangerous looking Nade fired inches wide of the post for the away side.

Lastly, a wonderful save from Letheren blocked Kirkpatrick's effort after a Kane pull back before the referee brought the first fort-five minutes to a close.

After the break there was definitely a greeter sense of urgency in Dundee's game.

Nade led the charge, heading right into the hands of Grindlay. Suddenly the visitors were getting to the ball quicker.

Then Chris Turner volleyed over the bar after the ball was headed out to the edge of the area.

A great turn and shot from Kane was blocked in the box, before Sons substitute Garry Fleming came onto the park for Jordan Kirkpatrick.

Then suddenly Dundee were ahead. The fatal blow came when Sons goalie Stephen Grindlay was forced to head the ball clear from the edge of his area after some lax defending, and substitute Peter MacDonald beat him with a shot from a tight angle as he rushed back to his line.

A few minutes later it looked as if Dumbarton could claim back a deserved point when Chris Kane was fouled in the area near the end of a competitive match.

But Bryan Prunty's penalty kick – just after he had come onto the park – was too near to Letheren, who clawed it away to the obvious relief of the visiting side.

Gilhaney volleyed wide from a Prunty knockdown with only a few minutes left on the clock. But the frustration continued and it was not to be for Dumbarton.

Defender Mark McLaughlin was awarded the Sonstrust Man of the Match award for a stalwart display at the back.

Next up for Dumbarton is a series of three away games against Falkirk, Livingston and Morton.

It is going to be a tough schedule, but the team will be determined to grab back the initiative in the SPFL Championship promotion play-off race.