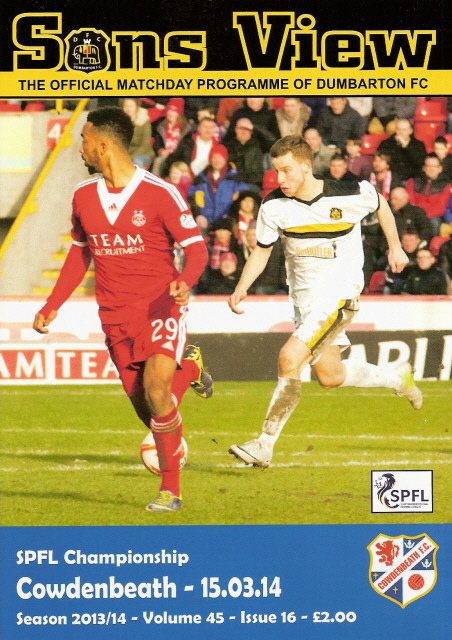 FOUR goals after the break and one before ensured three crucial points for Sons in a hectic game against Cowdenbeath at the Bet Butler Stadium.

Dumbarton controlled the match well in the first half and went further ahead in the second, despite a slight wobble when Cowdenbeath pulled a goal back.

In the end, however, it was a comfortable victory for the Sons, and one which definitely cements their status as promotion play-off place contenders.

Nevertheless, the manager was determined not to get carried away in his after-match comments.

"I think the scoreline may be flattered us a bit today, because we scored at good times. But we definitely deserved to win the game," he declared.

The Blue Brazil have put the crushing defeat down to one of their worst displays of the season so far. Having said that, they matched the hosts for possession before the break but lacked a cutting edge up front.

In the second 45 minutes their defensive frailties were ruthlessly exposed as Dumbarton surged forward to go nap.

Sons looked on their guard throughout the match. They had an early warning when Greg Stewart right-footed a shot from the centre of the box that went perilously close to opening the scoring after less than a minute and a half.

The ball was soon up at the other end of the pitch. Colin Nish had a tricky chance from a difficult angle on the left, watching as the ball flew high into the side netting. Megginson did well to put him through.

Within the first 10 minutes Chris Turner, making a welcome return in the white, gold and black shirt, lofted a strike over the bar from outside the box.

Then Mark Gilhaney had an early effort blocked and Chris Kane was soon in the action with another useful looking punt from a corner kick.

Perhaps the closest chance came for Cowdenbeath when Rory McKeown let fly with a fantastic sliding volley that smashed against the post, rolled along the line and then went behind for a goal kick. It was a near let off for Sons.

Chris Kane had the ball in the net again for Dumbarton minutes later, but it was disallowed after the referee spotted a foul in the build up.

The loanee had another attempt when he unleashed a shot from 20 yards after a flick of the ball from Nish, narrowly missing the target.

Jordan Kirkpatrick, who had another good game, right-footed a further strike in from around 35 year yards that went wide to the right.

For the visitors, Jon Robertson and Nathaniel Wedderburn had attempts on goal but never really threatened.

Cowdenbeath had enjoyed far more of the possession than the shot ratio was suggesting at this point in the game.

Robertson came close to levelling for the Blue Brazil just before the break, but Dumbarton goalkeeper Stephen Grindlay came to the rescue with a fine save.

Gaffer Ian Murray had spent the first half watching the game from the stands. For the second period he decided to return to the dugout to get his usual view on proceedings.

Scott Agnew had the first decent chance of the half when the ball dropped to him following a free kick. He shot went wide of the post.

On 54 minutes Michael Miller claimed his second goal for the club when the ball broke to him after deflecting off Chris Kane. He took full advantage of the situation, slotting the ball neatly into the corner of the net to make it 2-0 to Sons.

Kane went down in the area after knocking the ball round Cowdenbeath keeper Thomas Flynn shortly afterwards. However referee Crawford Allan decided that it was a dive and duly booked him.

The visitors were not lying down and going away after the second Dumbarton goal. Grindlay was called into action to hold a strong drive from James Fowler.

Sons looked comfortable. Then a moment of laxness from a corner kick enabled the visitors to pull one back when John Armstrong poached a goal on the edge of the box.

All of a sudden Dumbarton started to look rather rocky as Cowdenbeath piled on the pressure and came streaming forward in numbers.

On 64 minutes Sons rung the changes from the bench when Hugh Murray replaced Scott Agnew for the first substitution of the afternoon.

Greg Stewart put in a left-footed long-range shot that went over the bar having taken a late upward turn.

A coolly taken free kick from Jordan Kirkpatrick ten minutes after Cowdenbeath had got back into the game put the score back to 3-1 and suddenly took off the pressure that had been building on Sons.

Megginson had another half chance before Steven McDougall came on for Mitch Megginson and Gary Fleming replaced Colin Nish for Dumbarton.

The substitute had an almost instantaneous impact by increasing the lead to 4-1 on 80 minutes with his first kick of the game from another well-worked move. It was a fine opportunist goal.

Thomas Flynn saved from Jordan Kirkpatrick at the Cowdenbeath end, while Stephen Grindlay rose to grab a header from Kyle Miller in his own box.

Chris Kane wrapped up an exhilarating match and performance for Dumbarton with a fifth goal on 90 minutes, just before the referee blew for full time.

The victory keeps the Sons of the Rock in a good position for a strong finish to their impressive SPFL Championship season.