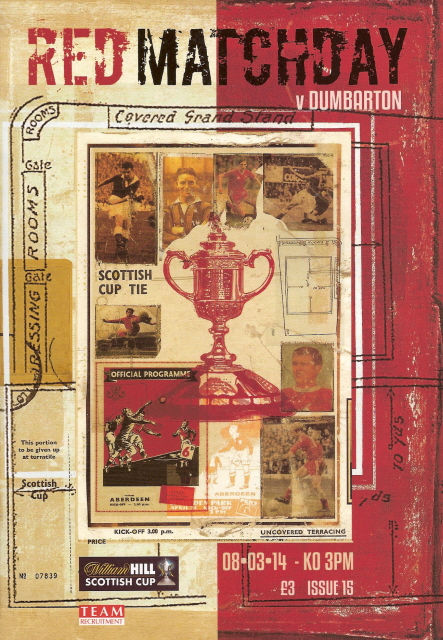 THE Sons of the Rock put up a fine, gritty display against Aberdeen at Pittodrie in the Scottish Cup quarter finals, but in the end they just fell short with their latest shot at glory.

Nearly 700 loyal Dumbarton fans followed the team up north and cheered them every step of the way in an entertaining encounter with the fancied premiership side.

Sons more than held their own in the first half and came out looking for a breakthrough after the interval.

In the end it was a moment of defensive frailty and a couple of missed opportunities that stood between Dumbarton and a sought-after replay at the Bet Butler Stadium.

While few commentators would have denied that the Dons were worthy of their narrow victory overall, no one would have said that a draw would have been an unfair result if the visitors had managed to claim a goal.

The game was no mere face-saving exercise for the lower league side. Both teams were actively looking for a result throughout. Indeed, for much of the game, the team the bookies had as firm favourites were appearing decidedly nervous. It was after they scored that they began to show their class.

"I thought we were magnificent at the back and we can have great confidence going forward for that [promotion] play-off place now," remarked Sons gaffer Ian Murray afterwards.

"I'm disappointed with the scoreline, losing 1-0 to a set play, just after we had a good chance to go ahead ourselves.

"But in terms of performance, work rate and commitment the players were magnificent from the first minute to the last -- none more so than Paul McGinn, getting into the box with the minutes to go and heading over the bar.

"It was a fantastic chance. We know right backs are not known for their goalscoring power... but overall Paul had a fantastic game. We put up a great show as a team."

The match began with both sides tentatively probing and questioning each other's tactics and positioning in midfield.

Sons received a danger signal on four minutes when Shaleum Logan crossed for Aberdeen and Dumbarton captain Andy Graham had to turn on his heels to achieve a clearance that went narrowly behind Stephen Grindlay's post.

After that initial warning the visitors started to settle down. They put up a resolute back line when the Dons pushed forward.

Highly-rated load player Chris Kane started to cause difficulties for the Aberdeen defence in the first quarter of an hour.

Sons had their first real opportunity on 11 minutes when Scott Linton placed a right-footed shot just wide from the left-hand side of the box.

Four minutes later a sweeping move from the premiership side almost produced the first goal of the game.

Shortly after Mark Reynolds won a free kick in the attacking half, Jonny Hayes capitalised on a swift attacking move to swing in a great cross. The ball beat everyone in the area. Barry Robson, Aberdeen's most effective player of the opening 45 minutes, dived in with a close-range header from the right.

It was 'keeper Grindlay, back after a week's absence, who came to Dumbarton's rescue with a superb, diving save. He then reclaimed the ball as it bobbled on the line, having ricocheted back from Andrew Considine.

Robson was again the danger man when he let loose a low drive that steered into the side netting, with Grindlay covering.

Another shot from Cammy Smith was deflected wide as Sons wheeled back to defend their line.

At the other end, Chris Kane took a right-footed shot from outside the box. Jamie Langfield stopped it in the centre of the goal.

Both teams were attempting to wrestle control in the middle of the park at this stage in the game, with Aberdeen looking a little less effective than expected and Dumbarton closing them down quickly and staying alert both to the dangers and to the opportunities as they presented themselves.

Just short of the half hour Barry Robson came in with another shot from outside the box which was blocked by Grindlay in the bottom left-hand corner.

A couple of Langfield's clearances from the Aberdeen goal seemed to lack conviction and when Mark Gilhaney came in with a cross the Dons goalie fumbled and dropped the ball, relying on a clearance by captain Russell Anderson to spare his blushes.

On 42 minutes ex-Don Mitch Megginson motored through and let loose a left-footed shot just outside the box. It was a promising effort, but began to rise too early and went over the bar.

As referee Kevin Clancy sounded the whistle for half time the match was evenly poised, with Dumbarton undoubtedly the happier of the two sides, having established their credentials and dampened any footballing fire that Aberdeen may have been planning to ignite.

Equally, the Sons had enjoyed a few chances of their own and went back to their changing room with applause from an enthusiastic home support ringing in their ears.

After the break it looked as if determined Dumbarton were really in the mood to find an opener.

Four minutes into the second half veteran Colin Nish displayed some fine skills to fox the Dons defence on the left and set up Scott Agnew for a deflected shot which Langfield was relieved to snatch into his hands.

But Agnew was not finished. Moments later he tested the Aberdeen keeper again with a low, driving shot from 25 yards which was more difficult to handle than it first appeared.

With a little bit more luck Dumbarton could have been in front by the time they conceded the goal, scored on 52 minutes, that eventually decided a tight game.

Disappointingly, it came from two fairly straightforward mistakes at the back. First, Scott Linton, who otherwise had an effective game, made the decision to try to shepherd out a ball under pressure from Cammy Smith.

The wily Aberdeen man just got the better of him to win a corner. Up stepped Barry Robson to swing in a pinpoint ball to the onrushing Adam Rooney, who shook off his marker and rose to place a firm header beyond the grasp of the diving Stephen Grindlay.

It was Rooney's sixth goal in eight games since his arrival at Aberdeen from Oldham Athletic, following successful spells at Birmingham and Inverness Caledonian Thistle.

Pittodrie's home supporters, who had been relatively subdued until this point, let out a burst of relieved applause when the goal went in.

Up until this point their team had been looking less than assured, and memories of recent Dons cup defeats to lower league sides must have been at the back of their minds at the very least.

The sense of release from anxiety also seemed to transmit quickly to the Aberdeen players.

They upped their pace and began to throw themselves into a series of swashbuckling attacks which threatened to add to their single goal advantage.

However, Dumbarton remained resolute and focused in midfield and at the back, warding off the threats as they emerged, and looking out for a few opportunities to counter-attack.

Both Michael Miller and Jordan Kirkpatrick made useful contributions for the Sons.

Corners in swift succession at both ends (Aberdeen had ten throughout the game, compared to one for Dumbarton) failed to produce any further immediate drama.

Russell Anderson had another punt for the Dons on 59 minutes, but his effort from the centre of the box went wide to the right and failed to cause any alarm.

Just afterwards, Dumbarton manager Ian Murray made his first substitution of the afternoon, occasioned by a knock to Colin Nish. Garry Fleming was the man who came on.

As the game restarted Chris Kane took a shot from the right side of the six-yard box, again missing the target.

Aberdeen took the ball downfield once more and this time it was Jonathan Hayes who had an attempt on goal that went wide for the home side.

On 63 minutes an injured Scott Linton and gave way to Scott Smith for Dumbarton, occasioning something of a reshuffle in the visitor's pack.

Sons' attempts to get back into the game were undoubtedly hampered by bad fortune in this respect.

Ryan Jack nearly made it two for Aberdeen on 67 minutes when he manoeuvred into the centre, thumping in a shot which left Grindlay with no chance. It struck the outside of the right-hand post and bounced clear. A very close call.

Not long afterwards Willo Flood went close with a header from the centre of the box, as Dumbarton found themselves on the back foot.

Murray made his final switch for Sons on 70 minutes, when Bryan Prunty replaced Scott Agnew.

At that point Aberdeen took the opportunity to bring off Nile McGinn and bring on Cameron Smith with around 20 minutes left on the clock.

The revived Adam Rooney had a couple of chances in the following 10 minutes, the first of which went well over the bar and the second of which careered wide to the right.

On 82 minutes the Dons took their prime target man off and brought on Scott Vernon to help close out the game. Barry Robson followed Rooney four minutes later, with Nicky Low coming on in his stead.

On 88 minutes Dumbarton had undoubtedly their best chance of the game – one which would almost certainly have earned them a replay had it gone in.

Garry Fleming swung in a superb cross which beat everyone in the area for height and pace. Paul McGinn did well to spot the opportunity and to charge through, but he pounded his header into the ground. It bounced agonisingly over the crossbar as the enterprising right-back buried his head into the ground in disappointment.

Watching the relay, anything either side of Langfield would probably have gone into the net, but it was a forward 's chance rather than a defender's.

As the game headed into time-added-on Aberdeen had another couple of minor chances.

Flood saw his shot from outside the box blocked, while Grindlay put in one final save in the centre of the goal from Ryan Jack.

Referee Clancy brought an absorbing match to an end shortly after Megginson had conceded Aberdeen's tenth corner on 92 minutes.

There was warm applause from both sets of supporters for a fine Dumbarton performance, for a successful result grinded-out by Aberdeen, and for a match which had produced plenty of tension and drama at both ends.

"It was a nice distraction for us," commented Sons boss Murray following the game.

"Now it's back to the basics. We are going to try to pick up as many points as we can and see what happens in the league in May."