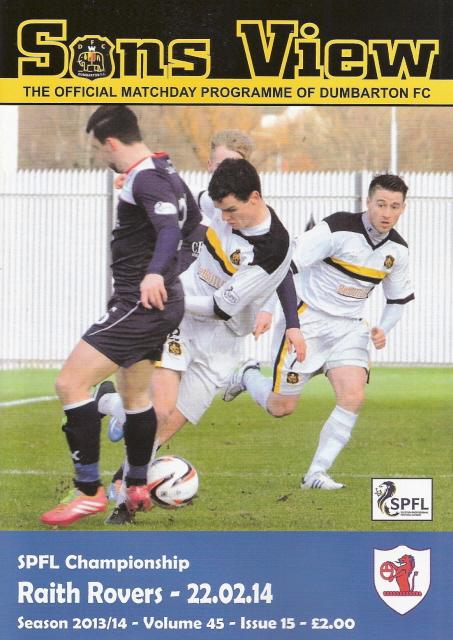 DUMBARTON shared the points with Raith Rovers in an exciting, high-scoring draw at the Bet Butler Stadium.

The draw means that the men from the Rock still remain undefeated in 2014 – a remarkable achievement.

Sons went 1-0 up through Colin Nish, before Gordon Smith equalised. Chris Kane regained Dumbarton's lead although John Baird and Smith's second of the game put the Rovers in front. Scott Agnew rescued a deserved point for the home side just after the hour mark.

Raith got the game underway and it was they who had the first chance.

Kevin Moon was slipped through only to be stopped by Sons captain Andy Graham who stood tall and cleared danger.

Dumbarton had a good opportunity of their own to score before Raith enjoyed a further two great chances.

Kane and Nish linked up for the first time in the afternoon. Kane was tackled, got back up and played the ball across goal for Nish, who saw his shot saved by the 'keeper's legs.

Jordan Kirkpatrick then cleared a header off the line to keep the score at 0-0, followed by Raith missing a clear-cut scoring opportunity.

Ross Callachan got in behind the Dumbarton defence and cut back for Smith. The ball was just behind him though, and he squandered what appeared to be an easy tap-in.

The Rovers threatened again just before Dumbarton opened the scoring. Grant Anderson volleyed the ball back across goal, following a cross in from the left, but Andy Graham stepped in to clear the danger.

Then, just on the quarter of an hour mark, Sons were 1-0 up.

Kane had his effort from inside the error saved by Lee Robinson. The ball came out to Nish. who fired into the top corner with his left foot.

However, just minutes later the score was level again.

An unfortunate slip from Scott Linton on the halfway line gifted the ball to Baird. He drove forward before laying a pass off to the side for the onrushing Smith, who made no mistake in firing under Stephen Grindlay and into the corner of the net.

Raith had another couple more opportunities before half time.

Sons goalie Grindlay made a good save whilst lying on the ground after he had punched away a cross.

Baird then headed just wide following a cross in from the left.

However, it was Dumbarton who regained the lead. Kane chased the ball down, turned his man, and put the ball across Robinson into the far bottom corner.

A magnificent save from Grindlay followed. A shot from the edge of the area took a wicked deflection towards the other corner, but the big 'keeper managed to shift his weight to the other direction, after committing to save the original shot, and somehow got a hand to the ball.

Sons nearly added a third just before the break with Mitch Megginson's header at the back post beating the keeper, but being cleared off the line for the final action of the first half.

Agnew had a free kick from the edge of the area float just wide after Robinson brought down Kane. The Raith man picked up a yellow card for this offence.

Anderson nearly equalised for Rovers after a corner was flicked onto him at the back post however he couldn't make contact.

There then followed an astonishing three goals in seven minutes.

Raith got the first one. Grindlay tipped a Smith shot onto the post; the ball rebounded to Baird who made no mistake in firing into the empty net.

Minutes later, Raith had turned it completeley around and were 3-2 up. Smith got in between Dumbarton's two centre backs and headed past Grindlay into the top corner.

Sons got back into the game after these moments of madness and soon found themselves level.

A free kick from the right was headed out by the Raith defence. It only got as far as Agnew on the edge of the area. He controlled the ball with his chest before volleying into the top corner from twenty yards giving the 'keeper no chance.

Then Kane managed to turn his man again but blazed over, though he had Colin Nish and Mark Gilhaney in support.

Paul McGinn had the only real opportunity for either side to find a winner. His left footed curling effort from 25 yards was tipped over the bar.

The result means Dumbarton move up to fourth place in the SPFL Championship, and into the promotion play-off positions.