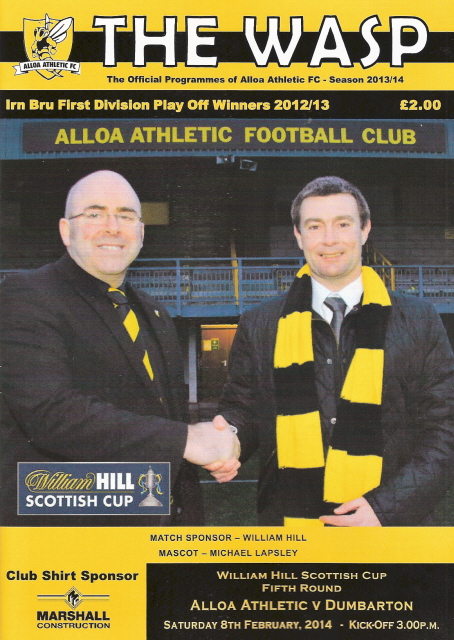 DUMBARTON progressed to a historic William Hill Scottish Cup quarter-final, thanks to a hard fought 1-0 win away to Alloa Athletic at Recreation Park.

Sons had the lion's share of possession in the first half, finally taking the lead through Colin Nish, after a well-worked build up. Despite ups and downs, they held on to the end to claim a famous victory.

“It's a huge achievement for the club to get there and it's a massive chance for the players, staff and the fans,” said manager Ian Murray afterwards, admitting that the game “wasn't a classic” but had delivered a vital result.

“It wasn't a great game or a great performance from us but cup football is all about getting through. And overall I thought we merited that,” he declared.

The game started fairly quietly. Dumbarton won a couple of free kicks in promising positions, but nothing came of them.

The first real chance for Sons, who had rather more of the ball in the opening period, fell to Colin Nish on 13 minutes. Supplied by Scott Linton on the flank, his header from a central position went past the post the left.

A minute later Jordan Kirkpatrick fired in a strike from outside the box on the right. Again the ball veered just off target.

Next Scott Agnew volleyed wide from 20 yards after Nish knocked the ball back for him.

At the other end, Ryan McCord fired in for Alloa Athletic, but his effort was well held by Sons 'keeper Stephen Grindlay, in the first of a series of important stops throughout the match.

Moments later the home side almost went ahead. Grindlay got down to save from Andy Kirk, but McCord would have had the rebound in the net were it not for a fine tackle from Paul McGinn, who then cleared on the left.

Darren Young's right-footed shot for Alloa also went wide. With more clinical finishing, the Clackmannan side might have been in front.

As it was, Dumbarton took the lead thanks to a well worked cross-field move just after the half hour.

Agnew trapped a cross well, turned and put the ball across the face of the area to find Nish on the far post. He made no mistake with a straightforward finish, putting Sons 1-0 in front, to the delight of a vocal travelling support.

Alloa pushed back. Graeme Holmes put in a left-footed effort from outside the box, but once again Grindlay was there to save in the bottom right-hand corner.

Then on 40 minutes home 'keeper Scott Bain rushed out as Chris Kane broke through on the left, bundling the young striker down as he stepped past and attempted to swing the ball towards goal.

The referee had no hesitation in pointing to the spot. Up stepped Kane, who has scored in every appearance since his loan deal with Premiership side St Johnstone.

This time luck was not on his side, however. Firing to the right, his spot kick was well anticipated by Bain, who got a hand to the ball to knock it clear, sustaining an injury himself in the process – and being replaced by substitute goalie Craig McDowall for the beginning of the second half.

It was a moment of disappointment for the Sons, who missed the opportunity to go into interval with a more secure 2-0 lead. Two further corners for the visitors were not able to engineer another chance.

Within minutes of the restart, Dumbarton had another opportunity to extend their lead. This time Mitch Megginson rose to head towards goal from a Scott Linton assist, but his attempt missed narrowly on the left.

Chris Kane won one of a number of free kicks on 48 minutes. Jordan Kirkpatrick struck in from the right, blocked this time by Daryl Meggatt.

On 51 minutes Colin Nish had another chance, but spooned his shot over the cross bar following a flick on from Kane.

Sons almost paid for squandering chances a couple of minutes later. After a goalmouth scramble, Kevin Cawley hit the post. It was something of a let-off.

Kane had a couple of decent opportunities as Sons pressed forward. First, he miskicked after Gilhaney won the ball for him. Then he was inches away from meeting a free kick from Kirkpatrick.

Scott Linton nearly extended Dumbarton's advantage on 70 minutes, as a fierce drive from nearly 30 yards smashed against the bar and over.

Five minutes later, Cawley cracked a net-bound shot in from an acute angle, but it was blocked.

Alloa substitute Edward Ferns, who had come on after an hour, was proving a bit of a handful for the Sons back line.

He nearly scored on 77 minutes. Dumbarton 'keeper Stephen Grindlay pulled off another great save to keep his team in front.

Kirkpatrick missed to the right as Dumbarton tried to lessen the danger of a last-minute hitch by moving forward when they could.

Next a strong, right-footed effort from Linton was blocked by the Alloa back line.

On 86 minutes Scott Agnew gave way to Garry Fleming. Cawley continued to apply pressure for the Wasps, and Sons' Kirkpatrick was yellow carded for an enthusiastic challenge, joining skipper Graham in the book for an earlier infringement.

In what turned out to be virtually the last move of the game, Colin Nish was given warm applause as he was replaced by Bryan Prunty for Dumbarton a minute into four of time added on.

The visitors lived slightly dangerously at times towards the end of the match. But they did more than enough to claim a deserved and famous Cup win.

The last time Sons got this far in Scotland's premier cup competition, the second oldest in the world, was in 1978/79. In that season they beat Alloa 1-0, Clydebank 3-1 and then lost 1-0 to Partick Thistle in the quarter-final.

Dumbarton enjoyed fine support throughout the tie, with two buses laid on by the Sonstrust, and many more supporters travelling to Clackmannanshire by rail and car.

The celebrations went on long into the night.