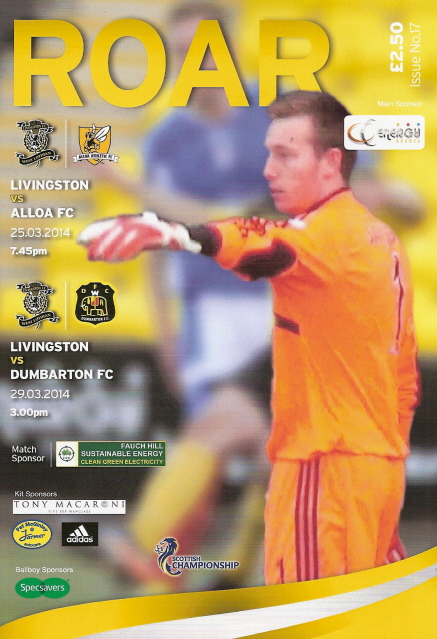 THIS beast of a match wasn't so much a game of two halves, as one of five minutes versus the other 85 – with Sons claiming victory and three crucial points right at the end, when hope seemed to have drained away.

Afterwards, manager Ian Murray was still feeling sore at having been sent to the stand at half time for dissent, but he was obviously delighted at grabbing the Livingston win, which puts Sons in sixth place in the SPFL Championship, with one game in hand over this afternoon's rivals, who are level on points but a single goal better off.

Up until the penalty that enabled Chris Turner to put Dumbarton even on 86 minutes, the game had shared too much of the depressing aura from Falkirk.

After that previous match, assistant boss Jack Ross, who had been in charge from the touchline, observed: "Undoubtedly it was a below-par performance. However as a group of players the squad has performed magnificently over the course of the season to date and therefore as a management team we have total belief in their ability to produce a positive reaction.”

That prediction proved quite correct in the end, despite the frustrations experienced for much of the Livingston game.

Jordan Kirkpatrick and Steven McDougall got the game underway for Dumbarton, with the sun occasionally poking its face through an otherwise cloudy afternoon.

Sons started with more energy, but the Lions were enjoying too much time on the ball and too much space in the middle of the park for much of the first 45 minutes.

Early on Chris Turner put a good ball in for Colin Nish over the top of the Livi defence, but the big striker could not quite balance himself and turn to take advantage of the half chance.

At the other end Danny Mullen swung in a dangerous looking cross, but there were no Lions strikers to get on the end of it.

There was a slight hold up after Nish sustained a blow and had to change shirts because his original numbered one had blood on it.

On 27 minutes, against the overall drift of play, Livingston went a goal in front.

The unmarked Nejc Mevlja did the damage with a straightforward, punchy header from a corner supplied by Kheagan Jacobs. There were tow other barely marked attackers in the box.

Chris Kane went for what Dumbarton fans now know as “the Bryan Prunty spectacular”, with a close range overhead kick at a tight near post angle. The ball went just over the bar.

Moments later Sons almost paid once again for not picking up their man at the back.

This time Mullen was the beneficiary of a free header which flew directly at Jamie Ewings from a free kick that followed an infringement and booking for McDougall.

The last few minutes of the half was packed with incident. Ewings had to wheel back to stop a decent Livi effort from distance.

Then there was a great chance for Sons. Kirkpatrick's free kick found Nish at the back post, but he fired wide from around six yards out.

Nish then had another pot. His shot from range went wide of the far post.

The first half ended on a firey note. Sons felt that a throw-in hadn't hone their way when it should have, and Kirkpatrick was the victim of a tough late challenge that produced no free kick or punishment.

After the break Dumbarton staged a significant fight back, though the game was held up again for a time while substitute Jason Talbot received treatment after a clash which Sons fans felt should have been seen differently.

A great save from Lions' goalie Jamieson succeeded in tipping Kirkpatrick's effort wide of the post, to the obvious relief of the home support.

The resulting corner saw Dumbarton pile on yet more pressure on the home defence.

Mullen headed over at the back post once more for the hosts, as Livi broke threateningly from a Dumbarton attack.

On the hour Mark Gilhaney replaced Steven McDougall in the first swap of the afternoon from Ian Murray and his bench team.

Efforts from Mark McNulty and Kyle Jacobs tested Ewings. He made an especially good save block a close range effort after previously spilling a shot.

On 65 minutes Colin Nish left-footed a shot in from the left side of the box. He went close, but missed to the right.

The industrious Mark McLaughlin flicked the ball on for Chris Kane and he tried to lob the Lions' 'keeper, but his attempt was blocked.

There was a robust penalty claim shortly afterwards when Chris Kane appeared to have been tripped and bundled down in the area. Nothing was given.

On 81 minutes Livi's Talbot was shown an uncontestable straight red card for violent conduct after throwing a head-high boot in the face of Dumbarton's Paul McGinn. It proved to be a telling moment.

On came Bryan Prunty for Mitch Megginson as the pressure ratcheted up on the home side.

With 5 minutes to go, Sons were awarded a spot kick for a push that seemed softer than the one that had just been turned down.

Up stepped Chris Turner. He made no mistake, firing home on 86 minutes to level the scoreline with all to play for.

The momentum was with Dumbarton now. Garry Fleming's decent effort shot was saved and Kane rushed in to claim the rebound and make it 2-1.

Livingston were stunned. They charged forward, with even 'keeper Jamieson coming into Sons' area for the first of two corners handled ably by the back line.

The final flourish was to no avail. Dumbarton had claimed a famous last-ditch victory.

“The players are determined to finish the season in a manner befitting of what they have achieved to date and at this crucial stage the continued positive backing of the fans is of great importance,” commented assistant manager Jack Ross afterwards.

Next up for Sons is a midweek trip to take on local rivals Greenock Morton, before a home game against Alloa Athletic on Saturday 5th April.