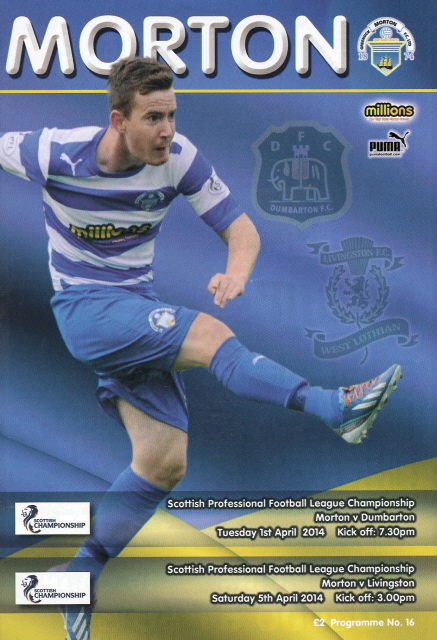 A VERY disappointing performance from Dumbarton at Cappielow resulted in a dispiriting away defeat to Greenock Morton.

Gaffer Ian Murray said after the match: “It was a disappointing defeat and could have been more than three goals.

“If we lose another game and the difference goes to nine points it's over. I think the players are just a bit leggy now and showing signs of tiredness.”

Morton played well and without the fear that might have been expected on the brink of relegation. But Dumbarton also allowed them too much time and space, particularly in the middle of the park.

Things started well for Sons, with Scott Agnew's early shot from outside the box going just high and wide to the left.

But the 'Ton were soon on the move, winning four corners in quick succession over the next six minutes and keeping the visitors under pressure.

Thomas O'Ware got in a header which served as a warning to Dumbarton, Scott Taggart's effort was knocked away, while Barrie Mackay's strike called for a decent save from 'keeper Jamie Ewings.

Meanwhile Sons' Northern Irish midfield anchor Chris Turner sustained a nasty blow which resulted in blood gushing from his head. He went off and returned with the wound bandaged.

Shortly afterwards, with just 13 minutes on the clock, Morton went 1-0 in front.

Once again it was a header from an unmarked player that did the damage. David Robertson swung the ball in for the home side and veteran Rowan Vine rose to nod the ball home. It was all too easy.

On 18 minutes Hugh Murray had to come on for Turner because of suspected concussion.

The pressure continued. Dougie Imrie's strike was stopped. Then Marc Fitzpatrick fizzed in a shot which flew wide to the left of Ewings' post.

It looked as if Dumbarton had pulled level when Chris Kane netted. A goal for the visitors could have made a massive difference at this stage of the game. But Chris Kane was ruled offside.

Dumbarton's second real effort came just short of the half hour mark, when Mitch Megginson right-footed a shot in from outside the box, which was saved by Derek Gaston in the centre of the goal.

Ten minutes later Morton went two in front. Thomas O'Ware shook off his marker in order to take advantage of another inswinger and head past Ewings.

By the break Sons were well behind and still on the back foot.

Dumbarton's Jordan Kirkpatrick and Scott Agnew got the match underway for the second half.

Sons seemed more determined. Gaston got down well for Morton to hold the ball following a low Kirkpatrick cross with Kane lurking.

Next, Megginson supplied Kane once more, but the young attacker's 18-yard effort was held by the Greenock goalie.

Kirkpatrick had another strike blocked, before Mikey Miller was forced to make a vital goal-line clearance to spare Dumbarton further embarrassment at the other end.

Morton launched a series of fast, agile counterattacking moves which had Sons reeling. The final one clinched the game. Barrie McKay went on an excellent individual run, finishing in style to make it 3-0 to the home team.

There was no way back for Sons after that, unfortunately, even with over half an hour left to play.

Bryan Prunty and Garry Fleming were brought on by boss Ian Murray, in place of the struggling Colin Nish and Scott Agnew.

Prunty had little chance to make an impact and Fleming proceeded to pick up a booking and risk further punishment for a robust challenge near the end.

Things could have got worse for Dumbarton. A fine punt from Imrie curled just wide of Ewings' top corner.

The Sons goalie then made a superb save from an O'Ware header before Vine blasted wide when it looed easier to score.

A penalty shout from Dumbarton was half-hearted and the referee saw it has ball to arm.

A Garry Fleming booking means that he misses the Raith Rovers game on Saturday 12th April.

For Dumbarton, Paul McGinn had an effort saved, while 'Ton stalwarts McKay and Vine went close.

Heading into time added on, Mark McLaughlin's left-footed shot from outside the box went high and wide to the right.

Next up for Dumbarton is a visit from Alloa Athletic to the Bet Butler Stadium on Saturday 5th April, when the men from the Rock will be aiming to get straight back to winning ways.