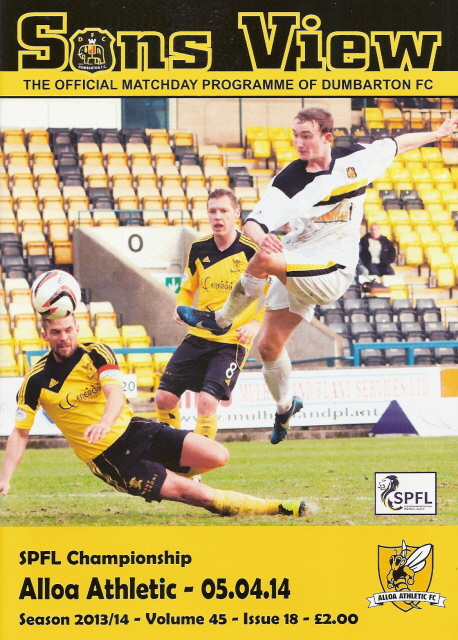 DUMBARTON stormed back from midweek defeat to claim a convincing, comfortable three-goal victory against Alloa Athletic at the Bet Butler Stadium.

The win means that Sons have now gone thirteen games without defeat against the Wasps, and keeps the men from the Rock in the race for a promotion play-off place – albeit as outsiders.

A second half burst by Dumbarton proved the big difference between the two sides, after a vital foothold was secured in the first half.

Commented gaffer Ian Murray afterwards: "The win pretty much means that we'll be playing Championship football again next season although the arithmetic suggests that Cowdenbeath could still catch us.

"I said at the start of the season that we were good enough to stay in the league and now we're looking up rather than down,” he added.

Alloa got the game underway, with Sons shooting away from the home support and towards their opponents' end.

The visitors had the first chance on goal after just over two minutes. Graeme Holmes put in a left-footed shot from the centre of the box, but crucially it was blocked by Paul McGinn.

In the opening period Wasps had the better of the play, but never looked threatening, while Sons had a number of chances.

After Alloa 'keeper Scott Bain pushed away a Garry Fleming shot, big Mark McLaughlin headed the ball across goal from the resulting Jordan Kirkpatrick corner. But there was no Sons shirt to head home.

Mark Gilhaney was next to test Bain, before a searching ball from McGinn almost found the oncoming Mitch Megginson at the far post.

Dumbarton finally went in front on 24 minutes when Mark Gilhaney clipped a ball into the net against his old club, following some more good work by McLaughlin and an assist by Colin Nish.

It was twelve more minutes before there was another genuine opportunity in a tight game.

First Bryan Prunty drove in from the centre of the box, his effort going high over the crossbar.

Then at the other end Alloa Athletic's Michael Doyle required Sons stopper Jamie Ewings to pull off an important save to his right.

Almost a minute into time added on the Dumbarton 'keeper went low the opposite way to prevent Darren Young from equalizing.

The visitors wasted a chance to draw level just before half time when Dumbarton lost the ball in the middle of the park.

Sons went into the break with their single goal lead intact.

In the second half Dumbarton came out with resolution and it took just three minutes before they could extend their advantage.

Garry Fleming's decisive shot took a deflection and then tipped into the net via the post to make it 2-0.

Megginson had a chance thwarted just after the restart, and Colin Nish had two decent opportunities to make it three – turning a header into Bain's hands and then firing off target.

In between, Alloa's Daryll Meggatt was unable to find a way through.

Gilhaney went into the referee's notebook for a yellow card offence before Ryan McCord blasted high for the Wasps just short of 58 minutes.

On 62 minutes Andy Kirk was given a free header in the centre of the goal, an unfortunate recent habit for the home side. Thankfully it went straight at Ewings.

Popular loan striker Chris Kane was brought on in place of Garry Fleming on 65 minutes, as Ian Murray sought to ring the changes from the bench.

Shortly afterwards a knock to Bryan Prunty gave Scott Agnew an opportunity to make his case.

It looked to be three for Dumbarton when substitutes Kane and Agnew burst through to be two on one against the Wasps' goalie on 75 minutes, but somehow the ball stayed out of the net.

Cawley had another chance for the visitors as Alloa pressed forward, winning a couple of corners in quick succession and seeking the goal that might get them back into the game.

Instead it was Sons who extended their lead to a comfortable 3-0 on the threshold of 80 minutes, as Agnew scored with a screaming shot in off the crossbar.

Then moments later Kane made it 4-0 with a close range header after a good build up and nod-on from Colin Nish.

Substitute Liam Caddis took a tiny bit of the shine off a big win by pulling a goal back for Alloa near the end.

However Dumbarton came away with a thoroughly deserved, morale boosting three points.

The Sonstrust Man of the Match was the ever-impressive Paul McGinn, topping a solid team performance.