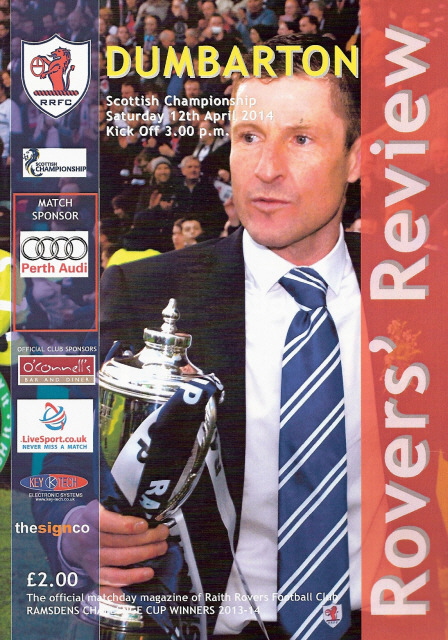 DUMBARTON will play their football in, at least, the SPFL Championship next season as a 3-1 win over Raith Rovers secured division safety whilst keeping the promotion play-off dream alive.

Goals from Mitch Megginson and Mark Gilhaney put Sons 2-0 up at the break, before Colin Nish added a third in the second half. Gordon Smith replied for the hosts who then had Dougie Hill sent off late on.

Raith went into the game on the back of a Ramsdens Cup Final victory over Rangers, who Dumbarton will face next season, and there were early signs of a cup hangover from the Kirkcaldy side.

Scott Linton had an early shot which tested Lee Robinson, the Rovers keeper managing to save and hold the ball following the left-backs drive from the edge of the area.

Garry Fleming was next to test the home side goalie. He put Robinson under pressure that resulted in a Sons throw in. The long throw from Linton, however, was flicked on before being brought under control by Robinson.

Callum Elliot had an opportunity for the home side just after. His swerving effort from the edge of the area went just wide of Jamie Ewings' left hand post.

Dumbarton's best chance up to this point followed. Nish flicked on a ball for Fleming to run on to. Fleming did so, shrugged off his man, and shot for the far corner from a tight angle but Robinson parried the ball out before it was scrambled clear.

Another opportunity followed for Sons. Jordan Kirkpatrick's corner was won by Skipper Andy Graham only for his shot to be saved by Robinson, and gathered at the second attempt.

Despite the majority of possession and chances, it was Raith who actually came closest to breaking the deadlock.

Fleming headed a free kick from the left hand side for his own goal that looked destined for the net. However, Ewings was there to tip the ball on to the bar, saving Fleming's blushes and keeping the scoreline level.

Chris Turner then came close to finding the first goal of the afternoon as his left foot effort from 25 yards flew just wide of the bottom corner.

But then, on 22 minutes, Dumbarton finally got the opening goal.

Kirkpatrick's free kick was flicked on by Fleming, and the ball found it's way to Gilhaney at the back post who drilled a low shot into the far bottom corner.

Raith picked up their performance after. Some heroic defending from the Sons defence and a great block from point-blank range from Ewings keeping them 1-0 up.

Rovers came even closer to equalising after with a curling shot deflected just wide of the corner.

And then, Dumbarton made it two.

Megginson picked the ball up 20 yards out and got past two men before firing past Robinson into the net.

There was nearly time for a third just before the break. Paul McGinn's low cross was nearly met by Nish but a combination of good defending and the ball being too far ahead of him meant he couldn't get on the end of it.

However, Nish didn't have to wait long after the break to get his first and Dumbarton's third.

Gilhaney shot for the far post, and with a real striker's instinct, Nish stuck out a leg to wrong foot the keeper and put the ball in the other corner.

Sons then had two great chances to kill off the game by adding a fourth.

First, Megginson hit the side netting after capitalising on some poor Raith defending, and then Nish was sent through on goal only for the ex-Hibs man to cut back on to his left, and then back on to his right before eventually firing over the bar.

It looked like these missed chances would come back to haunt the away side as Raith changed the complexity of the game with a goal.

Smith superbly curled the ball into the net from 20 yards following a corner, with no Sons players closing down following the set piece.

The game was mostly one way for a small period, with the hosts looking like they might add another goal to their tally.

A succession of corners were won but Dumbarton managed to stand tall and mop up any pressure, whilst looking dangerous going forward with Fleming, Nish, Megginson and Gilhaney leading forward attacks.

Sons were then forced to make a change. Jordan Kirkpatrick hobbled off to be replaced by Scott Agnew. Chris Kane replaced Colin Nish soon after.

There was one more key event to occur before the ninety were up.

Dougie Hill was shown a straight red for the home side after pulling down Fleming when he raced clear. The resulting free kick was fired over by Fleming.

As time ticked down, McGinn picked up a late booking before the hardworking Fleming was replaced by Hugh Murray for the closing minutes.

The result means Dumbarton are now level on points with Queen of the South, who visit the Bet Butler Stadium on Saturday 19th April, in what is sure to be an exciting game in determining who takes the final play off spot in the SPFL Championship.