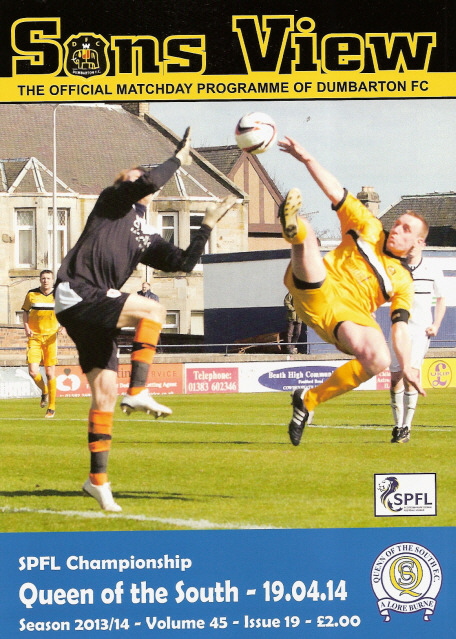 Boss Ian Murray told the media afterwards: "The scoreline didn't do justice to us. I thought we were the better team overall." He vowed to pick up the side for their final two, crucial games against the Championship's top teams.

Dumbarton looked sprightly at the beginning of the first half, but it was Queens who went ahead against the run of play. Then two goals within 15 in the second half secured the game for the visitors.

Sons got the crucial game underway, shooting towards the full away end of the stadium.

An early corner nearly created the first chance for the home side, but at the end of the move Mark Gilhaney's cross went too far over the area to create any real danger.

More of the pressure came from Dumbarton in the first 15 minutes. However, Paul Burns almost broke through for Queen of the South, before Andy Graham intervened with a vital blocking challenge.

Then Jordan Kirkpatrick whipped in another corner which nearly sneaked into the net at the back post, before going just over.

On 16 minutes Scott Linton's left-footed shot from outside the box went close, but missed to the left of the goal from a direct free kick.

Moments later Queens were in front, against the general run of play.

A mix up at the back involving Mark McLaughlin and Andy Graham left Sons 'keeper Jamie Ewing stranded. Ex-Son Iain Russell had the relatively simple task of nodding the ball over him and into an empty net to the dismay of the home team, fans and bench.

Michael Paton put in another shot for Queens after the restart, missing to the left as Sons reeled momentarily.

It looked as if Dumbarton had drawn level shortly afterwards when Colin Nish fired low past Queens goalie Zander Clark. However, the assistant on the far side already had his flag out for offside.

Then Mitch Megginson weaved his way past two visiting defenders before firing wide of the far post.

Chris Kane almost created another chance for the Dumbarton number 9, but his attempted assist was knocked out for a corner.

Sons pressed with renewed urgency after the break, starting brightly and quickly gaining a corner which was equally rapidly cleared.

On 50 minutes Kane had the first of two opportunities, one with his left and one with his right foot set up by a nod down from McLaughlin.

The second chance saw him test Queens goalie Zander Clark rather than lay off the ball to Megginson.

Sons' opponents then launched a swift counter-attack with devastating consequences.

Derek Lyle left-footed past Ewings and drove the ball into an empty net after an assist from Russell, making it 2-0 on 52 minutes.

Dumbarton looked for a swift reply, but could not find a clinical touch in the final third.

Scott Agnew came on for Jordan Kirkpatrick on 64 minutes, as Sons looked for fresh options.

Then two minutes later, just as if it seemed the plot my twist again, Kevin Holt made it 3-0 for Queen of the South. His superb strike from outside the box followed a stumble from Colin Nish, who had otherwise performed well for Sons.

Dumbarton worked hard but could not fight their way back into the match after that killer blow.

In two further adjustments for Sons, Bryan Prunty replaced Scott Linton on 68 minutes and then Steven McDougall came on for Mitch Megginson with another 12 left on the clock

The final period of the game produced a sometimes bad-tempered scramble for further advantage for Queens or a chance of recovery for Sons.

Two further half chances followed before the end of the game. McLaughlin headed at Clark from an Agnew corner, before Nish put the ball across goal only to see it cleared before anyone could get on the end of it.

It is still mathematically possible for Dumbarton to make the play-offs, though they have to win their final two matches and see Queen of the South pick up only two points from theirs.