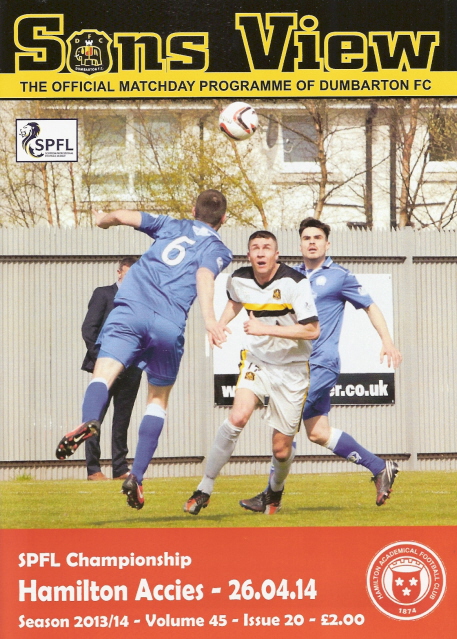 DUMBARTON produced a superb result for their last home game of the season, storming past title-contenders Hamilton Accies with three second half goals in an exciting finale at the Bet Butler Stadium.

The atmosphere of the game was electric throughout, with the home support being boosted by a vocal half-dozen Swiss Sons, who had flown over for the occasion to join celebrations of a remarkable season.

Sons boss Ian Murray was full of praise for his players and staff after the match, hailing a “thoroughly deserved” victory in what was, overall, a tight and competitive game.

A match that ended in goalmouth drama and a sending off started warily enough, with both sides knowing they had a lot to gain or lose as Mark Gilhaney and Scott Agnew got proceedings underway.

Hamilton had more of the chances in the first half, with the first real opportunity going to Accies' Grant Gillespie with less than two minutes on the clock. Thankfully for the home side, his right-footed strike from the centre of the box went high over the bar.

Dumbarton won a corner, conceded by Jesus Garcia Tena, but were unable to capitalize on it, or some of their earlier forward movement.

The challenges were robust, as both teams showed determination, if also a little nervousness on the ball.

Mitch Megginson had to receive treatment after two strong tackles, but was able to continue.

There was a Penalty appeal for the home side when Garry Fleming latched on to a long ball and looked to have been pulled down, but nothing was given.

The next real chance, on 12 minutes, fell to the experienced and persistently dangerous journeyman, Jason Scotland. His shot from 20 yards was securely held by Sons 'keeper Jamie Ewings after taking a slight deflection.

The same player then got in behind Sons' defence in a menacing position, only to be blocked by Mikey Miller, who later picked up the Sonstrust Man of the Match award, presented by Claire and Tristan Stock from Blackburn.

Scotland tried again with a header a few minutes later, as both sides sought to assert dominance in the middle of the park, with Dumbarton content to allow Hamilton possession before trying to force the pace when they grabbed the ball.

A clash of heads between Scotland and Sons' skipper Andy Graham led to both being treated by their teams' physios. Thankfully both players were able to resume after a short delay.

It was Scott Agnew who finally opened the scoring for Sons just after the half hour. He had already tried a couple of free kicks from distance. It was his third attempt that finally struck lucky.

The midfielder's inswinger from 25 yards on the right of the field somehow skidded and bobbled past the hapless Accies defence and into the bottom corner of the net to make it 1-0, to the delight of Sons' players and fans.

In fairness the goal had gone somewhat against the initial run of play, but the breakthrough seemed to give a boost to both sides.

Hamilton pressed back. Anthony Andreu fired wide of the far post as the visitors continued to look dangerous, though short of the form that might have been expected from league leaders.

Brian Prunty nearly added a second for Dumbarton when Scott Agnew's free kick was met by him and his ball across goal was very close to sneaking into the corner of the net.

In fact it was Accies who scored next, leveling at 1-1 on 41 minutes. Perhaps inevitably it was Jason Scotland who ended a well-worked move with a low driving shot past Sons 'keeper Ewings.

Dumbarton were disappointed but not daunted. Prunty missed the target very narrowly from 20 yards with a dipping volley.

In the end there was no further scoring before the break, with the 1-1 scoreline pretty much reflecting proceedings on the pitch.

However, the visitors had a raft of chances at the beginning of the second half, but could not take advantage of them.

A mazy run from Ali Crawford was pushed away by Ewings before Ziggy Gordon fired the rebound over the bar.

Then Louis Longridge capitalised on a short back-pass from Chris Turner. Ewings blocked his effort well with his legs to keep the score level. Sons were living dangerously.

At the other end, Megginson's cross nearly caught Accies' goalie Kevin Cuthbert out. In the end it dipped and fell onto the roof of the net.

The action was really hotting up as both teams went for a killer blow in a vital game.

Garry Fleming did well to turn his man and close in on goal, only to have his attempt well saved by Cuthbert. McGinn then fired a shot from the resulting corner over the bar.

At this stage Hamilton still looked closer to scoring again.

Only a fantastic goal-saving challenge from big Andy Graham prevented Jason Scotland in his tracks and stopped him giving the visitors the lead at a crucial period in the game.

Three further corners in quick succession for Accies were all defended well by Sons, but something was needed to relieve the pressure.

Hamilton fluffed a series of opportunities from close range. For Dumbarton, Megginson's drive from 20 yards deflected into the side netting.

The match looked like it might be heading towards a stalemate until Sons gaffer Ian Murray introduced first Colin Nish for Brian Prunty after the hour and then Jordan Kirkpatrick for Scott Agnew 13 minutes later.

In the meantime, a comedy of errors nearly saw Sons go 2-1 up. Fleming beats Garcia to a long ball, before cutting across for Nish. Two Hamilton defenders collided, knocking the ball just wide in the process.

In fact it was Nish who struck next, with a simple nod in from the edge of the box after the second of two goalmouth scrambles. Megginson had been the supplier and it was the big forward's second header attempt in the same sequence. The home supporters erupted in delight.

Suddenly the momentum was all with Dumbarton, as the visitors looked deflated by the sudden reverse.

Drama followed, with Hamilton player manager Alex Neil being sent off for violent conduct against Mark Gilhaney as the temperature rose and tempers flared.

Two minutes later Nish set up Jordan Kirkpatrick for a fourth Dumbarton goal. His shot from the centre of the box beat Accies goalie Kevin Cuthbert and spun into the bottom right corner of the net.

Sons looked comfortably in control of proceedings at this point, and could have added a fifth or even a sixth as Accies looked broken, tumbling from top spot in the SPFL Championship – which has been an exciting race right across the division in 2013/14.

The decisive win, which achieved revenge for the reverse scoreline at Hamilton near the beginning of an eventful season, was greeted with huge enthusiasm by a vocal home support.

The win has not been quite enough to propel Dumbarton into the promotion play-offs, with Queen of the South winning to claim that spot, but it sets up a what will hopefully be a pulsating season closer at Dundee on Saturday 3 May.