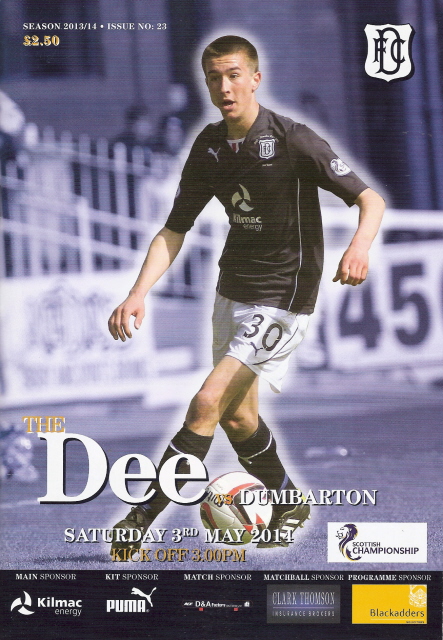 DUMBARTON ended a momentous season with a very strong performance against Dundee, being unfortunate to lose out in the end to just the odd goal in three at a packed Dens Park.

Sons were sprightly on the ball in a tense, competitive first half. Indeed the visitors probably had more of the chances before Dundee went ahead on 25 minutes.

A second before the break gave the home side a commanding lead, but Dumbarton stormed back in the second half, pulled a goal back from the spot, and came very close to equalizing late on.

After the game boss Ian Murray paid tribute to the extraordinary effort and skill of his players throughout the game, but expressed disappointment and anger at two penalty decisions, one of which he and most observers declared to be “a stone-waller”.

Nevertheless, the 2013/14 season ended on a high, with rapturous applause for the Sons' squad from their fans at the end, as Dundee celebrated an SPFL Championship title win achieved by the narrowest of margins.

It was Sons who got the game underway in front of a vocal away support of 350+ in a stadium full to the rafters. The official attendance was 10,718.

Both teams were desperate for a result and the match got off to a flying start, with concerted attacks at both ends.

On nine minutes former Blue Colin Nish had the first real chance. His header from close range was grabbed high in the centre of the goal by Dundee 'keeper Kyle Letheren.

Moments later Mitch Megginson broke through on the right. Slightly unbalanced by the determined attentions of William Dyer at the back, he fired wide of the post and upright. But it was a solid effort, the first of several for Dumbarton.

At the other end, Martin Boyle shot wide to the left for the home side, while Sons goalie Jamie Ewings made an important stop from Gavin Rae.

The pace of the game was up-tempo in the first 20 minutes, with robust challenges flying in from both teams across the park and the noise and atmosphere ratcheting up the pressure.

Peter MacDonald for Dundee and Scott Agnew for Sons had efforts blocked on the edge of their opponents' respective areas.

Jim McAlister tried to squeeze a goal in from the left side of the six-yard box on 22 minutes. However, Ewings proved well up to the task of stopping it.

Then on 25 minutes Dundee got their breakthrough. A softly conceded free kick gave Kevin McBride the chance to swing in a cross which the dangerous Christian Nade raced in for.

He shook off his marker and placed a looping header just beyond the fingertips of the onrushing Sons 'keeper to make it 1-0.

Frustratingly, this was precisely the kind of punishment Dumbarton had suffered from loosely tracked dead-ball situations on a number of occasions throughout the season.

But Sons did not buckle and came straight back at their full-time opponents.

Minutes after the opener, Colin Nish almost equalised for Dumbarton. His well-timed effort flicked agonisingly off the corner of the upright and bar.

The game seemed to have settled down again when Dundee made it 2-0.

Peter MacDonald, allowed too much time and space, unleashed a strong, low drive into the lower right-hand corner from 20 yards.

Unfortunately, Ewings could not quite get down fast enough to stretch out a hand to block it.

In the remaining ten minutes of the first half there were no clear-cut opportunities for either team, and the pace relented just a tiny bit as both sides took stock.

The Blues decided to sit deeper after the break, leaving Sons to press forward in search of a much-needed goal to bring them back into the game.

On 46 minutes Dumbarton made their first change of the afternoon. Megginson had sustained a knock and was replaced by influential on-loan striker Chris Kane.

Scott Agnew, who along with Mark Gilhaney and others was putting in an impressive display for Sons, had cracked in a trademark left-footed shot from outside the box, It was well saved by Letheren in the top right corner.

Christian Nade continued to menace with several breaks. On 51 minutes he hit Dumbarton's right post with a haeder from a central position seven yards out.

A succession of corners followed at both ends. Rae missed a chance for Dundee, as his strike limped past the post.

Prunty, Agnew and Gilhaney had attempts on goal in rapid succession as Dumbarton dominated proceedings in the second half. Gils' header came closest.

On 64 minutes, Jordan Kirkpatrick was substituted for the durable Chris Turner in the final Sons switch of the afternoon and campaign.

Another Colin Nish header on 65 minutes went close, as Sons continued to search for a way back into a tempestuous match. Dundee fans looked increasingly nervous as the mounting score for rivals Hamilton Accies against Greenock Morton came in via mobile phones around Dens Park.

The anxiety peaked when Willie Dyer tripped Bryan Prunty in the area and referee Bobby madden pointed to the spot.

Up stepped Scott Agnew. He made no mistake, driving the penalty home into the upper right-hand corner of the net, past the outstretched arm of Letheren.

It was 'game on' as Sons came rushing forward and Dundee, second best at this point, started to look nervous on as well as off the pitch.

Gilhaney had a shot saved for Sons on 70 minutes, and not long afterwards Agnew fired just wide. The tension was building as the virtual cricket score in the Hamilton match started to filter through.

Could there still be a dramatic turnaround and denouement, with Sons as effective kingmakers?

Paul McGinn and Scott Agnew had further efforts blocked as Dumbarton continued to press their case.

Meawhile, Peter MacDonald pulled another good save out of Jamie Ewings as Andy Graham continued to marshall the defence powerfully. But most of the chances were Sons'.

There were two strong penalty shouts for Dumbarton which could have resulted in a dramatic outcome in the closing stages.

One foul had involved shirt pulling, starting fractionally outside the box but continuing and finishing in it. That was a decision that could have gone either way.

But when Chris Kane was pulled down by Kyle Benedictus right on the edge of the area, with the ball well clear of him, everyone assumed that the referee would blow his whistle for another spot-kick.

Instead he glanced briefly at his assistant and play continued, to the fury and bafflement of the Dumbarton bench, players and supporters.

The home also side rode their luck towards the end, just escaping punishment from two goalmouth scrambles as Sons gave their all for a leveller.

In the final flourish of the match, a goal-bound, downward Kane header was blocked low with a superb save from Kyle Letheren. Then Jordan Kirkpatrick missed the target with only moments left on the clock.

It had been so near to being at least a point for Dumbarton, whose magnificent season ended with a highly creditable fifth position in the second tier of Scottish football.

The result means that Dundee go up to the Premiership in 2014/15 as Champions.