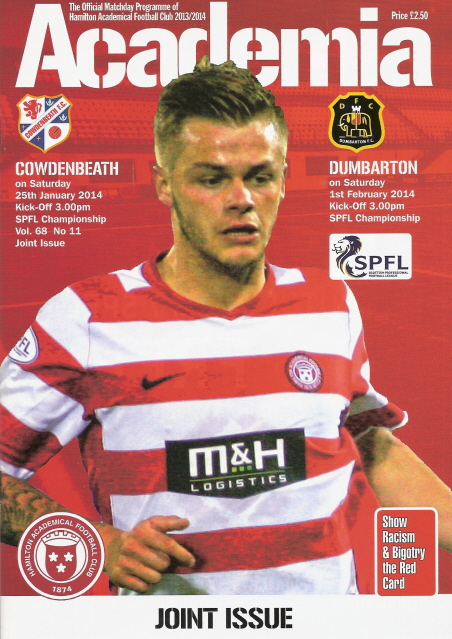 DUMBARTON grabbed a very valuable point from Hamilton Accies on a wet afternoon at New Douglas Park, and on some readings of the game might even count themselves a little unlucky for not snatching all three.

Then again, in fairness it could have gone either way. According to the official stats, Dumbarton had 53% of possession, while their opponents had 15 shots compared to 8 for Sons, illustrating the contrasting efforts of the two sides.

After the hard fought match, a delighted Dumbarton boss Ian Murray said: “I thought we showed real character to keep it going right to the end. It was one of these games, and although Hamilton will maybe feel hard done by... I thought we deserved the draw."

He added: "At this stage in the season taking something from a game like that could prove vital down the stretch."

The afternoon started brightly, but soon the clouds and rain set in. Jordan Kirkpatrick and Mitch Megginson got the match underway to a backdrop of vigorous support from the travelling fans.

Hamilton applied pressure on the Dumbarton goal from the outset. An early Jason Scotland header from the centre of the box was well saved by Stephen Grindlay.

On the just three minutes, however, the home side went into the lead. Mark McLaughlin and Colin Nish were unable to clear their lines and sharp Accies striker Jamie Keatings nipped in to crack the ball home from the edge of the box and make it 1-0. It was a frustrating start for Sons.

Hamilton wasted no time in going straight back into the attack. Dumbarton keeper Grindlay had to make another stop from Keatings immediately after the restart, and then a second five minutes later. It was clear who the main Accies danger man was.

Young forward Chris Kane, whose loan deal had just been extended this week, got the first real effort in for Dumbarton with a left-footed shot from a central position 18 yards out. But it went just past the post on 11 minutes.

After a shaky opening, Sons began to reassert themselves as the half moved on. Mark Gilhaney, Scott Linton, Colin Nish and Mitch Megginson began to apply real pressure on the Hamilton back line.

On 27 minutes the effort was rewarded. Linton's cross found Jordan Kirkpatrick, who smashed in a superb right-footed shot to equalise for Dumbarton.

Sons' supporters were also rejuvenated as the team began to press forward, scenting an opportunity to grab the lead before half-time.

Garry Fleming came on to replace Colin Nish for Sons on 33 minutes, following a knock to the big striker.

In the remaining 12 minutes of the half Scott Agnew had a couple of chances, while for Hamilton Keating continued to threaten and Scotland had a strong effort well saved by Grindlay in the bottom left-hand corner.

The Dumbarton 'keeper was also called into action again just before the referee blew his whistle to draw proceedings for the first 45 minutes to an end.

The second period began with Sons on the offensive, looking to capitalise on the momentum of the game – which seemed to be turning their way.

Not that Hamilton seemed any less dangerous. Michael Devlin had a header saved in the top right hand corner, before Mark Gilhaney burst through and struck a shot from outside the box which missed the far post for Dumbarton.

On the hour Accies made what they clearly hoped would be a second, key substitution as Ali Crawford replaced Paul George.

Just afterwards Jason Scotland left-footed a shot in from a difficult angle on the near post, bringing out another important save from Stephen Grindlay.

Then on 67 minutes Dumbarton went ahead for the first time in the game. Andy Graham flicked on a free kick, and in his effort to divert the ball away Stephen Hendrie deflected it into his own net to give Sons a 2-1 lead.

Crawford immediately started to manifest his threat for Hamilton. Hardly had the celebrations ended for the Dumbarton goal than the home side had equalised.

Darian Mackinnon put the ball across the area and James Keatings came in from close range to left-foot it home and claim his brace. The match was level again at 2-2 on 70 minutes.

Sons were not daunted, however. Scotland had another strike from outside the box, but his effort went too high.

Crawford tested Grindlay once more, with the latter winning that particular battle with his fingertips on 75 minutes.

Not long afterwards gaffer Ian Murray made another move from the bench, bringing on Bryan Prunty to replace Scott Agnew.

The popular front man had an immediate effort on goal, but his right-footed shot from a central position flew over the crossbar.

Another substitution for Hamilton was followed by Dumbarton replacing Mitch Megginson with Steven McDougall on 84 minutes. Both sides felt that the game was very much here to be won at this late stage.

On 87 minutes it looked as if the home side had done just that. Jason Scotland, who had been threatening to score for Hamilton all afternoon, finally got onto the ball at close range and fired into the centre of the net to make it 3–2.

It looked like a gut-wrenching final blow against Dumbarton, who had worked so hard throughout the game.

But immediately Sons raced down the pitch and created another chance. Mark Gilhaney put in a fine cross and Chris Kane dived in at the near post to head the ball in from the right. It was a goal taken from an incredibly narrow angle. The precision was a matter of millimetres rather than inches.

With the game levelled once more at 3–3, the roof nearly came off at the away end. Dumbarton supporters celebrated an equaliser that to them had the feel of a winner in the context of what had turned out to be an unlikely last-minute rescue job.

Sons held on for the remaining couple of minutes, plus three for time added on, to secure an important point against one of the Championship sides clearly vying for a promotion place.

It was definitely a job well done, especially since a couple of key players had been missing. On-loan Celtic youngster Michael Miller made his first appearance for Sons.