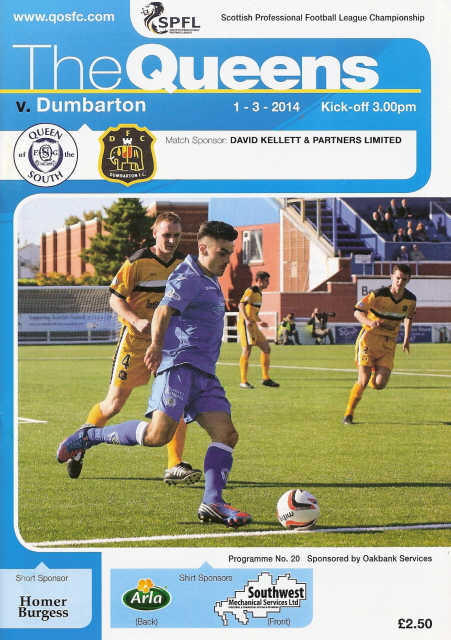 DUMBARTON'S remarkable eight-game unbeaten run finally came to an end in Dumfries, as they went down to Queen of the South at Palmerston Park.

Sons started positively and strongly, but gradually Queens moved into their stride, getting in behind the Dumbarton defence with direct, attacking pace and being allowed far too much time and space with the ball.

Gaffer Ian Murray pulled no punches in his comments to the press after the match.

"The first 45 minutes was a really poor performance," he declared. "Nobody in this league is good enough to perform like that and expect to win."

Dumbarton had their moments in what was often a highly competitive game. They also worked hard, but in the end were found wanting in most departments.

'Keeper Jamie Ewings had a difficult return after injury, there was not quite enough grit in the middle of the park until two later substitutions, and up front Sons lacked that extra bit of bite needed to turn opportunities into goals.

It nearly started so well for Dumbarton. With just over a minute on the clock Mitch Megginson right-footed a shot in from just outside the box. He was close, but the ball spilled out to the left.

An early breakthrough from Gavin Reilly at the other end showed Sons the challenge they would face throughout the game.

On this occasion, just a few minutes after the start, big Andy Graham came to the rescue with a superb, crunching, perfectly timed tackle.

So it was that Dumbarton were almost ahead, and then almost behind, before anybody had really settled into the game.

From the very start both sides showed that they were intent on winning this encounter. For Queens, ex-Son Iain Russell struck a ferocious shot against the upright from 18 yards out on seven minutes.

Captain Graham saved his side again when he headed away an incoming cross after the Doonhamers had caught the visitors on the break once more.

Then at the other end Chris Kane cut the ball back in for the onrushing Colin Nish, but the big man's shot was deflected wide.

Three minutes later Scott Agnew forced the home goalkeeper, Clark Zander, into a save in the centre of the goal.

There were a number of fouls within the first 20 minutes, indicating just how determined the two sides were to get stuck in.

An almighty scramble in the Dumbarton box almost proved fatal after Paul Burns burst down the wing and then floated a testing ball into the area. It was finally punted clear after some panic at the back.

Sons were starting to give the ball away too easily. Just on the half hour they were punished.

Russell won what looked to be a fairly soft free kick on the edge of the area. Chris Mitchell crossed and Mark Durnan rose into the air for Queens to head home from the resulting set play, with Ewings apparently caught in two minds.

There was a short stoppage in play as Mark McLaughlin received treatment following a knock to the head. He made a recovery and continued.

Kevin Holt blocked an effort by Scott Agnew for Sons just outside the box.

On 44 minutes Iain Russell popped up again to right foot the ball from a central position well over the bar.

As the first half moved into time added on Ewings did well to get down to a strike from Gavin Reilly in the bottom left hand corner of the goal. He was not so lucky moments later.

The Sons goalie conceded a corner that led to the second Queen of the South goal just before the break. Andy Dowie put the ball across and Reilly left-footed in a half volley from very close range. It was a gut-wrenching conclusion to the first 45 minutes for the visitors.

In the second half, Dumbarton began to pick up again. Nish came close but put his shot wide to the right.

On 50 minutes Bob McHugh had an attempt on goal from the left side of the box. His strike was well stopped.

Then at the other end Chris Kane unleashed a promising effort from a central position, which was saved by Zander to the left.

Over the next 15 minutes the game swung backwards and forwards between the two halves.

However, Queens still had the measure of their opponents in most departments, and looked effectively to have wrapped the game up at 3-0 on 65 minutes when McHugh found space for a fine, curving shot high into the right corner of the net.

Steven McDougall, Garry Fleming and Michael Miller came on for Sons in a triple substitution shortly afterwards, as boss Ian Murray sought to retrieve something from the match.

The impact was felt immediately when Miller struck home with a deflected shot from outside the box on 71 minutes, giving Dumbarton at least a lifeline at 3-1.

Fleming and Miller undoubtedly added steel to the central defence for Sons. However, Fleming was shown a yellow card on 76 minutes for an overenthusiastic challenge.

There were ironic cheers from the vocal away supporters on 84 minutes when Queen of the South replaced Iain Russell with Derek Young.

Sons continued to try to get a second goal and to make the closing period an anxious one for the home side, but to no avail.

Kane's left-footed shot from the centre of the box was saved in the corner by Zander. Agnew also had another attempt blocked.

The nearest Dumbarton came to getting on the score sheet again was when Kane came agonisingly close as he flew onto a Scott Agnew strike feet away from the Queens goal line.

In the end it was not to be for Sons on a grey afternoon at Palmerston. The defeat moves Queen of the South one place ahead of Dumbarton into fourth position in the SPFL Championship table.